The Miami Marlins have spent a lot of time talking about Giancarlo Stanton's future with other teams, but the new ownership has apparently ignored Stanton. New CEO Derek Jeter acknowledged at the GM meetings last week that he has not had any conversations with Stanton about the possibility of trading the National League MVP.

This is a mistake that might never be entirely rectified now that the Marlins already have started trade talks. To date, Stanton has been entirely gracious about the lack of communication, and by withholding complaints about being shut out of the process, he has effectively let Jeter & Co. off the hook publicly.

Where should Giancarlo go? 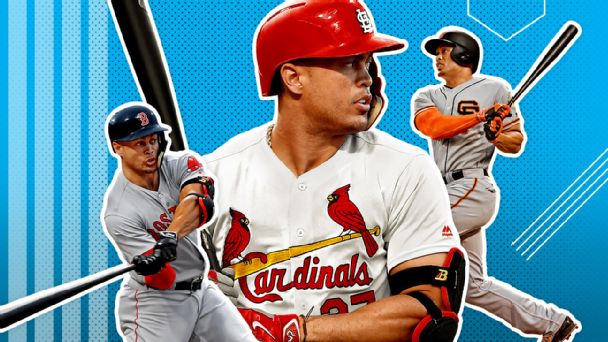 We pick the best landing spot for the 2017 NL MVP. Dan Szymborski »

Maybe that’s because he understands he is in a commanding position, and whether it’s now or later, the Marlins will have to come to him -- and in the end, he could and should play this to get exactly what he wants. Through his no-trade clause and his star power, Stanton has the leverage to ensure that his next home is where he wants to finish his career.

“This is why we negotiate deals like this,” said an agent who does not represent Stanton, referring to Stanton’s no-trade clause. “He was good enough for the Marlins to give him that contract, and to give him the no-trade protection. He should use it.”

Dan Szymborski detailed how Stanton might make sense for the San Francisco Giants, Boston Red Sox, St. Louis Cardinals and other teams, and how deals could be structured. Stanton is owed $295 million over the next 10 years, with an opt-out clause in his contract after the 2020 season.

But no deal can happen without Stanton’s approval, because of the no-trade clause in his contract.

And Stanton is in no way obligated to the Marlins or their new ownership to solve their debt crisis for them. If they bring a proposal to him in the next week or two and Stanton has any reservations about playing for a team he’s not prepared to wholly embrace, he should say no.

Whenever the Marlins get around to sitting down with him, he can tell his new bosses: Look, I signed this deal fully prepared to spend the rest of my career with Miami. I signed up to be the best and most expensive player on a team with a modest payroll, and that’s what I could be moving forward. Miami has become my home, and I have new digs here. I’ve played on bad teams here before, and I could stay. If you want to move my contract, well, you’re going to have to work out a trade with [whatever team I prefer]. If not, I won’t agree to a deal.

Some friends of Stanton believe if he could have his choice to play for any franchise, it would be the Los Angeles Dodgers. He attended Notre Dame High School in Sherman Oaks, California, about 15 miles from Dodger Stadium.

If that’s what he wants now, he can and should wait, simply by rejecting proposals to other teams. Because if he really wants to play for the Dodgers or some other team, eventually the Marlins would be forced to deal with the team Stanton has targeted.

It might not happen this month, it might not happen next month, it might not happen until sometime next year. Because right now, in the dead of winter, the Marlins aren’t particularly stressed by the enormous debt their franchise has compiled, and they have time to look for the trade that best fits their needs. They have the freedom to ask the Giants for pitcher Tyler Beede and first baseman Chris Shaw and insist they take on all or most of Stanton’s salary. The Marlins can propose the Cardinals surrender their top pitching prospects. They can ask the Red Sox for Rafael Devers, because early in the winter, you can ask for anything.

But none of those talks matter unless Stanton gives the OK. If he turns them down, eventually the Marlins will be boxed in and forced to make their best deal with the team or teams he accepts, if they want to dump most or all of the money in his contract to reduce their debt.

If Stanton needs a blueprint for how this could play out, he can draw upon the events of the 2003-2004 offseason, when Alex Rodriguez steered the Texas Rangers’ efforts to move him under circumstances similar to Stanton’s. Rodriguez was the most coveted slugger in the game, his league’s MVP, but even with Rodriguez playing at a high level, his 10-year, $252 million contract was too onerous for the Rangers -- just as Stanton’s backloaded contract is about to become untenable for the Marlins.

When the Rangers first put Rodriguez on the market, there was a lot of media speculation about where he might land, where he might fit, which team could take on his contract. But in the end, Rodriguez led a push to make a deal happen with the Red Sox. That effort fell apart, and it appeared Rodriguez might start spring training with the Rangers.

The Yankees? They had no interest in Rodriguez at the outset of the winter.

But when Aaron Boone blew out his knee playing a pickup basketball game, the Yankees had a sudden need for a third baseman and Rodriguez made the deal happen. The Rangers got Alfonso Soriano in the trade, and assumed almost 40 percent of the money owed to Rodriguez. Eventually, Rodriguez landed with the Yankees in an imperfect deal for Texas, because that’s the trade the Rangers had to make; with Rodriguez dictating his landing spot with his no-trade clause, the Rangers had no options.

At the outset of this winter, the Dodgers’ interest in Stanton seems lukewarm. They have the prospects to make a deal, and sure, Stanton and his star power would be perfect for L.A., dropped in among Corey Seager, Cody Bellinger and Justin Turner in the lineup. But the Dodgers intend to cut payroll this winter, and besides, they’re not really wild about big, long-term deals.

But if Stanton just says no to the Marlins -- if he wants to go to the Dodgers or some other team -- eventually, Miami will have no choice but to make a deal on the other club’s terms. Maybe the Dodgers help to make the money work by adding Scott Kazmir or others in the trade. Maybe the Marlins eat a healthy chunk of the Stanton contract to ensure a deal.

Stanton is one of the more powerful hitters in baseball, but right now, that on-field strength is superseded by the incredible negotiating leverage he possesses.

This is why Jeter should have met with Stanton in his first day on the job, and might want to give him a front-row seat in whatever conversations are taking place.