CHICAGO -- After a statement series sweep over the division-rival Milwaukee Brewers, the Chicago Cubs have an opportunity to end the first full month of the season in a familiar spot: first place in the National League Central. It's the same place they were the last two years when entering May, and it's also where they finished each of the past two seasons.

Starting to see a trend?

The first month and few days were marked by early weather postponements and inconsistent play. But the finish was strong, thanks to the Cubs' starting staff. Six straight quality starts have vaulted the team within a half-game of first place as the month comes to a close against the Rockies at Wrigley Field (7 p.m. ET, ESPN).

"I truly believe our starting staff will carry us," a prescient Joe Maddon said while things for his team were going bad. "I'm not just saying that. We've done OK without getting their best yet." 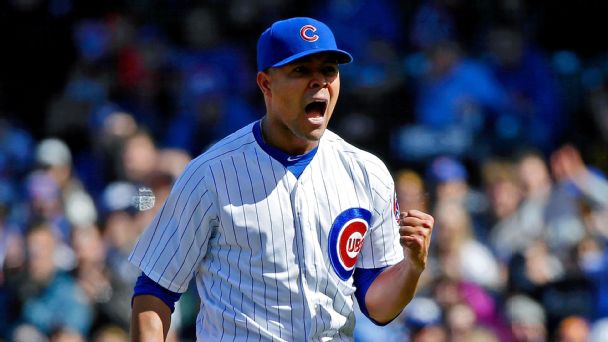 This year's Cubs were built to win the way they did in 2016: with strong starting pitching. Now they're starting to fulfill those expectations. -- Bradford Doolittle

Before this past week, the starting rotation had struggled, leaving the heavy lifting to the offense. After a slew of strikeouts late in March and early April, the Cubs began a professional approach at the plate. The results were astounding, as hitters began using the whole field and striking out less.

According to ESPN Stats & Information, the Cubs have 65 opposite-field hits, good for fourth in the NL. They ranked 19th in baseball in that category last season. And they would have more if not for those rainouts, as the Cubs have played the fewest games in the league (25). Maddon is hoping an April 19 win over the St. Louis Cardinals will end up being the turning point for the offense. They sprayed 14 hits to all parts of the field in an 8-5 victory.

"God, a good approach, good at-bats, weren’t they?" Maddon asked rhetorically after that game. "That is so fun to watch. Keep your launch angles, keep your exit velocity, give me a good at-bat."

Before the offense and starting staff found some success, the Cubs had been held together by their bullpen. Ranked third in the NL going into Monday's game, the pen has been the most consistent part of the team. Brandon Morrow has been lights-out in the ninth inning, while setup man Carl Edwards Jr. and Steve Cishek in the middle innings have done their jobs as well. And lefty Brian Duensing hasn't given up a run.

So the season began with the relief staff carrying the load, then turned to the offense -- which has scored the second-most runs per game (5.28) in the league -- and finished with a rotation spike. The Cubs are now living up to the hype of the winter.

That's where the Cubs find themselves a day before May begins and with an unlikely first-month MVP ...

No one's star has taken a bigger leap than that of the Cubs’ dynamic second baseman. He leads the league with 26 runs batted in and may lead in energy and flair as well. His style already has irked at least one manager and opposing player -- from different teams -- but also makes him arguably the biggest attraction on the Cubs. Watch Baez -- at home or on the road -- when he steps onto the field, as there's a palpable buzz in the stands. Meanwhile, his baseball IQ on the basepaths and instincts on defense are off the charts. Baez is firmly in league MVP conversation after one month.

Baez might be the obvious hero, but other unsung ones emerged as well:

Edwards has taken that step to near-stardom at the back end of the bullpen. His 18 strikeouts to five walks make him a weapon to be used in the eighth or ninth inning and eventually could give him the leg up whenever a dirty inning needs cleaning. The opposition is hitting .146 off Edwards, which is in line with what opponents did last season, but the difference is in his walk percentage, which is down from 14.5 percent to 8.2.

Ian Happ came out of spring training as the hot name in social media after scorching Arizona pitching in March, but it's Almora who has shown the most at the top of the order since the calendar turned to April. A fan favorite, he has already made a half-dozen great catches in center field, putting on a show in spacious Coors Field during one series. He and Baez have formed an odd daily double at the top of the lineup: Neither takes walks, but both consistently have hit their way on base.

A team on the rise just got stopped in its tracks, as the Cubs already have won seven of eight games against the Brewers this season. Three shutouts in four days this past weekend capped an incredible eight-game stretch on the mound against Milwaukee this month. The Brewers scored nine runs total in those eight games. If winning in the division is crucial to claiming the division crown, then the Cubs already are ahead of the game.

In a month in which stars Anthony Rizzo (back tightness) and Kris Bryant (hit by pitch) missed games and Yu Darvish got off to a shaky start, the Cubs have proved they have enough depth to weather any storm. And if the end of April is a signal of what's to come, then May might establish who the dominant team is in the division. Just like that, the Cubs seem to be showing their true colors once again.