Hope you’ve got some time cleared on your schedule. The ninth annual College Hoops Tip-Off Marathon is here with a 24-hour smorgasbord of basketball to devour: 11 men’s games, and women’s games featuring No. 3 Connecticut at No. 12 Florida State and No. 8 Texas at No. 11 Stanford.

YEAR OF THE FRESHMEN 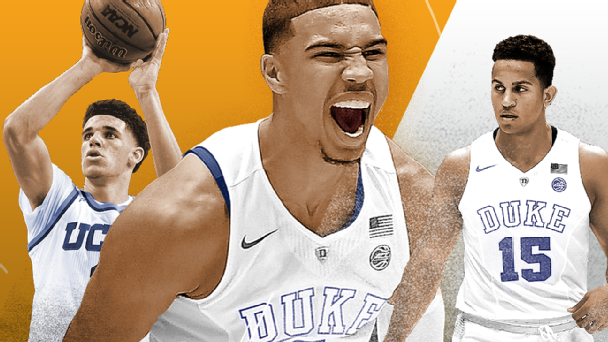 It is the Year of the Freshmen in college basketball. It's time to learn all about them.

• Freshmen orientation: Best class ever?
• Is it really the best ever?
• Full coverage of Year of the Freshmen

When the marathon ends with Oregon at Baylor, the fun is just beginning. The Champions Classic on Tuesday features No. 1 Duke against No. 3 Kansas and No. 2 Kentucky against No. 13 Michigan State.

Keep in mind this is one marathon where everyone can claim victory. Just being able to finish watching every game is worthy of a participation medal.

Here are my picks:

All times are ET

The Great Danes should certainly have Cincinnati’s attention, having won at Penn State 87-81 in the opener. The Bearcats have too many weapons, including forward N.C. State transfer Kyle Washington, who recorded a double-double (16 points, 12 rebounds) in his debut. Cincinnati 75, Albany 59

Ohio State guard Kam Williams started off with a bang, making 5 of 6 3-pointers to tie his career high with 23 points against Navy. Although coach LeVelle Moton’s Eagles have the kind of veteran roster that could pull off an upset, this isn’t the time or the place for that. Ohio State 84, N.C. Central 64

This could end up being the low-key thriller in the marathon. Princeton is favored to win the Ivy League after returning all of its starters from last season. With the graduation of Chase Fischer and Kyle Collingsworth, the Cougars are excited to usher in the era of former high school teammates Eric Mika, Nick Emery and T.J. Haws. BYU 85, Princeton 84 (OT)

The addition of transfers Nigel Williams-Goss and Jordan Mathews brings a new level of athleticism to Gonzaga's backcourt. The Aztecs’ starting guards, Trey Kell and Jeremy Hemsley, combined for 48 of their 69 points in the opener. If the teams played two-on-two, maybe SDSU would win, but Gonzaga has a better supporting cast. Gonzaga 70, San Diego State 61

Former Arizona great Damon Stoudamire makes his home debut as coach of Pacific. But his task isn’t so simple, facing a Green Bay squad that made its first NCAA tournament in 20 years last season. The Tigers got destroyed at UCLA 119-80, but fortunately for them, the Phoenix don’t have the same level of athleticism. Pacific 79, Green Bay 75

Both teams have a loss to SIU-Edwardsville in common. The Rainbows are the O.G.s of the marathon as the only school to participate in all nine events and are playing at home. That has to count for something, right? Hawaii 70, Florida Atlantic 65

Early morning hoops would have been the perfect showcase for Hartford’s leading scorer from last season, Cleveland “Pancake” Thomas, but alas, he decided in August to transfer to Western Kentucky. Niagara has only one senior on its roster, and the toughest thing for a young squad to do is win on the road. Hartford 76, Niagara 70

Manhattan missed the presence of senior guard Rich Williams in its opening loss to Bucknell. The Jaspers are promoting the game as #JavaWithTheJaspers, providing free coffee for fans attending, and will need to #staywoke against Winthrop’s Xavier Cooks, who dropped 21 points in the opener against Ferrum. Manhattan 73, Winthrop 66

In its home opener, Stephen F. Austin begins life after Brad Underwood took the Oklahoma State job. Longwood hasn’t had a winning season since 2009 and was 3-13 on the road last season. It doesn’t look like things will improve against the Lumberjacks. Stephen F. Austin 82, Longwood 66

Avery Johnson’s second season with Alabama will likely be defined by defense. The Tide isn’t about to let the Flyers fly (or their players play) with an up-tempo pace. For Dayton to win, it’s going to have to do it in a game that’s won in halfcourt sets. Alabama 65, Dayton 62

As the Dillon Brooks watch continues, Oregon has to figure out how to play without their injured leader. Tyler Dorsey is a good reminder that Brooks isn’t the only star on the team. According to ESPN Stats & Information, Baylor is just 4-32 all-time against Associated Press top-five-ranked opponents when it is unranked. Oregon 74, Baylor 70

Bonus picks: Though technically not part of the marathon, the Champions Classic games on Tuesday are too good not to weigh in on.

Mike Krzyzewski pointed out after Duke’s game Saturday that the team of right now is not the team they hope to be when injured freshmen Marques Bolden, Harry Giles and Jayson Tatum are healthy. The Blue Devils have a thin margin of error, with essentially only six players logging the majority of minutes. The Jayhawks' depth will wear down Duke. Kansas 77, Duke 70

Miles Bridges put on quite the show with 21 points in the Spartans’ 65-63 loss to Arizona. The problem for Tom Izzo might be finding a second scorer to go along with Bridges, as he was the lone player in double figures. Kentucky won’t have that problem, although their freshmen trio of Bam Adebayo, Malik Monk and DeAaron Fox got off to a shaky start against Canisius. Kentucky 71, Michigan State 62