ENGLEWOOD, Colo. -- Peyton Manning turned 44 at the end of March. It will likely be the first of many celebrations in a year that figures to be notable as far as football goes.

Manning, who retired in the weeks following the Denver Broncos' Super Bowl 50 win, is eligible for the Pro Football Hall of Fame's Class of 2021. With 71,940 yards passing, 539 touchdowns, 14 Pro Bowl selections, two Super Bowl wins and five league MVP awards, the conversation of his candidacy figures to be brief.

You can get a glimpse of Manning's post-NFL career during Friday's Peyton's Places marathon on ESPN2. The episodes air from 7 to 10:30 p.m. ET. 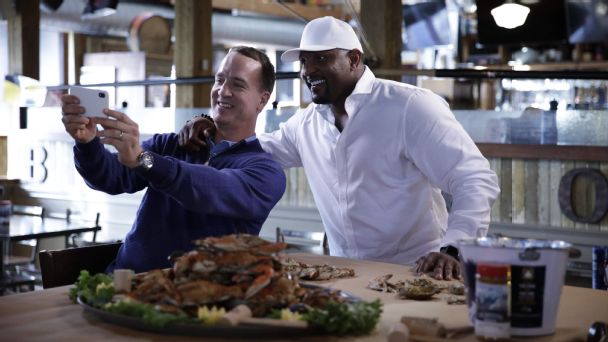 On April 17, ESPN2 presents Manning's show celebrating the history of the NFL (All times are ET)

That series has been a big part of Manning's public life over the past year as he crisscrossed the nation during the NFL's 100th season celebration. Manning has said he doesn't like to "use the r-word," as in retirement, but has instead called his post-football life "the second chapter."

Manning is a familiar sight in and around Denver, where he has a home, attending his son's flag football games, his daughter's softball games and Broncos home games or practices. Manning even brought his father, Archie, to one of the Broncos' practices last season. Manning is also an ubiquitous presence as a pitchman and has filled his calendar with events as part of his foundation's work in four states: Colorado, Indiana, Tennessee and Louisiana.

He was in Canton, Ohio, last summer for the Hall of Fame's enshrinement ceremonies that included former Broncos owner Pat Bowlen and former Broncos cornerback Champ Bailey. He was also named to the Louisiana and Tennessee sports halls of fame within the past year.

He has been rumored, multiple times, to be the next Monday Night Football analyst or an NFL general manager or a team executive or an investor.

"I've been able to do a lot of things," Manning said this past season. "I just have stayed busy with a lot of things I've wanted to do and some new things that popped up too. But I always say I like listening. People have heard me say this, but I think I'm pretty good about letting people know right away if it's something where I'm in or I'm out.

"Again, I don't really, and haven't really, thought of anything as just one job description right now. That's just not how I've gone about it."

Manning has also been where Tom Brady is right now, as a championship-winning, record-holding, Canton-bound quarterback who changed teams late in his career. Manning was coming off his fourth neck surgery and missed the 2011 season when he signed with the Broncos in March 2012 at 36. The event has been recounted plenty this past week in Denver, its eight-year anniversary, even as the Broncos try to get back to the playoffs for the first time since Manning retired.

To celebrate 100 years of pro football, Peyton Manning travels the country to see the people and places that made the NFL the NFL.
Watch on ESPN+ » More »

If Brady's time as a Tampa Bay Buccaneers quarterback is remotely close to Manning's four seasons with the Broncos, it will only enhance Brady's legacy as the GOAT. The Broncos won the AFC West in all four of Manning's seasons, went to two Super Bowls (winning one) and set the league's single-season scoring record in 2013. Manning also set the league's single-season records for passing yards (5,477) and touchdowns (55).

Unlike Brady, who is a regular contributor on a variety of social media platforms, Manning has never been much for social media. That means most people see Manning only on television and at events.

Broncos linebacker Von Miller has joked that if Manning wanted to hire someone to handle his social media presence, "I would do it ... I would get it right."

Manning, who was always the biggest proponent of preparation and planning during his playing career, has often said, "I don't really look ahead" when referring to his post-football life, which from the outside seems pretty fulfilling as he turns 44.

As Miller put it, with a laugh, this past season: "When I grow up I want to be Peyton Manning."