The hottest team in the National League, much to the chagrin of the suddenly vulnerable Cincinnati Reds, is the Washington Nationals. The Nats have won eight of 10 games and 19 of 25, and among the key hitters in the surge to contention have been third baseman Ryan Zimmerman, outfielder Jayson Werth and shortstop Ian Desmond, each owned in 100 percent of ESPN standard leagues. Of course, they're not the only players putting up good numbers, and fantasy owners still playing for something should notice two others batsmen.

Outfielder Denard Span boasts a 26-game hitting streak, one shy of the major league best for this season, held by Colorado Rockies outfielder Michael Cuddyer. Span has his batting average up to .284, and while he didn't score a run or steal a base in Sunday's 11-2 romp over the pitching-poor Philadelphia Phillies, he scored two runs and stole three bases Saturday. Span is hitting .320 since the All-Star break, and while he is on ESPN's most-added list, he remains available in roughly half of ESPN leagues. Span is batting .341 against the Miami Marlins this season, and the Nationals face the Marlins later this week (after facing the Atlanta Braves). 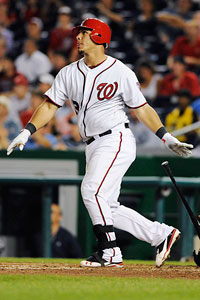 Wilson Ramos ranks fifth among catchers on the Player Rater over the past 30 days.