Colorado Rockies closer Rafael Betancourt probably deserved a better fate this week in Philadelphia, but now it's reasonable to ask if Thursday night was the last time we'll see the Venezuelan right-hander pitch. Betancourt blew the save in Wednesday's game, then again Thursday before succumbing to elbow pain, which could be serious enough to warrant Tommy John surgery and end his career. Betancourt is, after all, 38 years old. It's not official yet, so deep leaguers should wait a bit longer before parting ways, but everyone should see if lefty Rex Brothers is available, for this is a dominant reliever whose opportunity appears to have returned.

Brothers leads all relief pitchers in Wins Above Replacement this season, and when Betancourt was out recently following an appendectomy, the former first-round pick filled in quite ably. He has 11 saves on the season, and while he's probably a bit fortunate to have a 1.51 ERA (his xFIP is 3.53), this is a potential top-10 fantasy closer with strikeout potential who is available in more than 40 percent of ESPN standard leagues. Act now, and take note in dynasty formats as well, because Brothers should be the guy for years to come. 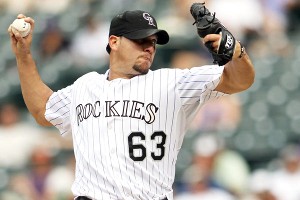 Before blown saves Wednesday and Thursday, Rafael Betancourt had 16 saves in 17 chances.