INDIANAPOLIS -- It wasn’t a matter of if but when Frank Reich would make the move into coaching.

Reich first wanted to focus on spending time with his family, get involved in the seminary and become a pastor after retiring from the NFL in 1998 after a 14-year career as a quarterback.

Reich’s wife, Linda, knew “ministry was what he was doing, but football has always been ingrained in him.” Reich’s younger brother, Joe, knew Reich wanted to coach when Frank became a volunteer assistant at Wingate (N.C.) University, where Joe was the head coach. Reich knew the opportunity would be there after Bill Polian, who drafted Reich in Buffalo, told him as a rookie in 1985 that he wanted him to coach on his team once his playing career was finished. 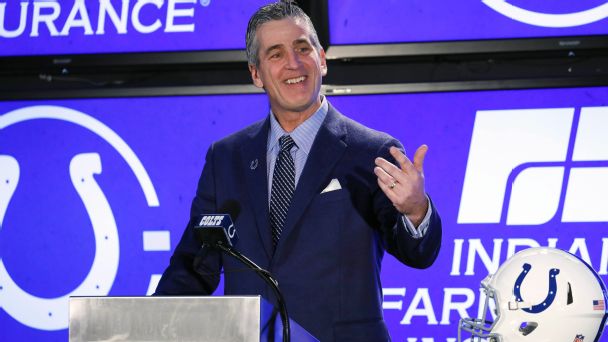 “He took his time off because he’s such a family guy and wanted to be a father that was around his kids as much as he could since he was done playing,” Joe Reich said. “He also wanted to do ministry and the seminary. Those were all things that allowed him to fulfill his leadership requirements, so to speak.

“I think he was fulfilling that itch, but I think the competitiveness in him was saying, ‘OK, let’s get into coaching.’ There’s not too many seminaries competing against one another. It’s not like one seminary is going out and playing another one. I think when he had the opportunity to step back from the ministry for a few seconds, he made that call.”

Remembering what Polian had told him 21 years earlier, Reich reached out to his former boss, who at the time was general manager of the Indianapolis Colts. He told Polian he would “scrub the toilets” if he had to. Polian went to then-coach Tony Dungy and got his thoughts on hiring Reich as a coaching intern during camp.

“I always knew Frank was very smart, dedicated and committed to the game,” Dungy said. “It was an easy decision for me. The direction he got into coaching was probably unusual because of the amount of time he took off after playing. But you can say he did it the right way. His decision to put his family first and spend time with them shows you the type of character he has and where his values are.”

Almost 12 years, five different job titles and four NFL teams later, Reich has circled back to where he started, replacing Chuck Pagano as head coach of the Colts.

“This is a great football city, and I’m happy to be home to my coaching roots,” Reich said. “This is where I got my start, my first coaching job, here with Tony Dungy as an intern and then eventually as a quality-control coach and then as the quarterback coach to get my start. What better way to get started, and there could not be a better way to finish it right here in this great city.”

Reich’s playing field after his NFL career was centered on going to seminary and eventually becoming the president of the Reformed Theological Seminary and pastor of Covenant Presbyterian Church in Charlotte, North Carolina.

“I went to seminary, got very involved in ministry, did a lot of things in the community, traveled around the country. But I always knew I wanted to coach,” Reich said. “I believed that was in the future, and whenever that time was, seventh year or something like that, I just knew I had been away long enough that I better not be away much longer because I don’t want the quote-unquote 'game to pass you by.'"

The itch to coach started around 2005. Reich asked Joe whether he could be a volunteer assistant coach one day a week and sit in the press box every game. Joe and the rest of his staff at Wingate thought Reich was playing a trick on them.

They wondered: Why would a former NFL quarterback want to help coach at an NCAA Division II program?

Reich’s commitment to coaching was quickly evident when he went down to the field after a game against Davidson College early in the season with a pad full of detailed notes. Reich told the coaching staff they needed to have their 6-foot-5 quarterback start bending his knees when handing the ball off to their 5-8 running back to lessen the likelihood of a fumble on the exchange. Reich met with the quarterbacks at the start of the week to go over the previous game and discuss what they should focus on in the days leading up to their next game.

“To this day, I’ve never known anybody that can see the field as good as he does,” Joe said. “We’d joke as a staff because Frank would come in and tell us what he saw. We’d look at one another wondering how he saw that. At that point, I knew he was going to be really good as a coach. You could just see how natural everything came to him. He had just great vision of the field, great vision of what was going on.”

Next came the talk with Linda. This wasn’t going to be strictly Reich's decision. He had to take his wife and three daughters into consideration, too.

“We’re a team,” Linda Reich said. “We talk about everything. We pray about everything. We knew it was an interim time for him to really invest time with our children and spend time with our children. I knew deep down that he wanted to coach. He loves the game. He’s never had his hand out of it. He was calling people, talking to people, going to games. He was never out of it. He was always involved. Ministry was what he was doing, but football has always been ingrained in him.”

'He has a way with people'

Reich spent six seasons with the Colts, going from coaching intern to offensive assistant to quarterbacks coach to receivers coach. Stops in Arizona (2012, receivers coach), San Diego (2013, quarterbacks coach) followed before he got his first shot as an offensive coordinator with the Chargers in 2014-2015. He spent the past two seasons in the same position for the Philadelphia Eagles, capping off his run with a win in Super Bowl LII.

Dungy knew it was only a matter of time before the opportunity to be a head coach would come for Reich. Dungy felt even more confident Reich's time would come soon after spending time around the Eagles during the bye week before going to Minneapolis for the Super Bowl.

“Putting together a scheme is a big part of coaching, but so much of it is also leadership,” Dungy said. “Frank always had leadership as a quarterback in Buffalo. I saw it when he was working with the young players when he was on staff with us in Indy. He has a way with people. It was very clear the week after the NFC Championship Game that he had the respect of the players and he did an incredible job putting together the game plan. The Colts are in great hands with Frank."

Once Patriots offensive coordinator Josh McDaniels changed the landscape of things by spurning the Colts at the last minute, Polian, Dungy and Peyton Manning reached out to endorse Reich for the job. Colts general manager Chris Ballard left the interview with Reich second-guessing himself on why he didn’t have him on his initial top-five list of candidates. He wondered why Reich wasn’t a head coach already. Reich interviewed for head-coaching jobs with the Bills and New York Jets in 2015.

“Frank’s not one of those people that wants all the publicity, all the notoriety,” said former quarterback Jim Kelly, whom Reich backed up in Buffalo. “He’s a laid-back guy and has no interest in being in the spotlight. Finally getting a chance is the best way to describe Frank's situation. He’s a character guy who is very smart and a likable person who I think is going to fit pretty good there in Indianapolis.”

Retired NFL player. President of a seminary and pastor of a church. Volunteer coach for an NCAA Division II program. NFL coaching intern.

The path to where he is today is unusual, but Reich would do the same thing all over again.

“I wouldn’t trade any day of that experience -- the time with the family, the time in seminary has helped shape me to be the coach I am today,” he said.