MINNEAPOLIS -- Kirk Cousins must enjoy the adrenaline rush that comes with what he has gotten himself into.

It's the kind of feeling experienced by Philippe Petit, the man who scaled a tight rope between the two World Trade Centers in 1974. Cousins, too, thrives off an experiment so mighty, only few would dare attempt to try. 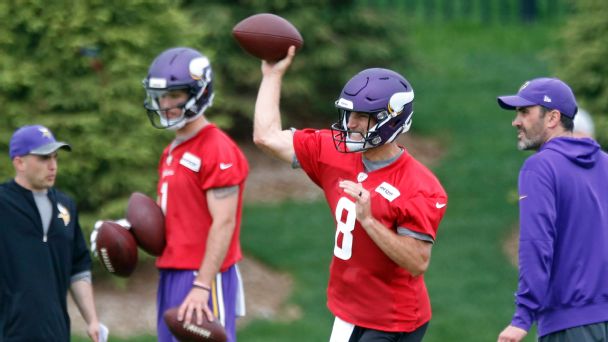 But this challenge? It's almost unheard of. Joining a team coming off a 13-3 season that views the player tasked to fill the quarterback position as the missing link between this franchise and a Vince Lombardi Trophy derives an unfathomable amount of pressure.

It's an all-or-nothing pursuit. What Cousins does in Minnesota will either set him up for his next earth-shattering contract or be deemed among the biggest mistakes in NFL history. There is no in between.

So let's cut to the chase and ask the question we're all wondering: Why would he do this to himself?!

"Well, I think you want to go somewhere with expectations, right?" Cousins said on ESPN's NFL Countdown. "I mean, we're here to win and I was looking around and ultimately people kept me asking me what is going to drive your decision and it was all about winning. You know, where can we win football games? And Minnesota, I feel, was one of the, if not the best place to go to do that."

The past five months since putting pen to paper on a three-year, $84 million fully-guaranteed contract in March have been the prologue in the book on his career with the Vikings. Chapter one begins on Sunday.

Cousins starts the next phase of his career against the team that at one time looked like his subsequent destination after six seasons in Washington. A team whose head coach felt like there was no other answer for the San Francisco 49ers than his former quarterback.

Kyle Shanahan lamented that it took three weeks to get over the fact that Cousins was never coming to the 49ers once they traded for and signed Jimmy Garappolo on Halloween. Perhaps no one understands just how high the stakes are for Cousins than the man who was part of getting him to this place.

"Playing quarterback in this league isn't just about how talented you are and how good you are, it's how you can respond to all this pressure that really not many people can relate to except probably an NFL quarterback can," Shanahan said on The Adam Schefter Podcast in April.

Eventually, all the questions repeatedly posed to Cousins since Day 1 will start to find their answers. From Week 1 onward, he'll be judged against what he has done in the past and whether he can replicate his success (and then some) with his new team. Whether he was worth the mega bucks Minnesota paid to get him will be determined not only by what Cousins does on the field, but by any amount of success achieved elsewhere by the three quarterbacks he replaced.

The pressure that amounts from being responsible with leading the Vikings to the promise land is unavoidable. Perhaps the only silver lining in this unyielding situation he put himself in is the way he views the big picture as no different than at any other point in his career.

"I don't go out on third down and think about the pressure," Cousins said. "I'm thinking about coverage, blitzes, setting the protection the right way, making my reads, my footwork. So it just doesn't really end up affecting the actual operation of the job. Is there pressure to play in this league? Yes, there always has been. I felt a great deal of pressure as a rookie, just fighting to make the team and to wonder if I was even going to have a career here as a professional.

"So there's pressure for every guy that's out there; it's a very competitive league -- small margin for error. And you've got to recognize the pressure for what it is and then put it on the shelf and go to work and not let it get in your way, and it really -- there's enough for me to think about and enough for me to be doing, that I don't really need to be thinking about all that goes with that on the outside."

Cousins has repeatedly deferred to the nature of the team game and not being able to win it all himself. That's more than just a way to insulate himself from the mountain of expectations he willingly accepted. It buys him time on this not-so-overnight journey. Whether Minnesota wins a Super Bowl doesn't have to happen in the first year of Cousins' contract, but the pressure to do so will only mount over time.

The expectations for the Vikings' season start and end with Kirk Cousins. A team whose championship prospects rest on the shoulders of the man paid to see them through will have its story told through the questions that will begin to find their answers on Sunday.