NEW ORLEANS -- Anthony Davis took his seat at the dais Sunday night, his All-Star Game MVP trophy by his side, ready to put an end to a banner weekend for professional basketball in New Orleans.

Davis’ record-breaking 52-point performance, in which his West teammates fed him for a record 39 shot attempts, seemed like the perfect grand finale before returning to the sober reality of scratching and clawing for a playoff spot: The Pelicans (23-34) trail eighth-place Denver by 2½ games.

But everything changed with one bold Pelicans move: New Orleans traded for DeMarcus Cousins, a monumental decision that for years to come will define the only franchise Davis has known.

The Pelicans superstar, who denied having previous knowledge of trade talks toward the end of his postgame news conference, greeted the news with a smile and big thumbs-up before leading a large group of family and friends out of the Smoothie King Center.

Just like that, the Pelicans had landed -- at a low price -- one of the most gifted big men in the world to put next to their wunderkind big man who, two weeks shy of turning 24, is in the midst of his most productive season.

“Maybe the world is flat,” a league source said via text upon hearing the final trade details.

When the intoxication of the moment wears off, there are indeed future-defining questions raised by Cousins’ sudden arrival, chief among them how to fit two top-10 usage rates into the same frontcourt. Both former Kentucky big men have been reluctant to be labeled a center, and while Davis’ game is built for the speed of coach Alvin Gentry’s fast-paced system, the burly Cousins had settled into a spot on one of the league’s most methodical teams after a difficult season in George Karl’s fun house.

Fitting Cousins’ edgy disposition into a relatively tame locker room also figures to be an interesting chemistry experiment for an organization that has quietly longed for a more aggressive personality to counterbalance the laid-back Davis, who has made concerted efforts to emerge as a vocal leader in his fifth NBA season. Cousins, the thinking goes, can just as easily become an accelerant for Davis much like Draymond Green -- a Gentry favorite with whom he still keeps in close contact -- is for Stephen Curry. 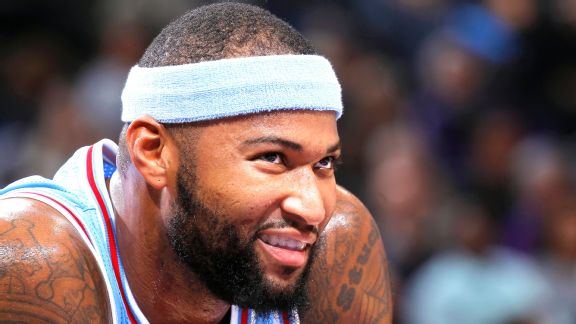 DeMarcus Cousins is headed to New Orleans in a stunning deal completed after the All-Star Game.

There’s still the issue of keeping Cousins, who has one year left on his contract. There are the issues brought about by doing so, including the willingness of Jrue Holiday, an unrestricted free agent this summer, to re-sign, and the cap sheets of a franchise that has so far had to operate without dipping into the luxury tax. And there’s the potential for past issues to continue to haunt them, including the $26 million being paid to Omer Asik, Solomon Hill and Alexis Ajinca this season alone.

But those are what the kids would call “rich-people problems” -- ones Pelicans brass will be happy to sort out in the coming months.

Gallows humor was thick in the halls of the Smoothie King Center at the beginning of the season, when the Pelicans lost eight straight without the help of Holiday, who missed the first 12 games because of his wife's health issues.

In the wake of Davis’ triumphant strut, shock and wonder surged through that same arena Sunday night.

New Orleans is no longer just a party host or the home of Anthony Davis.

For the first time since its thrilling run to the postseason two seasons ago, its basketball team matters in the NBA landscape once again.