1. Silence speaks volumes: When Jets general manager Joe Douglas was asked to give his opinion on why Le'Veon Bell didn't perform up to expectations this season, he declined, saying, "I really don't think that's for me to comment on." He praised Bell's practice habits and his "great preseason," saying the goal for next season is to get more production out of the running back. And that was about it.

Monday through Friday, host Mina Kimes brings you an inside look at the most interesting stories at ESPN, as told by the top reporters and insiders on the planet. Listen

Was Douglas hesitant to criticize Bell? Was he protecting his offensive line? Or was he covering for coach Adam Gase, whose deployment of Bell raised questions?

A deep dive into Bell's historically poor season reveals that everyone needs to take some blame. 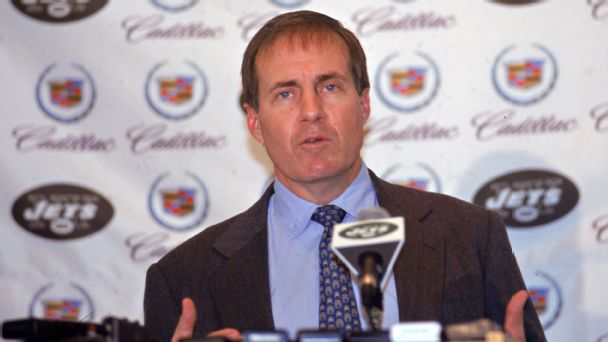 The coach's departure from the New York franchise is still shrouded in mystery, but here's what we do know from that 48-hour period when he left for the Patriots. More

Some will point to Bell's patient running style, but that doesn't fly. He got to the line of scrimmage faster than he did in Pittsburgh -- 2.84 seconds to 3.09, which shows he tried to adjust because of the circumstances.

Still, it wasn't good enough. He averaged 3.22 yards per carry, the worst single-season mark in Jets history. If he returns, it's on everybody to make him more productive.

2. First look at NFL draft: The Jets' top priority is the offensive line, but they're in a tricky spot with the No. 11 pick. Tackle Andrew Thomas (Georgia), the consensus top lineman, probably will be off the board. The next best probable pick is tackle Tristan Wirfs (Iowa), who still hasn't declared. Evaluators have a wide range of opinions on Wirfs. In fact, Scouts Inc. doesn't even rank Wirfs among its top 32 prospects.

In other words, the Jets might not be able to address the line in the first round. Possibilities at No. 11 are cornerbacks C.J. Henderson (Florida) and Paulson Adebo (Stanford) and wide receiver CeeDee Lamb (Oklahoma). Wide receiver Jerry Jeudy (Alabama) would be terrific, but there's zero chance of him falling to No. 11.

3. Trader Joe: Best move by Douglas in his first 212 days on the job? That's an easy one -- the Leonard Williams trade. He dealt the underperforming defensive lineman to the New York Giants for a 2020 third-round pick, which turned out to be the fourth pick in the round (No. 68 overall). Oh, yes, the Jets also received a 2021 fifth-rounder, which can improve to a fourth-rounder if Williams re-signs with the Giants before free agency. It's comical listening to Giants GM Dave Gettleman try to rationalize the trade from his perspective. No one gives up that much for a run-stuffer in the final year of his contract. It was a terrific deal for the Jets.

4. For the analytics crowd: Evaluating line play is highly subjective, but the growth of analytics has provided metrics by which we can measure pass-blocking and pass-rushing efficiency, courtesy of NFL Next Gen Stats. You might be surprised to learn the Jets have high-ranking players in both categories.

Kelvin Beachum, who had a sneaky-good season, finished third among NFL tackles in pass-block win rate (94.2 percent). Alex Lewis (94.3) finished eighth among guards. Good timing for them, as both players will be free agents. On the flip side, Chuma Edoga (80.0) placed 66th among 69 qualifying tackles. It was a shaky first season for the 2019 third-round pick.

The player with the top pass-rush win rate on the Jets was -- are you ready for this? -- Tarell Basham (20.7), who finished 17th. Next best was Jordan Jenkins (19.7), who placed 23rd. You're probably wondering about Quinnen Williams, right? The highly touted rookie, who had a disappointing season in terms of overall production, was a surprising 10th among 34 qualifying defensive tackles at 10.9%.

5. It hurts so bad: The Jets already have begun to examine the injury problem that plagued them in 2019. Gase and Douglas have discussed the issue with the trainers, the strength-and-conditioning staff and experts outside the organization, hoping to determine if there are ways to reduce the number of certain injuries. They're studying the practice schedule, the training-camp regimen and the offseason program.

"We're combing through everything because we can't have this happen again," Gase said.

They used an absurd 11 different starters on the offensive line. The Jets experienced the other extreme from 2008 to 2010, when their starting lineup was intact for 45 straight games. It's no wonder they had one of the league's best lines.

6. Get Bill: One of the reasons why the offensive line was so good during that period -- other than continuity -- was Bill Callahan, who coached the unit from 2008 to 2011. Callahan is now a free agent, as he wasn't retained by the Washington Redskins' new regime. He's one of the best there ever was. He wouldn't come cheaply, but that's a move Gase should explore. The selling point is that he would have the opportunity to mold a new line, with heavy turnover expected.

7. Backup plan: If the Jets are smart, they will make more than a cursory investment in a No. 2 quarterback. They went 0-6 with backups over the past two seasons, as Luke Falk, Trevor Siemian and Josh McCown failed to win a single game in place of Sam Darnold. Gase's track record can't be ignored either -- 10-17 with backups, including three seasons with the Miami Dolphins.

NFL PrimeTime continues this postseason with extended highlights and analysis following the conclusion of each day's playoff games. Watch on ESPN+

Which is why the Jets can't leave themselves vulnerable at the all-important position.

8. Money matters: The Jets have just under $60 million in salary-cap space for 2020, according to overthecap.com. That number will grow to about $80 million once they get done with veteran cuts -- cornerback Trumaine Johnson ($3 million savings), guard Brian Winters ($7.3 million) and linebacker Avery Williamson ($6.5 million). Actually, the Jets were trying to shop Williamson in the preseason, when he blew out his knee. Wide receiver Quincy Enunwa ($2.4 million) also is vulnerable.

9. No comps: Douglas grew up in the Philadelphia Eagles and Baltimore Ravens organizations, both of which use compensatory picks as part of their free-agent strategy, but he downplayed that as an option for the Jets.

10. The last word: "The plan is to create the best culture in sports. What do I mean by that? I think the best culture [is] a self-sustaining entity where professionalism and leadership are transferred from one generation of players to the next. You see that in every great team. Every great team has that culture. That's what we're going to try to create here." -- Douglas.