THOUSAND OAKS, Calif. -- In the weeks leading up to the NFL trade deadline, Los Angeles Rams coach Sean McVay said not to expect any big, splashy moves like they've made in the past.

However, McVay also provided a caveat, stating, "I would never say never, as you know."

Given general manager Les Snead's penchant for completing blockbuster deals since the Rams returned to Los Angeles in 2016, we should have known.

On Monday, the Rams acquired eight-time Pro Bowl outside linebacker Von Miller from the Denver Broncos in exchange for second- and third-round picks in the 2022 draft. The Broncos will pay $9 million of the $9.7 million Miller is owed for the remainder of the season, after which the 32-year-old pass-rusher will become an unrestricted free agent.

"If you had told me ... a couple weeks ago if I thought there was a chance of acquiring Von Miller, I would've said, 'Are you kidding me? Hell no.' And then when it becomes a reality, you say, 'Well, let's look into it,'" McVay said Monday after the trade. "Everything we do is what we think is in the best interest of this football team, and there's still a long-term vision in mind as well." 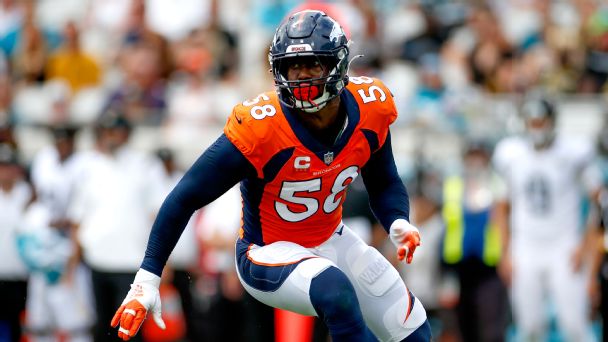 Trading for former All-Pro pass-rusher Von Miller is the latest big move for a star the Rams have made since moving to Southern California in 2016.

March 14, 2018: The Rams trade their 2018 second- and fourth-round picks to the Kansas City Chiefs for cornerback Marcus Peters and a 2018 sixth-round pick.

July 24, 2018: The Rams agree to a four-year, $60 million extension with running back Todd Gurley, with $45 million guaranteed.

Oct. 15, 2019: The Rams send their 2020 and 2021 first-round picks, along with a 2021 fourth-rounder, to the Jacksonville Jaguars for cornerback Jalen Ramsey and trade Peters to the Baltimore Ravens for a 2020 fifth-rounder and linebacker Kenny Young.

Nov. 1, 2021: The Rams trade their second and third-round picks in the 2022 draft to the Denver Broncos for OLB Von Miller. The Broncos agree to pay $9 million of the $9.7 million owed to Miller for the rest of the 2021 season.

It's a method that first coupled the Rams with the slogan "Super Bowl or Bust" in 2018. But now, three seasons later, the practice is perhaps better known as their standard way of doing business. And so far, short of winning that evasive Lombardi Trophy, it has worked.

Since McVay's arrival, the Rams have made three playoff appearances in four seasons, winning two division titles and an NFC championship. As the midway point of this season approaches, the Rams are 7-1, tied for first in the NFC West and for the best record in the league and are pot-committed to getting to and winning the Super Bowl in owner Stan Kroenke's $5 billion stadium.

Their recent run of success is a streak few could have -- or did -- predict when the Rams started trading away future draft capital for stars who would eventually require big paydays.

In 2016, Snead made a historic move up the draft board from No. 15 to select quarterback Jared Goff first overall. In 2018, he sent away a second- and fourth-round pick for cornerback Marcus Peters, traded a first-round selection to the New England Patriots for receiver Brandin Cooks and acquired outside linebacker Dante Fowler Jr. from the Jacksonville Jaguars at the trade deadline for third- and fifth-round picks.

"[People] talk about 'We don't value picks.' That's not true at all," McVay said. "We do value picks, but there is a formula to a lot of the things that we're doing behind the scenes. That there's a vision in place. We feel like it fits for us and it might not be for everybody."

Snead has long said, starting with the addition of Cooks in 2018, that he would rather acquire known commodities with picks than gamble in the draft selecting players who are unknown and unproven.

For four seasons, it has produced winning results.

The only question now is whether it can produce a Super Bowl title.