INDIANAPOLIS -- Indianapolis Colts general manager Chris Ballard craves stability at backup quarterback precisely because of the situation the team finds itself in now. 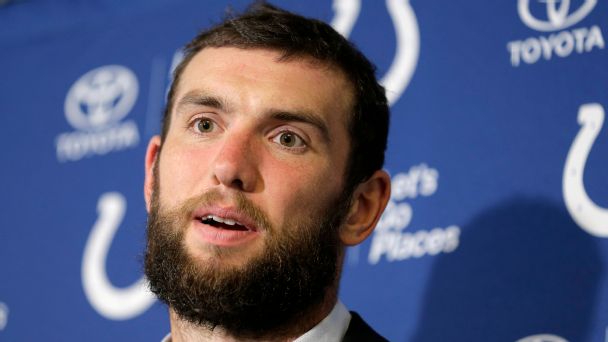 It’s far from an ideal situation two weeks before the regular season begins, but Ballard and the rest of the Colts organization are about to see if Brissett, 26, is truly a top-20 quarterback, as coach Frank Reich said he believes.

Still, without Luck, the Colts go from a favorite in the AFC South to a team that might have a difficult time making the playoffs. Oddsmakers at Caesars Palace now have the Colts with 30-1 odds to win the Super Bowl. Before the news of Luck's decision broke Saturday night, it was 15-1.

When Ballard was hired as general manager after the 2016 season, he praised Luck’s skills but made sure to point out that one player does not make a football team. Ballard wanted to build a complete team so the weight of the franchise wouldn’t be placed on Luck's right shoulder. Ballard has made progress in doing so.

Luck would have had the best set of players surrounding him in his seven seasons, and now, Brissett does. It's a group the Colts thought was ready to take another step after reaching the divisional round of the AFC playoffs last season. The Colts return a productive starting offensive line and added receiver Devin Funchess as they enter the second year in Reich’s offensive system.

It's likely the best chance Brissett will have to make himself an NFL franchise quarterback.

“Diligent, sharp, loves football,” Luck said about Brissett. “I hope I can continue to support him in different ways, so thankful for our friendship. On a personal note ... coming back into the building, early last year, I was very jealous and resentful of this fun, happy dude that was in my spot as a quarterback on this team. I obviously did not have any confidence in myself, either.

"I obviously could not have been more wrong in so many ways. A lifelong friend, he means so, so much to me. He’s a big part of me, and a big part of me having one of the most rewarding years of my life last year. Cannot wait to support him and see him lead this team. Excited for the future of the Colts, in large part because of Jacoby."

Brissett, drafted in the third round in 2016, started two games as a rookie with the New England Patriots, who traded him to the Colts on Sept. 2, 2017, when Luck was struggling because of a shoulder injury. Brissett had two weeks to learn the playbook before taking over as the starter for the final 15 games of the 2017 season, Chuck Pagano's last as coach. The Colts went 4-11 in those games and he is 5-12 as a starter overall. Brissett has thrown for 3,500 yards, 13 touchdowns and seven interceptions in his career.

Unlike the last time he took over, Brissett has been working with the Colts' starting unit in practice since the spring, when the team announced Luck was dealing with a calf strain and then a high-ankle injury that continued to cause him pain.

Brissett will have an early challenge because his first two starts will be on the road against the Los Angeles Chargers and Tennessee Titans, AFC teams with reasonable playoff aspirations.