A roundup of the past week's notable boxing results from around the world:

Rafael's remarks: Golovkin found himself in a competitive fight for the first time in his career, but he pulled out a victory on an electric night at Madison Square Garden, as the 19,939 in attendance and those watching on HBO PPV got a helluva show (which HBO will replay at 10 p.m. ET/PT on Saturday).

Golovkin retained his title for the 18th time, but his legendary, 23-fight knockout streak bit the dust as Jacobs showed the kind of chin few thought he had, even though he did get knocked down in the fourth round on a right hand. A huge underdog, Jacobs lost his own 12-fight knockout streak but fought a very good fight that perhaps could have gone either way. He proved he's an elite fighter as Golovkin was forced to go the distance for the first time since an eight-rounder in 2008.

Golovkin said he was open to a rematch, but a unification fight with Billy Joe Saunders and the long-awaited showdown with Canelo Alvarez are the priority for the rest of this year. 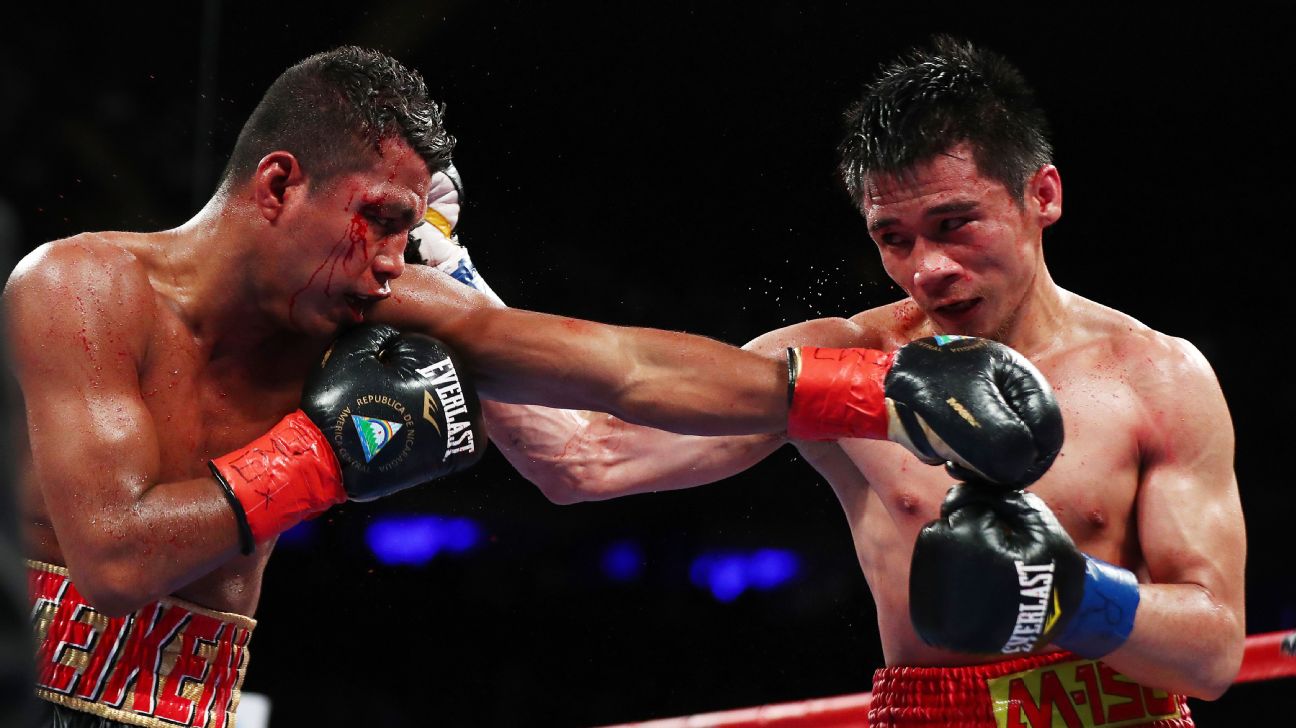 Rafael's remarks: Fight of the year alert! In the kind of intense, bloody, grinding slugfest that takes years off a guy's career, Sor Rungvisai pulled a massive upset to take the title from Gonzalez, destroy his perfect record and likely knock him from his No. 1 pound-for-pound perch. Although many thought Gonzalez deserved the decision, one thing was obvious: There has been slippage in his game. He can no longer be viewed as No. 1 P4P.

Nonetheless, both of these warriors showed huge hearts and great chins in a fantastic fight. Gonzalez, the four-division world champion from Nicaragua, survived a first-round knockdown from a right hand to the body as well as several head-butts from Thailand's Sor Rungvisai, who regained the belt he once held.

In the end, Sor Rungvisai got the undeserved decision in a fight in which Gonzalez appeared to be the much heavier puncher who did more damage with his fists rather than his head. Gonzalez landed more punches in 10 of the 12 rounds and also set a CompuBox junior bantamweight record with his 372 landed power shots. This was a great fight but a bad decision.

Rafael's remarks: Former junior bantamweight world titleholder Cuadras came into the fight with Mexico City rival Carmona, a two-time loser in 115-pound world title fights, with one purpose: to win and retain his mandatory position in order to set up a rematch later in the year with Gonzalez, who narrowly outpointed him in a September barnburner to take the title.

But while Cuadras did his part, outboxing the slower Carmona in a deathly boring fight, Gonzalez got licked in the card's co-feature, meaning Cuadras' lucrative rematch is history. Now he's looking at a rematch with Sor Rungvisai, whom he took the belt from in 2014. Carmona lost his second fight in a row.

Rafael's remarks: Martin is an athletic, well-conditioned prospect with quick hands and an excellent amateur career as his foundation. Now he's climbing the ranks as a pro and received his first major exposure in the opening fight of HBO PPV telecast as he stepped a bit in competition against the smaller Cruz and did what he was expected to do: look good.

Rafael's remarks: The last time Lee, a former middleweight world titleholder, fought at Madison Square Garden was in June 2014 on the Miguel Cotto-Sergio Martinez undercard and he authored a dramatic comeback in a crushing fifth-round knockout of John Jackson. Lee returned to the Garden for this fight, one that was the opposite of the bout with Jackson in that it contained zero drama or action.

Instead, Lee, a 32-year-old southpaw from Ireland, seemed to go through the motions in a one-sided boxing lesson against Leatherwood, 28, of Birmingham, Alabama, in a snoozer. Lee was trying to shake off the rust of a 15-month layoff following a decision loss that cost him world title belt against Billy Joe Saunders. But having won, Lee surely will get a bigger fight.

Rafael's remarks: The 5,102 mostly Irish fans who packed the sold-out Theater at Madison Square Garden on St. Patrick's Day did not come to see a competitive fight so much as they came to see the birth of a possible future star in Conlan, the 25-year-old Irish amateur star and 2016 Olympian. They got what they came for in as festive and raucous an atmosphere as possible in such a small arena. In a sea of green and to the backdrop of traditional Irish music, Conlan walked to the ring dressed like a leprechaun and with good pal and UFC superstar Conor McGregor in his entourage.

Then came the actual fight against designated cannon fodder Ibarra, 25, of Denver, who showed some heart and resilience but never stood a chance. Conlan, clearly a crowd pleaser, was a bit wild and nervous but pummeled Ibarra with McGregor shouting instructions and pacing at ringside. As Conlan continued to batter Ibarra in the third round with body shots and powerful left hooks, referee Benjy Esteves Jr. had no choice but to stop the pounding 59 seconds into the round. Top Rank and Madison Square Garden officials have the building on hold for the next five years for future Conlan events/parties.

Rafael's remarks: Saucedo could have big thing coming in his future. He has moved down to junior welterweight and is now working with trainer Abel Sanchez, who is putting some polish on Saucedo's game. Promoter Bob Arum of Top Rank said he is aiming to get Saucedo a significant fight, perhaps by as soon as the end of the year.

Saucedo did his part by destroying Garcia, a journeyman from Michigan who never stood a chance. Saucedo dropped him with a left hand in the one-sided first round and battered him in the second round. When he badly rocked Garcia, referee Steve Smoger intervened at 2 minutes, 22 seconds.

Rafael's remarks: Conceicao became a star in his native Brazil by becoming his country's first Olympic boxing gold medalist at the 2016 Rio de Janeiro Games. He signed with Top Rank and is fighting in the United States, this time blowing out Hollis, 19, of Cincinnati. Conceicao knocked Hollis down late in the first round with a right hand and then hammered him in the second round until referee Shada Murdaugh stopped it 36 seconds into the round.

Also on the card, Davie, Florida, lightweight prospect Teofimo Lopez Jr. (3-0, 3 KOs), a 19-year-old 2016 Olympian for his parents' home nation of Honduras, routed Daniel Bastien, 20, of Mexico, knocking him down for the count with a body 39 seconds into the second round.

Rafael's remarks: Mansour, a 44-year-old southpaw from Delaware who did not fight from 2001 to 2010 because he was in prison, went to the hometown of Kauffman, 31, and pulled out the majority decision win in a rock 'em, sock 'em fight.

Many expected this one to be an exciting fight and these big bangers did not disappoint in the Premier Boxing Champions main event. Kauffman buckled Mansour with a hard right hand in the second round but they fought on event terms for most of the rough fight. With the fight seemingly up for grabs, they let it all hang out in the toe-to-toe 12th round as they pounded on each other.

In the end, Mansour did enough to deserve the close call (after which he called for a shot at world titleholder Deontay Wilder) and Kauffman complained that he was robbed.

Also on the card, faded former welterweight titlist Kermit Cintron (39-5-3, 30 KOs), 37, of Reading and David Grayton (15-1-1, 11 KOs), 29, of Washington, D.C., fought to a fifth-round technical draw. Two judges scored it 47-47 and one had Cintron ahead 49-46. Grayton dropped Cintron in the fifth round with a left hand but later in the round caught him with an accidental head butt that opened a bad cut over Cintron's right eye. He was deemed unable to continue.