The point spread was invented in the early 1940s by math teacher-turned-bookmaker Charles McNeil. It is the great equalizer of the NFL.

In fact, over the last 15 regular seasons, NFL favorites have gone 1,859-1,860 against the spread, with 111 pushes, according to odds database BetLabsSports.com.

Also during that time frame, 1,890 games have gone over the total and 1,886 have stayed under the total, with 64 games landing squarely on the over/under.

What we're trying to say is that it's very difficult to bet on the NFL. Good luck taking on the oddsmakers who have produced the above results.

As we enter the first NFL season with expanded legalized sports betting in the U.S., here are some numbers and notes to know as you make your bets:

Where the money is going

• More bets have been placed on the Los Angeles Rams to win the Super Bowl than any other team at the Westgate SuperBook. The Green Bay Packers have attracted the second-most Super Bowl bets, followed by the Minnesota Vikings and San Francisco 49ers.

• More money has been bet on the Packers to win the Super Bowl than has been bet on any other team at the SuperBook. The Rams have attracted the second-most money, followed by the Vikings and Philadelphia Eagles.

• Station Casinos' largest Super Bowl liability is on the Cleveland Browns. A Browns Super Bowl victory would be five times worse than any other team for Stations' sportsbook.

• At the new FanDuel sportsbook located at the Meadowlands racetrack, across the parking lot from MetLife Stadium, more bets have been placed on the New York Giants to win the Super Bowl than any other team.

The Buffalo Bills have attracted the fewest bets of any team to win the Super Bowl at the Meadowlands sportsbook.

• "Train wreck": That's how one Las Vegas oddsmaker described the Bills' season. In fact, the SuperBook intentionally dropped the Bills' win total down to 5.5, the lowest number in town, to encourage bets on the over. "We're daring people to bet over on the Bills," said Ed Salmons, head football oddsmaker at the SuperBook.

• The Tampa Bay Buccaneers have attracted the fewest bets and the least amount of money to win the Super Bowl at DraftKings.

Buccaneers at Saints (-9.5, 49.5): Including spread bets and parlays, there are five times more bets on the Saints than the Bucs at Caesars sportsbooks in Nevada, the most lopsided ticket count of any Week 1 game.

• 9: The number of teams that have better odds to win the Super Bowl than the defending champion Philadelphia Eagles at the Westgate SuperBook in Las Vegas. The Eagles are 14-1. The Patriots are the favorites at 6-1.

• $240,000: The amount one bettor placed on the Minnesota Vikings at -200 to make the postseason at the SuperBook.

• 137: The number of games that stayed under the total during the regular season last year, the most in at least the last 15 seasons.

• 117: The number of games over the last four regular seasons that have ended with a margin of victory of 3.

• 70: The number of games the last three regular seasons that have ended with a margin of victory of 7.

• 80: The number of games the last three regular seasons that have had a closing spread of 7. Favorites went 33-31-6 ATS in those games.

• 52.7: The percentage of games the favorite covered during the 2017-18 regular season, the second-best rate in the last 15 seasons.

• 53.0: The percentage of games that have gone over the total in October, the highest percentage of overs for any month during the regular season over the last 15 seasons.

• 52.1: The percentage of games that have stayed under the total in December, the highest percentage of unders of any month during the regular season over the last 15 seasons.

• 73: The number of outright upsets by underdogs during the regular season last year, the third-fewest of any season since 2003.

• 55.8: The percentage of first halves that Patriots coach Bill Belichick has covered the spread in during the last 15 seasons.

• 38-22-4: The Houston Texans' record against the spread in second halves under coach Bill O'Brien, the best such mark of any current head coach.

• 16-29-3: Browns coach Hue Jackson's record against the spread in second halves, the worst such mark of any current head coach.

• 71.8: Patriots' coach Bill Belichick's ATS winning percentage as an underdog over last 15 seasons, the best such mark of any current head coach with at least three years' experience.

By the numbers: sports betting legalization

• 5: The number of states with legal sportsbooks heading into the NFL season. In addition to Nevada, Delaware, Mississippi, New Jersey and West Virginia are offering Las Vegas-style sports betting at some casinos and racetracks. You can even bet on your phone in New Jersey, even from the parking lot of MetLife Stadium, where the New York Giants are home underdogs to the Jacksonville Jaguars in Sunday's opener.

• There are minimal differences in the point spreads in different states. The Giants are 3-point underdogs at books in New Jersey and Nevada.

• Pennsylvania and Rhode Island are expected to be among the next states to enter the bookmaking game, potentially before the Super Bowl.

• 0: The number of losing Septembers that Nevada sportsbooks haves suffered in the last 30 years, according to state gaming control.

• $1.35 million: The net win from sports bets at the FanDuel sportsbook at the Meadowlands in the 17 days it operated in July.

• 2021: The year New Jersey's regulated sports betting market is expected to surpass Nevada's in terms of sportsbook win. In 2017, Nevada books enjoyed an all-time high $248.7 million net win off of $4.8 billion in bets. Research firm Eilers & Krejcik Gaming projects New Jersey books could be in store for a $442 million net win in 2021, eclipsing Nevada's win along the way. 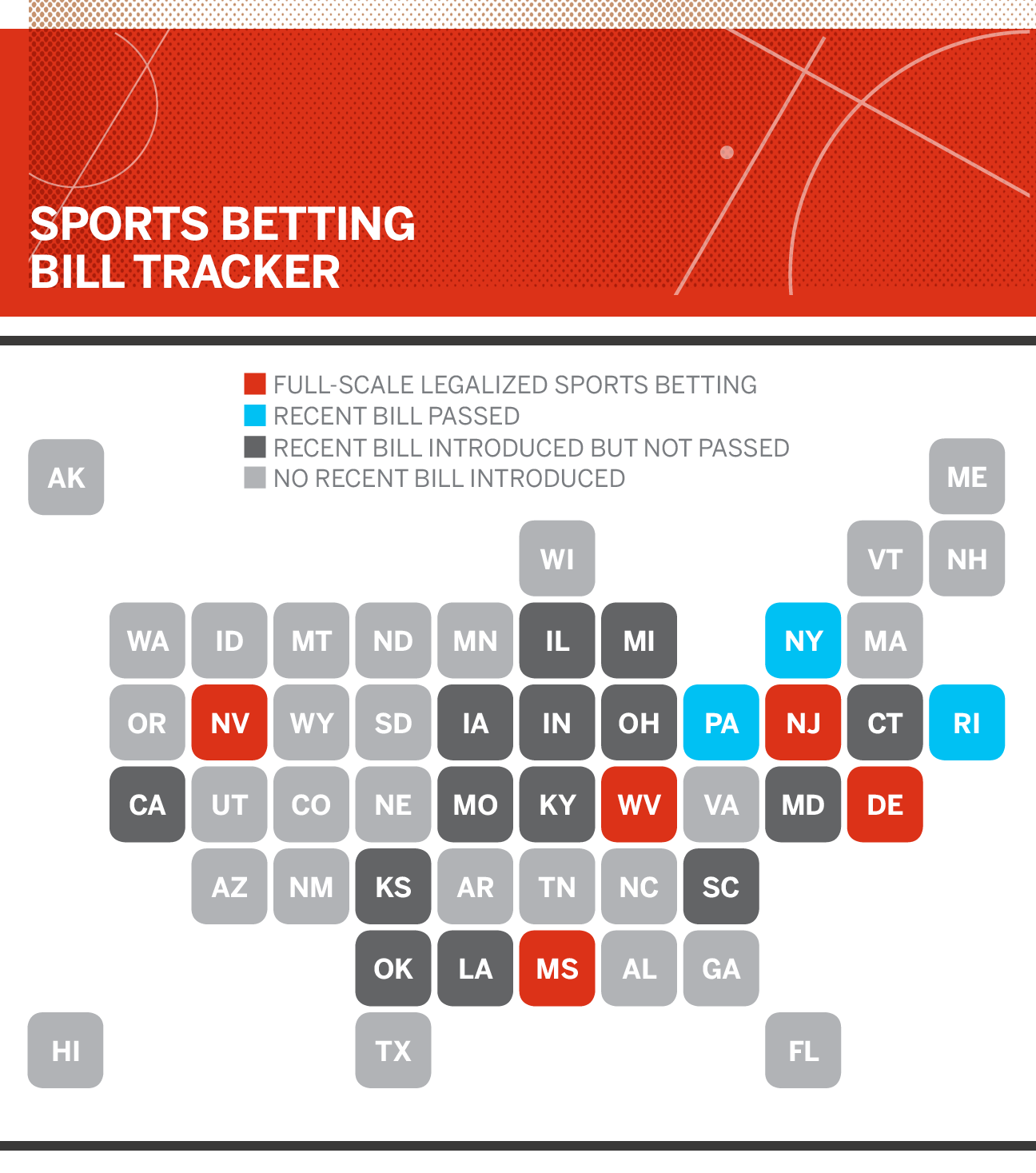 • Vikings coach Mike Zimmer has the best winning percentage against the spread (68.3 percent) of any active head coach.

• Cleveland's Jackson is the only active coach with at least two seasons under his belt to have winning percentage against the spread of less than 40 percent.

• The Cowboys are 23-36-1 ATS at home under coach Jason Garrett, the worst such mark of any current head coach.

• The Texans are 4-0 ATS after a bye under coach Bill O'Brien.

• The Ravens are 8-3 ATS after a bye under coach John Harbaugh.