Matt Leinart, Reggie Bush, Pete Carroll and Co. are the overwhelming favorites entering the 2005 season, but no modern team has won three consecutive national college football championships. If that trend holds true, a new champion will be crowned at the Rose Bowl. Here's a look at the three strongest challengers to replace the Trojans.

Texas Longhorns
Texas has the best chance of dethroning the Trojans. Overcoming losses of star performers such as running back Cedric Benson and linebacker Derrick Johnson is nearly an impossible task. However, the Longhorns have enough returning starters and young, emerging talent to run the table in 2005. 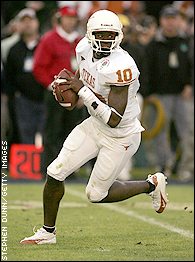 Quarterback Vince Young is the focal point of an offense that returns eight starters. Tackle Jonathan Scott anchors a talented offensive line with four returning starters, and wideout Limas Sweed and tight end David Thomas are back as Young's favorite targets. If Young can build on his Rose Bowl performance and become more efficient as a passer, this unit has a chance to be more explosive and even tougher to defend than a year ago.