Whether you had a rooting interest or not, Miami-Florida State became appointment television in the 1980s, two ascendant programs that proceeded to tear up everything we thought we knew about college football all while remaking it in their own image.

Sure, the rivalry no longer has championship implications every time the teams play. But its importance can never be denied. That is why it will be fun to relive the best games and moments in the rivalry all day across the family of ESPN networks, culminating with their unforgettable showdown in 2002 at 7 p.m. ET on ESPN.

Sure, it has been years since Miami and Florida State fought each other for the top spot on the college football mountain, but that does not diminish their heated rivalry nor its place in history. ESPN writers Andrea Adelson and Bill Connelly look back at a rivalry that elevated college football to new heights.

What stands out about the Miami-Florida State rivalry?

Adelson: I grew up in South Florida when Miami-Florida State burned white hot as the must-watch rivalry game in the nation. Apologies to Michigan-Ohio State and Army-Navy, but no rivalry during the Miami-Florida State heyday matched its undeniable appeal: The incredible athletes on the field, swaggerin,' trash-talkin' and hatin,' under the high noon sun with national championship implications on the line. I used to set my calendar around Miami-Florida State, because nothing else really mattered. And honestly, if you need any photo to illustrate what made this rivalry unique, flip back to 1989. Sebastian the Ibis, Miami's mascot, was nearly arrested for trying to extinguish the flaming spear FSU mascot, Osceola, plants at midfield.

Connelly: In its heyday, this rivalry was a unique combination of important, new and mischievous, and I thought that long before I learned how Sebastian was detained and nearly arrested. Combine all the swagger of Deion Sanders and (insert your choice of Miami defensive lineman or wide receiver here) with a game that was, at worst, about the third-most important game of the year nationally (despite the fact that neither team had any sort of historical profile before the '80s), and you've got a generation-defining rivalry. In 1987-88, FSU went 22-0 against teams not named Miami and 0-2 against the Canes.

In 1991-92, the Noles were 23-1 against others but went Wide Right twice against the U. The winner of this game was a top-10 team in 19 of 21 years from 1986 to 2006. That's been the case twice since. These teams combined for four or fewer losses nine times between 1987 and 1996 and three more times in 1999-2001. That has happened once since. This was an incredible enough rivalry that the ACC created two ridiculously named, geographically silly divisions just to keep them apart and pave the way for years of Miami-FSU conference title games.

What's your favorite game/moment in the series?

Adelson: I am going to be greedy and pick two. My first choice is purely sentimental and based on my childhood memories alone. In 1988, Florida State went into the season ranked No. 1, talking an inordinate amount of smack about the Miami game being "unfinished business" from the previous season. Also they put together the Seminole Rap video because ... ? After Miami won 31-0, I took so much satisfaction in the victory, I hung up the Miami Herald sports front page in my room until I left for college. My second memory is the 2000 game. It was my first year on the Miami beat, and you could sense the Hurricanes were on the precipice of returning to their 1980s glory. When Jeremy Shockey caught the winning touchdown pass in the end zone where I stood, I remember the pandemonium breaking out all around me. That remains one of the most epic plays in a long line of them in this series. 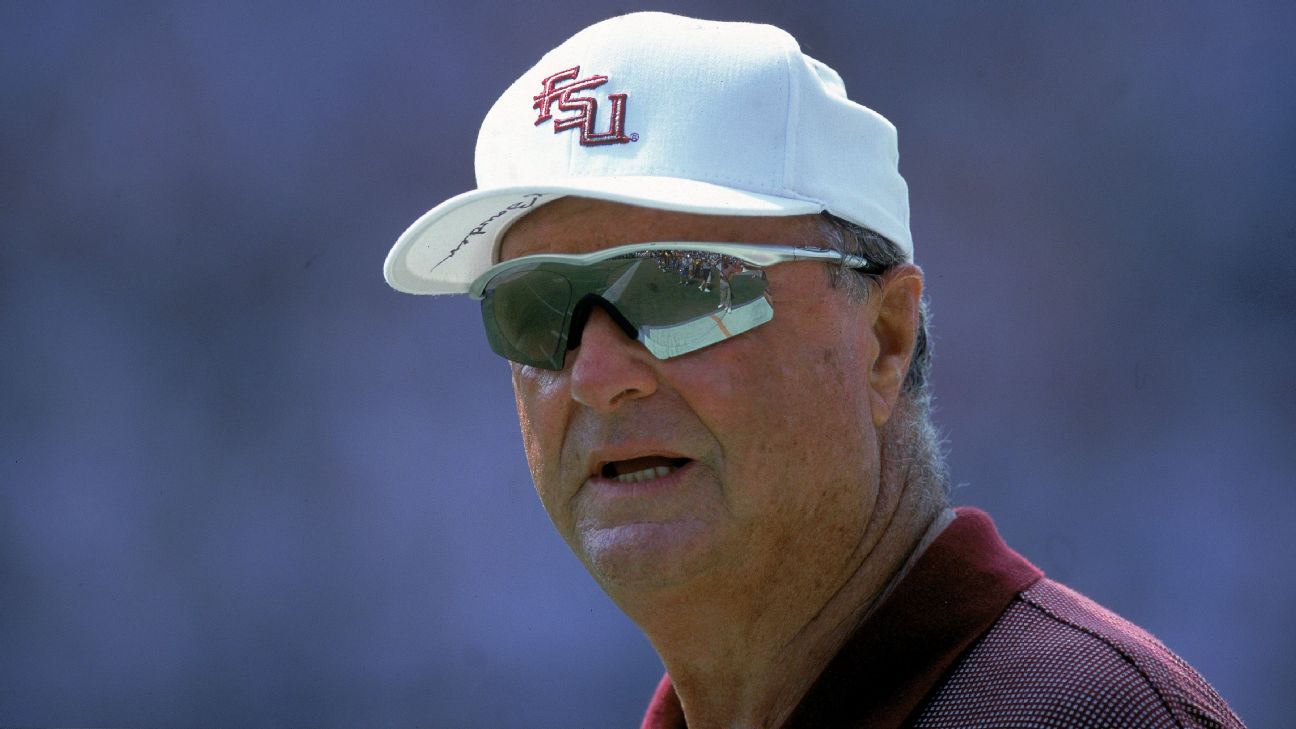 Connelly: In terms of intensifying a rivalry, there's nothing more delicious than 2000. Thanks to Miami's recent rebound, it was the first all-top-10 matchup in the series in four years and the first such game involving a No. 1 team in seven years. The band was all back together, and they played Wide Right. After Shockey's touchdown, FSU got close enough for Matt Munyon to try a field goal, and he didn't miss it left or short. There was only one direction that kick could drift. And then on top of that, the one-loss Noles still reached the national title game instead of the one-loss Canes. Bitterness and perceived injustice is seasoning for a great rivalry.

I always felt FSU's selection for the 2000 BCS title game was justifiable. The Seminoles had the better loss (technically) and had beaten two other top-10 teams by a combined 84-14. It was a better résumé by decimal points. And not that it should have mattered, but FSU was by far the more proven commodity at the time, too.

Adelson: I remember asking Miami coaches and players how they felt about beating Florida State but somehow losing a spot in the national championship game to the Seminoles. It made no sense to them. It made no sense to me. And honestly, Miami's loss to Washington in Ken Dorsey's first road start would be considered a "quality loss" in today's vernacular. (Washington finished 11-1.) Miami should have been in three straight national championship games. On the other hand, if Miami had gone to the Orange Bowl instead, we would have been deprived of the brawl on Bourbon Street between the Hurricanes and Gators before the Sugar Bowl.

What was the most important game in the series?

Adelson: 1987. The Wide Right games get more notoriety because of the heartbreaking way those games ended (for Florida State). But there is one thing Miami and Florida State fans can agree on: The 1987 game sent this rivalry from regional to national in the three hours it took to play. The sheer talent on the field is mind-boggling to even consider. A whopping 56 players in the game went on to play in the NFL. That includes the future NFL Hall of Fame matchup between Sanders and Michael Irvin. Bobby Bowden opted to go for the win instead of a tie, and Florida State failed to convert. Miami won the national title; Florida State finished second. It is hard not to think about what would have happened had overtime been in the rules in 1987.

On Oct. 3, 1992, Florida State misses a field goal in the waning moments to fall to Miami for the second straight season.

Connelly: 1987 is the correct answer, but here's an underrated one for you: On Nov. 12, 1983, Miami was 10-1 and up to sixth in the country. It had ranked higher than that for only one week, in 1967. The scenario was: If the Canes beat 7-4 FSU in Tallahassee, they would host No. 1 Nebraska in the Orange Bowl. If they didn't, they probably would be relegated to the Citrus Bowl. With Miami trailing 16-14 with under two minutes left, freshman Bernie Kosar drove Miami the length of the field and kicker Jeff Davis poked in a 19-yard field goal at the buzzer. The heartbreaking reality for FSU was that the score could have been 17-14 had the Noles gone for two when they scored to go up 9-7 earlier in the game. Bobby Bowden said after the game that he had "misfigured" the score.

When you think about all the things that had to happen for Howard Schnellenberger's team to win the 1983 national title -- unbeaten No. 2 Texas losing to Georgia in the Cotton Bowl, Nebraska famously failing on its 2-point conversion attempt and falling one point short in the Orange Bowl, etc. -- the win over FSU was just as important. Without it, maybe the dynasty still eventually takes flight, of course, but the butterfly effect of that game was maybe the biggest in the series, even if it doesn't get mentioned as a classic.

What player best personifies the rivalry?

Adelson: The default answer is Deion Sanders just because he embodies everything about this rivalry: Elite player with sick playmaking skills, unafraid to get in your face, talk trash and then back up everything he just said. But here is the interesting note about Sanders for those who might have forgotten: He never beat Miami.

Connelly: Granted, Chris Rix losing five times to Miami has its own kind of defining characteristics, but as you mentioned, because Miami controlled the rivalry during its most important span (winning eight of 10 between 1985 and 1994), I think a Hurricane deserves the nod here. I've got just the one: Michael Irvin. He brought plenty of playmaking and trash talk to the table in his own right, obviously, and in three games against FSU -- all wins -- he caught 15 passes for 317 yards and two scores.

Adelson: I am happy you mentioned Irvin. When we did our roundtable about our favorite players from the 1980s, I chose Irvin. I loved everything about him -- that swagger and that flapping white towel he wore hanging off the front of his pants.

Connelly: Growing up in OU country, I got to witness a whole bunch of people loathing Irvin with every fiber of their existence ... and then forgiving him when he went to the Cowboys and won Super Bowls.

Adelson: I have thought about this question often, mostly because I have no good answer and I want to have a good answer. I am not sure Miami-Florida State will ever reach the heights we saw when these teams were championship contenders year in and year out over a decade-plus. So much has changed in college football, starting with recruiting. There was a time when Miami and Florida State had their pick of the top prospects in the state. But their success ended up being a double-edged sword, as programs from across the country made the state of Florida one of their top recruiting destinations and the talent dispersed. Facilities never mattered much when these programs built themselves up. Now, they matter an inordinate amount. To start, both programs need to recruit at a top-five level at the same time over a consistent period of time, keeping elite in-state talent home.

Connelly: Make great coaching hires, recruit well, win big, play big games. Obviously that's far easier to describe than to actually do, but that's the only answer. Hoovering up every good prospect in the state is obviously far more difficult than it used to be, but you can still sign top-five classes at FSU and top-10 classes (if not better) at Miami. A great head coach can work with that. So when these two teams have great coaches again -- we'll see whether Mike Norvell and Manny Diaz fit that bill -- they'll play in huge, meaningful games again.

That said, it'll never again mean what it meant in the late 1980s and early 1990s (and in its brief turn-of-the-century encore), simply because neither program is a usurper anymore. That's part of what made those games so amazing. Not only did you have top-five teams playing games with national title stakes but you had two new and incredibly brash powers doing it. Since we don't have many independents anymore, and since this sport has gotten awfully good at slapping down usurpers, I'm not sure that can be replicated.