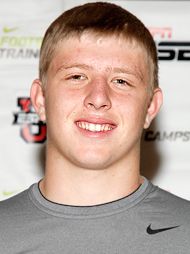 This guy may be one of the best pure passers this class has to offer. Sudfeld possesses prototypical measurables, close to elite arm strength, a smooth and quick release and more than adequate athleticism for the position. Works mostly from the shotgun in a multiple spread scheme, but takes turns from under center as well. Ryan Mallett would be a favorable comparison, but obviously not quite the same arm. Is an imposing player and certainly looks the part. He shows impressive overall touch, timing and accuracy. He gets good RPMs on the deep-out route and is able to fit the ball into some tight spots. Displays the arm to make every throw on the field. He has a very smooth and relaxed throwing motion. Keeps the ball high while dropping and shows a compact, quick delivery. Mechanics are consistent, and he is a very confident passer -- stands tall, steps into his throws and is very balanced. Sees the field well and can get the ball out quickly under duress. Possesses a powerful downfield arm and demonstrates an array of different throws. We really like his ability to hit his fifth step and get the ball out on time on throws outside the numbers along the sideline. He has a knack for zinging the skinny post, shows the touch to lay the ball in between linebackers and safeties and does an excellent job leading receivers on slants, crossing routes and digs. Also does a good job of recognizing coverages and leading his WRs to soft spots in zone. Drop speed and footwork away from center is very good for such a big player. Sells pump-fakes and play-action fakes well, but is still a bit raw in this area and has room to sharpen up. Where Sudfeld is impressive is in his ability to buy time, move around the pocket and make plays with his legs. Shows initial quickness to avoid, re-set and deliver the ball, but also be effective as a runner and gain valuable yards after things break down. Sudfeld is flying way under the national radar and in our opinion is a high-end BCS caliber talent. Excellent prospect and in terms of pure arm talent he is ahead of the curve. ... for full access to RecruitingNation become an ESPN+ Subscriber

Insiders can access ESPN.com's complete RecruitingNation coverage, plus exclusive expert analysis from Scout's Inc. Already an Insider? Sign in above.
Become an Insider