LAS VEGAS -- The 2013 New Level Athletics 7on7 West Regional in Las Vegas kicked off the West passing tournament season over the weekend. With 46 teams and hundreds of players in attendance, some of the top talent in the region put their skills on display. Dozens of players were deserving of recognition after strong showings, but in the end, 10 stars shone brightest in the desert, where offensive players were forced to fight through strong winds and tough defenses.

Team AIGA came away with the title, as well as two players on our list.

Note: The RN Top 10 is a RecruitingNation feature that will appear throughout the camp and combine season and rank prospects based strictly on their on-field performance at that particular event. It does not reflect what their overall prospect ranking will be when the 2014 rankings come out this spring. 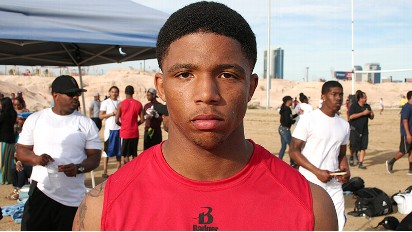 Hale's weekend was cut short when his team was disqualified Sunday because of a fight. But during pool play Saturday, few defenders put together a more complete performance than Hale. The cornerback holds six offers at this point, as Arizona, Arizona State, Boise State, California, Nebraska and Washington State have stepped forward.

He had a few early pass deflections Saturday, then locked up opposing wide receivers to the point that he wasn't tested again the rest of the day. As part of a loaded secondary both for his high school and 7-on-7 team, Hale will have a chance to make several more statements between now and the end of the regular season.