Thursday's early morning weightlifting session for the 35 students at the Manipur State Weightlifting centre in Imphal ended with a special instruction. "I told them to watch Mirabai's competition at the Commonwealth Games," says coach Anita Chanu. Mirabai might be India's premier lifter today with a World Championship gold medal, but many years back she was just another trainee in front of Anita. "I wanted the children to see what was possible for a weightlifter," says Anita. The TV lesson would be worth it. At Gold Coast, Mirabai put on an exhibition of nearly flawless weightlifting to take gold.

While the Commonwealth field is a weak one, Mirabai's numbers are truly remarkable. 196kg would have been enough to win a silver at the 2016 Olympics, while her clean and jerk lift of 110kg was better than that of the Olympic champion.

Mirabai's talent had never been in doubt, reckons Kunjarani Devi, who herself won four Commonwealth Gold medals and once held the National Record. "After me there was a period where Indian weightlifting really struggled. Mirabai changed that. She is a one in a generation lifter," Kunjurani had said in the past.

Mirabai had only narrowly missed out on a gold medal at the 2014 Commonwealth Games, when she was just 19. Her total lift of 170kg was just 3 kg behind the gold medal-winning total of 173kg. In the four years since, Mirabai has added 26kg to that best as her increased strength came into play.

This isn't to say that Mirabai uses brute strength. While sheer power will suffice in powerlifting events, Olympic lifting requires a combination of muscular ability, balance and flexibility. Mirabai has all three. "Her technique is very smooth. She is very explosive and completes her entire movement very fast. She gets under the bar really quickly, which is very important," says coach Anita. 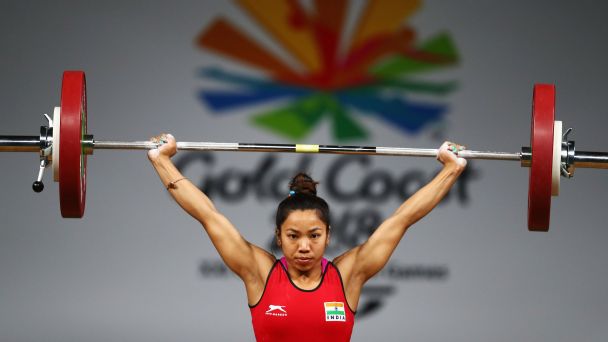 Watched in slow motion, Mirabai's technique is almost machine like in its consistency. Each of her lifts in the two movements is nearly identical. Where other lifters have to fight to get the weight stationary over their head, the bar remains almost perfectly still for Chanu. By keeping the time her muscles are under stress to a minimum, she gives herself the best chance of making a clean lift.

"She has a great sense of making sure the bar's centre of gravity is between her feet. The other lifters have the bar falling forward or to the back or on one side. This makes it very hard for them," says Anita.

There is another factor behind Mirabai's recent success- confidence. Weightlifting is as much about your ability as about managing nerves. The three lifts that athletes get serve as a stepping stone to lifting heavier weights. Miss one lift and your chance of lifting heavy worsens. In the past Mirabai had been guilty of missing early lifts, which would put pressure on her later ones. At the Rio Olympics, she managed just one clean lift in six attempts. At last year's Commonwealth Championships, she missed three lifts. Although she still won gold, the flubs restricted her total to 189kg. At the World Championships, she missed just one lift - in the snatch. As a result, she finished with a then record 194kg.

Mirabai said she gained enormous amounts of confidence from the World Championship gold and that showed at Gold Coast too, with not a single failed lift.

With none of the lifts appearing to cause Mirabai any discomfort it remains to be seen exactly how much she could be capable of. At a practice session in Patiala, her coaches say she has managed to lift 112kg in the clean and jerk although she has never attempted that weight in competition. Coach Anita though believes that lift could come in a matter of time. "She has a lot of ability. I know Mira can do even more," she says.