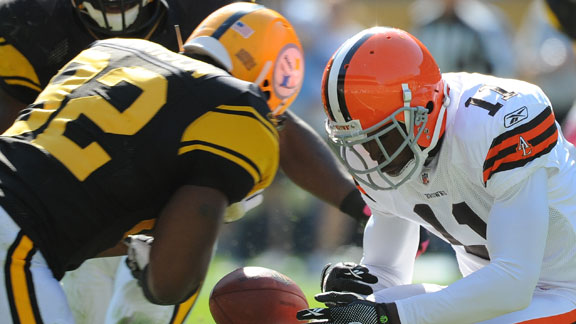 Stephen Dunn/Getty ImagesHarrison's hit on Massaquoi carried with it a heavy fine from the league.

While Pittsburgh Steelers linebacker James Harrison appeals the $90,000 worth of fines that he's been hit with for head-to-head hits against Cleveland Browns receiver Mohamed Massaquoi and New Orleans QB Drew Brees, the NFL is ramping up its public safety campaign.

On Tuesday night, it released a summary of its 2010 Player Policy Manual. And the first line gets right to the point: "All of the player safety and on-field conduct rules that follow can be summarized in one word -- sportsmanship."

The pamphlet is candid about the problems the league faces in protecting players and giving fans what they want. As it tells players: "Game-related safety presents special challenges to the League because it requires dealing with the playing rules in a manner that not only offers optimum player protection and prohibits gratuitous violence, but also maintains the intense action and physical contact that are part of football's broad appeal."

It adds: "The League recognizes that safety cannot be promoted exclusively through interpretation of existing rules or adoption of new legislation, and that the participants on the field must assume responsibility for making it work. 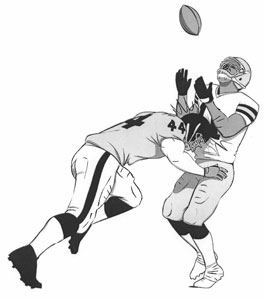 A diagram from the NFL illustrating an illegal hit.

"Accordingly, to give further force and effect to player safety rules, the League will impose fines and/or other discipline for rule violations."

In his appeal, Harrison argues that Massaquoi caused the hit to his head by moving into the path of the tackle, and that there was no head-to-head contact. As his agent, Bill Parise, told WPXI in Pittsburgh, "James ended up hitting him higher than he would have if Masaquoi had not ducked."

Harrison also insists that he never struck Brees in the back, instead landing in his side.

Here's a link to video of his hit on Massaquoi.

Here's the video of his hit on Brees.