Teddy Covers brought the energy packets. I brought the cash. My buddy Matt brought the fastest set of hands of any senior VP in the tech industry. Together, we were going to bet every play of Super Bowl XLIV. 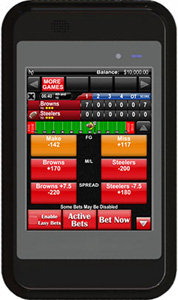 This was a plan hatched a few months before the game. I had wanted to try out the M Casino's new in-running wagering system, in which you can bet on every play during a game. And it seemed like the Super Bowl was the perfect opportunity. Matt bailed on his wife and kids to be my triggerman -- making bets so I could record everything for you fine people -- and Teddy came to make sure I didn't lose my bankroll before the Air Force flyover. Because it can happen as fast as Peyton Manning can throw away the game.

In case you missed it, here's a recap of what in-running wagering is: Cantor Gaming designed a system that enables bettors to wager on every single play in a game. Using algorithms created by brainy computer scientists, bookmakers can send out point spreads, money lines and totals that adjust as the game progresses. For example, the Saints-Colts total closed at 57. Ten minutes after kickoff, it had dropped to 49. Bettors make plays from their seats using Nintendo DS-sized handhelds or from desktop consoles in the sports book.

Here's how it happened, in running time: