Michigan State does not have its best team under coach Tom Izzo, but the Spartans are good, and getting better. After losing NBA draft picks Maurice Ager, Paul Davis and underclassman Shannon Brown, then having football star Matt Trannon decide not to play basketball this year, Michigan State had a big void in toughness and experience going into this year. Part of the void has been filled by freshman Raymar Morgan, who is talented enough to play anywhere and was one of the top freshmen in the country until he went out briefly with an injury. 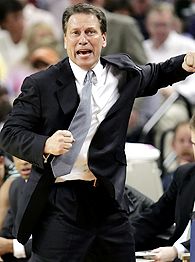 The player who has carried the biggest load has been point guard Drew Neitzel, who is coming off a career-high 32 points against Chicago State and 20 points against Belmont. Neitzel has scored 20 or more in seven of his last nine games, averaging almost 21 points per game during that stretch. Neitzel is vastly underappreciated as a point guard and is clearly one of the best floor generals out there. The lefty can score and find open people, and he fits the description of an outstanding point guard, quarterback or catcher -- he leads and he wins. Neitzel is good enough to find a place in the NBA someday, and he is good enough to garner more mention among the nation's best point guards. In fact, while Wisconsin's Alando Tucker has been the Player of the Year in the Big Ten thus far, no player in the Big Ten has been more valuable to his team than Neitzel.