After coming close so many times before (1980, 1986 and 2004), the Houston Astros have reached the World Series for the first time in franchise history. This has to mean a lot to the fans of Houston who have supported the team from the time they were known as the Colt .45's. Now that Houston has reached the World Series for the first time in 44 seasons, a lot of people, myself included, must be thinking about judge Roy Hofheinz. He bought the team and brought it to Houston, and also had the vision to build the "Eighth Wonder of the World," the Astrodome, in 1965 (it was completed in 1966). 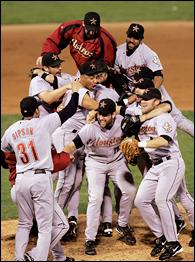 I'm happy for veterans such as Craig Biggio and Jeff Bagwell, both of whom have spent their entire major-league careers with the same franchise, something you rarely see anymore. It's quite an accomplishment because both Biggio and Bagwell have been there so long (Biggio since 1988 and Bagwell since '91). Until now, they have never experienced what it is like to play in the World Series -- and you are talking about two of the best players of their era.

The feeling also has to be satisfying for veteran pitchers Roger Clemens and Andy Pettitte. They probably feel like I felt going back to Houston in 1980. (When I was traded from Houston to Cincinnati in 1971, I hoped one day to come back to Houston and help the Astros win a championship, because that was where everything started for me. I'm originally from Texas and came up through the Houston organization. Everything in baseball started for me there. That's the reason I went back there after I left Cincinnati.) Clemens and Pettitte went back to Houston last season to try to do the same thing. They both grew up in Texas and both won championships like I had, then decided to try to help the team from their hometown win a World Series.