WASHINGTON -- The scheduling gods nailed it.

With that in mind, here's a viewer's guide to Harper's return.

The minute he was drafted first overall by Washington, back in June 2010, Harper became the face of the franchise. He was the Rookie of the Year in 2012. He was the MVP in 2015, becoming the youngest player ever (22) to win the award unanimously. He helped lead the Nationals to their first taste of the postseason since moving from Montreal in 2005, as the team won four division titles during his seven seasons in D.C. He won the Home Run Derby there last summer, in front of his hometown fans, in as dramatic a fashion as the Derby could possibly be won.

Harper's tenure in the District, though, wasn't all puppy dogs and ice cream. The right fielder wasn't a model of consistency at the plate. He occasionally failed to run hard down the line on routine grounders. Toward the end of his 2015 MVP campaign, he publicly called out Nats closer Jonathan Papelbon for plunking Manny Machado, which led to Papelbon famously choking Harper in the dugout a few days later. But for better or worse, Harper and the Nationals belonged to each other, and as marriages go, it was by and large a very happy one.

Despite the merry matrimony, and despite the Nats offering him a 10-year, $300 million contract at the end of last season, Harper opted to test free agency. He passed that test with flying colors. Actually, it was more like phlying colors: On Feb. 28, the 26-year-old slugger agreed to a 13-year, $330 million deal with the Phillies. Although rumors of Harper landing in Philadelphia had been swirling for months, the fact that he signed not with the Yankees or Dodgers or White Sox or Padres but rather with a division rival -- one just a couple of hours up the road and geographically closer than any other National League East club -- is kind of a big deal. So too, then, is his return.

It won't be a sellout. Not on a midweek game in early April for the second home series of the season. And not on a night when temperatures are expected to dip into the 30s.

That said, Nationals Park should be way livelier than the calendar suggests.

What It's Like To Lose Your Job To Bryce Harper 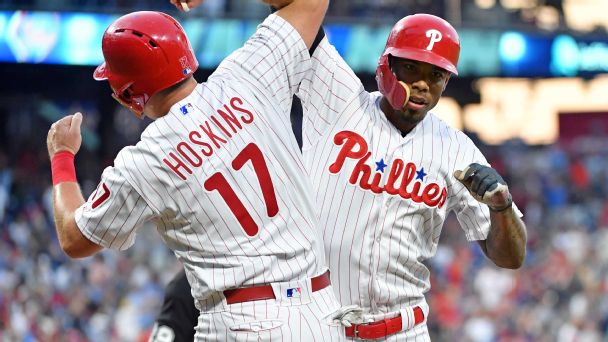 When the Phillies signed You Know Who, Nick Williams was afraid to buy furniture -- because he was pretty darned sure he was about to be traded. Eddie Matz »

"The place will be pretty packed," says Steve Nickel, who owns a Maryland-based company called Sports Tickets Unlimited. "Especially for a game they would have drawn 14,000."

Instead of 14K, Nickel expects the gate for Harper's return to be nearly double that. Having ace Max Scherzer on the mound certainly helps. As does the fact that it's Military Appreciation Night (two free tickets per serviceperson).

But the biggest bump will come from busloads of Philly fans making the trek down I-95. That's not necessarily a normal thing -- last season, attendance when the Phillies visited was up just 2 percent over the season average at Nats Park -- but these are not normal times.

Just how abnormal will Harper's homecoming be? With the exception of three sections behind home plate, the only area in the entire lower bowl that was sold out on StubHub as of Monday morning was Section 142 ... which just so happens to be in right field.

When Mets catcher Wilson Ramos' name was announced on Opening Day, the sellout crowd at Nats Park gave the former Washington backstop a warm ovation. As for Harper, he's not likely to receive the same treatment.

"Absolutely," season-ticket holder Mitch Bernstein says when asked whether he plans on booing Harper. A 69-year-old retired attorney from Graves Mill, Virginia, Bernstein can't make Tuesday's contest, but he'll be there Wednesday and thinks the boo-birds will be in the overwhelming majority for both games of the Phillies series.

"Hope the door didn't hit you on the way out. I'm not his supporter anymore. I don't have fond memories of him anymore. He's going to be playing against me as the enemy." Nats season-ticket holder Mitch Bernstein on Bryce Harper

"You feel deserted," says Bernstein, who was in attendance on Opening Day. He wore a Harper jersey with a giant, black X spray-painted across the back, an outward sign of his disenchantment. "It's one thing to go as a free agent. Everyone gets that. But to go to your closest division rival? It's like, oh, so it's not really about us. He wasn't in love with Washington. You chased the buck, and that's where you wanted to go. You're going to be a Phillie for life. Thirteen years, no trade, no opt-out. Well, if that's your identity, we don't fit in there. Nice to have had you, hope the door didn't hit you on the way out. I'm not his supporter anymore. I don't have fond memories of him anymore. He's going to be playing against me as the enemy."

Not all Nats fans see Harper that way. "I've just been a fan of Bryce Harper for so long," Cole Fortner says. A 17-year-old senior at Spotswood High in Virginia, Fortner was also at Opening Day, rocking a Harper jersey with the former MVP's name covered up by a strip of gray duct tape that had the last name of his new favorite player (young Nats slugger Juan Soto) written on it.

Even though Fortner felt compelled to deface his jersey, he still has plenty of love for Harper: "I don't think I'd throw boos at him. I liked him for so long. I can't just throw that away. He's still a great player. He still did a lot for us."

What Harper's former teammates are saying

"It's going to be fun," Scherzer says of what it'll be like to see Harper step into the batter's box against him. But just because it's fun doesn't mean it's not surreal. "We've only seen him in a Nats uniform. So, obviously that's weird."

Not that Scherzer thinks he or his teammates will be affected. "This is baseball. We're so used to guys changing teams all the time. For us players, it doesn't really faze us too much to see guys in new uniforms."

That's not to say the Nats won't be fazed at all. "There might be a little extra energy when he's in the box," closer Sean Doolittle says. "You kind of have to put that to the side because he's hitting in the middle of the order for them. He can do damage if you let your guard down, even for a second. But at the end of the day, he's on a division rival. Late in the game, if he's in the box, it's going to be all business."

The business of trying to get Harper out is a long-term proposition, and that's what seems to matter most to the Nationals. "He's signed [with the Phillies] forever, basically -- or at least forever in my career," says Scherzer, whose team is slated to play the Phillies 247 times over the course of Harper's 13-year contract. "We're going to be facing each other a lot. This is just Round 1."

What Harper will do

During his time with Washington, Harper's home/road splits were pretty neutral. Of his 184 regular-season homers, exactly half came at Nats Park. According to his tOPS+, a cool Baseball-Reference.com metric that tells you where a player produces best (100 would be neutral), he was slightly better at home (103) than away (97). So let's throw location out the window.

When it comes to platoon splits, that's a different story. Harper's .943 career OPS versus righties is almost 150 points higher than it is against lefties (.796). Although Scherzer is right-handed, he's not just any righty -- he's a three-time Cy Young winner who limited lefties to a .609 OPS last season, third lowest in the National League. For the record, outside of a few showdowns during spring training workouts, Harper and Scherzer have never faced each other.

Last but not least: the intangibles. On the one hand, Harper has a reputation for loving the big moment and thriving when the spotlight is brightest. His five Opening Day home runs (most among active players) backs that up. But his postseason career tells a different story. Although his home run rate in October (5.6 percent) is higher than his regular-season clip (4.7 percent), Harper carries a career average of .211 in the playoffs, and an .801 OPS that's significantly lower than his regular-season mark of .902.

So what does it all mean? That come Tuesday at Nats Park, Harper has a 100 percent chance of going X-for-Y, or Y-for-Y, or something in between.

Our completely haphazard and unscientific prediction: 1-for-3 with a walk, a strikeout and a solo homer. And a standing ovation. And a chorus of boos.

If you would have told me 5 years ago I would be walking into Nationals Park as an opposing player, I would've told you that you were crazy. Five years later, I'm doing just that. I remember the first day I walked into Nats Park. My first base hit. My first home run. And, of course, my first standing ovation. Nationals fans delivered that first ovation. The things that I will miss most are the relationships I gained on a personal level with so many of the Nationals staff and workers around the ballpark. Every day I walked in, I got a smile or shared a laugh with you. I especially want to thank The Lerner Family and Mike Rizzo for the unwavering support they showed me during my tenure in DC. The city of DC was home. Filomena's, The Silver Diner, The Italian store, and countless other places helped make it feel like home. You, Nationals fans, made me one of your own for the entire time I was a part of the Nationals organization. I'm so blessed to have been able to play for a fan base that cared so much about our team each and every night. You will always hold a special place in my heart no matter what. I look forward to continuing Harpers Heroes with LLS in the DMV as well as making sure the legacy fields bearing my name are the best youth fields in town! When I run on the field tonight I am sure to hear some boos, but I will always remember the cheers and the screams that are still with me right now, as I start my new chapter. So for that, DC, THANK YOU.