About a minute into an explanation of what it's like trying to evolve from the strikeoutingest hitter in baseball history into something more, Joey Gallo wanted to make sure he wasn't misrepresenting himself. The idea of a 6-foot-5, 250-pound conqueror of baseballs metamorphosing beyond what he's always been, what's in his nature, would be a distortion of the truth.

Gallo, the Texas Rangers' 25-year-old center fielder, is a player of manifold skills, from a keen eye, to a powerful right arm that pumped 98 mph fastballs in high school, to a freakish amount of athleticism for a massive human, to a swing that regularly challenges the limits of how far man and bat can combine to hit a baseball. More pointedly, Gallo also happens to be the archetypal modern baseball player, a leading evangelist and practitioner of a game in which home runs, walks and strikeouts constitute well over one-third of all plate appearances.

If the game is broken -- and considering how different it looks from even a decade ago, such sentiment isn't uncommon -- Gallo embodies and embraces that brokenness. Nearly two-thirds of his plate appearances this season result in a home run, walk or strikeout. Whatever one cares to call this brand of baseball -- Three True Outcomes baseball, millennial baseball or slug baseball, for both the emphasis on hitting it hard and the pace at which it operates -- Gallo is its undeniable king, and he's proud to wear the crown.

"'I've always been that player," he said. "It's not like I was built to be that. It's who I've always been. I mean, 10 and under, 11, 12 -- I was hitting home runs. I struck out more than everyone. And I walked a lot because they pitched around me. If they made a mistake, I hit it out. If I wasn't feeling good, I struck out. Even high school was that. I enjoy home runs. When you think of baseball, the first thing you think of is a home run. Home runs are cool. That's what everyone likes to watch. That's what they show on the highlights."

The Three True Outcomes -- named jokingly by now-ESPN editor Christina Kahrl on a Usenet message board in the 1990s to highlight the game's three main results that don't involve defense -- weren't always so prevalent. After a post-World War II jump past 20 percent, the number slowly ticked up, cracking 30 percent in 2012. It rose to 32.33 percent in 2016, 33.48 percent the next year and 33.75 percent last season. This year it's at 35.58 percent, up more than 5 percentage points from seven years ago. Never in the live ball era has baseball seen such a large percentage-point uptick over a seven-year span.

Gallo first heard the term Three True Outcomes when he was drafted out of high school in Las Vegas in 2012. He needed to look up what it meant and figured it was derisive, similar to the comparisons he drew to Adam Dunn and Chris Davis, also left-handed sluggers with strikeout issues. Gallo, of course, is a better baserunner and is far better defensively than Dunn or Davis. His sojourn around the diamond from third base to first base to the outfield wound up with him recently taking the Rangers' center field job, making him among the largest regulars ever at the position, alongside Dave Winfield and Josh Hamilton.

His distinctiveness only begins there. It's at the plate where Gallo is particularly unique. This season, he has 12 home runs, 31 walks and 57 strikeouts over 157 plate appearances -- a Three True Outcomes rate of 63.7 percent. Only two other hitters who qualify for the batting title are even over 50 percent: Bryce Harper (53 percent) and Daniel Vogelbach (50.4 percent). For his career, Gallo is at 58.9 percent, more than 4 percentage points higher than Aaron Judge, who has the second-highest Three True Outcomes number in baseball history.

'You owe it to the game' 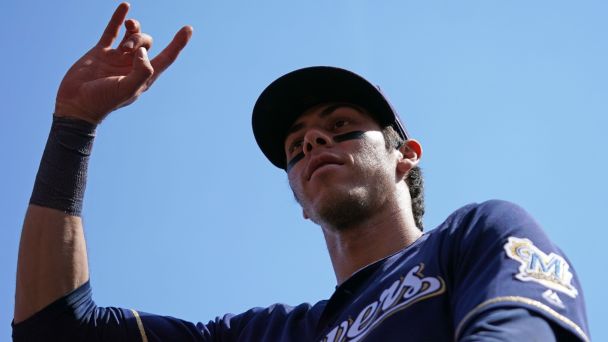 This leads to all sorts of wild facts and figures about Gallo, and the latest came last week when he hit his 100th career home run. Over his 1,419 career plate appearances, Gallo has only 93 singles. It was one thing for MLB to finish last season with more strikeouts than hits for the first time. A player reaching a home run milestone -- and being the fastest American League hitter ever to do it -- before cracking that same number of singles is unprecedented.

Much of that is owed to the defensive shifts that greet Gallo every plate appearance. Nearly every left-handed hitter in baseball experiences them, though not quite as egregiously. Against Gallo earlier this season, the Toronto Blue Jays had a completely empty left side of the infield, four outfielders and a shortstop just to the right of second base, and a second baseman playing so deep he almost could have been counted as a fifth outfielder.

When Gallo jokingly tweeted in December "This is all I want for Christmas" in response to a story about a possible shift ban, he was lambasted by fans who had seen him hit .206 in 2018.

"I always want a higher average," Gallo said. "I don't like hitting .206. But right now it's kind of part of the game, especially with the shifts. You don't just learn to hit the other way. If I'm slapping singles down the line, am I still Joey Gallo? Am I still productive? I can't try to play to that, because it's not me, and I like to play in the major leagues. I get paid to drive guys in and hit the ball out of the ballpark."

He has done so with aplomb, hitting 41 home runs in his first full season two years ago and 40 last year. To marry that with better plate discipline would make Gallo among the best hitters in baseball, which is precisely what he has been in 2019. Gallo's raw power -- his ability to hit any pitch 450 feet -- expanded his swinging area to an unhealthy size. Coming into this season, the Rangers implored Gallo to shrink his zone; the upside would far outweigh the downside.

Gallo's work on fastballs in particular has led to his .248/.395/.608 line. Last season, he swung at 26.7 percent of fastballs outside of the strike zone, according to ESPN Stats & Information. This season, it's just 11.9 percent, the fourth lowest in baseball behind Tommy Pham (9.2 percent), Brandon Nimmo (10.9 percent) and Mike Trout (11.4 percent). On fastballs in the strike zone, Gallo is slugging 1.021, the best in the major leagues. He's laying off other junk too. His chase rate on all pitches outside the zone has dropped from 29.3 percent to 19.6 percent.

"It's hard as f---," Gallo said. "It's really hard. Especially nowadays when pitches are starting down the middle and end up 3 inches off the plate at 100 mph. It's pretty tough to do. But experience helps. You see it over and over again, and it starts to become the norm."

What's scary is the wide berth for improvement. Even near the Mendoza Line, he was a productive hitter. Even with the swing-and-miss in his game -- Gallo's 36.3 percent strikeout rate is second highest in the major leagues -- he is looking better than ever. Only Trout has a higher walk rate than Gallo's 19.7 percent. That's the sort of company he prefers to keep.

So he'll shake off games like Wednesday's three-strikeout night in Kansas City and focus on the two more enjoyable outcomes. If Joey Gallo in the minor leagues was about legendary batting practices and Joey Gallo in 2017 and '18 was about home runs, Joey Gallo in 2019 is about becoming the hitter he can be, the one who can show that Three True Outcomes baseball can be pretty spectacular in its own right.