A pair of potential playoff previews heads the schedule on a weekend when the big leaguers share the stage with the Little League World Series.

Here's what has caught our interest:

The Dodgers, Astros and Yankees are baseball's Big Three this season, but since the start of June, the Indians have the league's best record, playing .700 ball. What will it take for the Tribe, who are in the midst of a four-game series at Yankee Stadium, to work their way into the conversation?

Eddie Matz: Against teams with winning records, the Yankees are 12 games above .500. The Astros are even better, at 15 games over. And the Dodgers are 16 over. To join the cream-of-the-crop conference call, the Indians (22-27 against plus-.500 clubs) need to prove that their recent run -- which includes 20 wins in 23 games against the abysmal Royals and Tigers -- isn't merely a product of soft scheduling. If they finish their current Yanks/Mets road trip with a winning record AND if they win their late August series against the Rays AND if they get Corey Kluber and/or Carlos Carrasco back, then and only then will I be willing to even consider giving them the passcode to join the call.

Games to keep an eye on this weekend 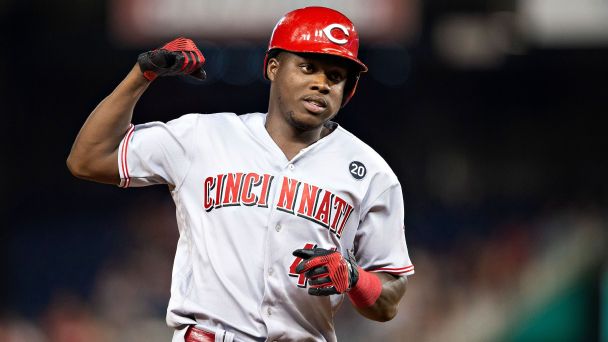 Indians at Yankees, Fri., 7:05 p.m. ET -- Cleveland rookie Aaron Civale has had three solid starts and now he faces the big boys on the biggest stage.
Brewers at Nationals, Sat., 7:05 p.m. ET -- Two of the numerous NL wild-card hopefuls square off.
Cardinals at Reds, Sun., 1:10 p.m. ET -- The Aristides Aquino Home Run Show meets Jack Flaherty, the St. Louis starter who has given up only one homer over his past six starts.
Dodgers at Braves, Sun., 1:20 p.m. ET -- Dustin May meets Max Fried in an intriguing battle of young arms.
Cubs vs. Pirates at Williamsport, Sun., 7 p.m. ET (ESPN) -- The Little League Classic has become one of the coolest special-event games on the baseball calendar.

Sam Miller: What Eddie just laid out was a problem for Cleveland last year too. The Indians beat up on the AL Central but were just 23-31 against winning teams, which reinforces the point: It can be hard to assess whether Cleveland's record more accurately reflects their talent or their geography. Given all that, I don't think there's anything they can do in the final two months to convince me they're on the level of the Astros, Dodgers and Yankees. But healthy returns of Carrasco and Kluber could convince me they have the best pitching staff of the bunch, which is certainly enough to get through October. It needs to be Carrasco and Kluber, though. Zach Plesac and Adam Plutko have been pleasant surprises but, with their peripherals, not convincing ones.

David Schoenfield: I cheated a little bit here since I'm writing this as the Indians are crushing the Yankees in the opening game of their series. This game actually has all the elements on how Cleveland can compete with the big boys. Jose Ramirez has hit two home runs and continues to bounce back in a big way from an awful first three months. Plutko has pitched well as he and Plesac (and now Aaron Civale) continue to pitch well enough. Jason Kipnis had a couple of more hits and he has had a good second half after playing at replacement level in the first half. Throw in Yasiel Puig and Franmil Reyes and the offense is much better than it was. Get Kluber and Carrasco back and you never know.

The Cubs, who play the Pirates in Williamsport on Sunday Night Baseball (ESPN, 7 p.m. ET), are projected to win the NL Central but still are clearly missing something. How hot will Joe Maddon's seat get if the Cubs have an early exit from the playoffs (or miss them altogether)?

Matz: Joe Maddon should be proud that his Cubs have the second-best record in baseball since he took over at the start of the 2015 season. And that Chicago has made the postseason four years running, MLB's second-longest active streak (the Dodgers are at six and counting). And that one of those postseason appearances resulted in the best possible outcome (hint: rhymes with Schmorld Schmeries schming). If those things don't buy a cool cushion for your keister, then I don't know what does.

Miller: Even by the speculative standards of baseball punditry, this is beyond our ken. It's fair to say that the Cubs have, despite a ton of success, underperformed hopes and expectations in the past three years. In 2016, they were the best team in baseball, and one of the youngest, with financial flexibility and cost-controlled young stars, and run by a front office that at that point might have won a poll of the greatest of all time. One might have envisioned many World Series, perhaps even an upward trajectory. By that standard, a wild-card game last year and a projected 86 wins this year counts as disappointing, and disappointment sometimes carries with it some public act of accountability.

An oral history of the 1994 MLB strike that nearly destroyed baseball. Tim Kurkjian »

But it's also obvious that Joe Maddon has not been a managerial failure by any standard, either with the Cubs or in his career, over the past decade or the past season. The wobbliness of his chair, if it's wobbly at all, would only be explained by things that are going on in the hearts and brains of Cubs decision-makers, and in the subtleties of the relationships within that organization. We're just not privy to those. So put me down for: I don't see it happening, but with known unknowns.

Schoenfield: The interesting thing here: Joe Maddon is 65 years old. By managerial standards, especially in today's game, that's old. Of course, Maddon doesn't come across as your typical 65-year-old. The other day I was talking to somebody about John McNamara. This was after he had managed the Red Sox (and lost the 1986 World Series) and was managing the Indians in 1990. I thought he was ancient and then I looked up his age and he was only 58. My point: You would never guess Maddon is 65. But given an early exit or even missing the playoffs, his age becomes a convenient excuse to not bring him back, especially if there's a younger guy out there that Theo Epstein has his eyes on. Hey, Gabe Kapler will probably be available.

The Dodgers visit the Braves in a potential National League Championship Series preview. What percent chance would you give the young Braves to win a best-of-seven with L.A.?

Matz: If that series were played right now, with Ronald Acuna doing his best impression of Wreck-It Ralph and demolishing everything that gets in his way, and with the young Braves' starters still able to move their arms when they wake up in the morning, then I'd give Atlanta a 27% chance of beating the Los Angeles Dodgers of Elysian Park. But since best-of-seven series are played in October -- when Acuna might not still be channeling his inner John C. Reilly, and when Mike Soroka and Max Fried will likely be channeling their inner Jackson Browne ("Running on Empty"), I'm going to slide the decimal point over one place and give the Braves a 2.7% chance.

Miller: I would give them a 15% chance. I did a lot of math for this. Did I do the math correctly? Oh boy. I'm not going to show you the math, just in case. But I would give them a 15% chance. But my math was based on some assumptions that come from other people's better math: According to Baseball Prospectus' third-order winning percentages, the Dodgers have hit and pitched and fielded as well as a team that should win 72% of their games. That's the best third-order winning percentage since at least 1950. That's a 116-win team (they're on pace to win 108), and it's hard to believe a team could be that good. But I still think the Braves' chances of winning are about as good as their chances of getting swept.

Schoenfield: I didn't do any math, but a 25% chance sounds about right. Actually, right now, with the way the Atlanta bullpen is pitching, it's probably less than 25%. But the new relievers have time to get straightened out. Then again, it's not as if Kenley Jansen is anything near peak Kenley Jansen. He's a big worry, the obvious fragile part of an otherwise impenetrable Dodgers team. Oh, L.A. might also have a secret weapon waiting in Triple-A: Gavin Lux is hitting .434/.517/.809 in 34 games at Oklahoma City. He could be up soon to play second base (although he has played mostly shortstop) and give them another bat in the lineup. It doesn't seem fair, does it?

The Yankees' Gio Urshela (naturally) is one of baseball's hottest hitters since the All-Star break, but Cleveland's Jose Ramirez has turned his season around after a dismal start. Which third baseman will have more total bases this weekend: Urshela or Ramirez?

Matz: Besides being hot, Ramirez has an absurd .782 lifetime slugging percentage at Yankee Stadium. However, Urshela is slugging .832 since the break, which is downright nonsensical. But Gio has little to no experience against the guys who are starting for Cleveland this weekend. In those situations, it's usually advantage pitcher. So I'll take Ramirez.

Miller: I don't know, though, Ramirez is 2 for his last 22, so for all we know he's cold again. That's the inherent downside of the hot-and-cold game, so I'll just go with what I know: If the offseason began today and every player were a free agent, GMs would spend a lot more money trying to sign Ramirez than they would to sign Urshela. Give me Ramirez this weekend.

Schoenfield: Has David Hess been traded to the Indians? Tom Eshelman? No? Then I'll go with Ramirez.

Rafael Devers is on a bit of a roll, including a 6-for-6 game Tuesday in Cleveland. How many hits for Devers this weekend at Fenway against the Orioles?

Matz: Five. But expect Devers -- who's 8-for-16 on stolen bases and is tied for the league lead in times caught stealing -- to get thrown out at least once. So it'll feel more like four.

Miller: Leading the league in hits, only 10 points behind the league's best batting average, after hitting .240 last year. What a breakout for Devers. I want to say he'll have six, which is generous -- but then, so are the Orioles' pitchers. Seven.

Schoenfield: Short story. I'm in this fantasy league. No money, we just play for fun and ego. I had Devers on my team, but at a high salary given his mediocre 2018 production. I cut him in the offseason, hoping to bring him back at a lower salary. I still saw some potential there given his age, and the Red Sox really felt he was making some positive adjustments down the stretch last year. Anyway, I got outbid for him in the auction. Oops. But nobody could have expected this kind of season. I'll go with six hits.

Each week, we ask our panelists to choose one hitter they think will hit the most home runs and one pitcher they think will record the most strikeouts in the coming weekend. Panelists can pick a player only once for the season. We'll keep a running tally -- and invite you to play along at home.