ATLANTA -- Shocked. That was the feeling in both dugouts during the moments that produced one of October's biggest surprises ever, especially in an elimination game.

The St. Louis Cardinals scored 10 runs in the first inning against pitchers Mike Foltynewicz, Max Fried and a stunned Atlanta Braves team to essentially win the deciding Game 5 of the National League Division Series over the course of 26 minutes Wednesday.

Inside the winning clubhouse after the game, as champagne was popped and beer was poured, the victors relived an inning they will not soon forget.

Here is how they recalled the key moments:

Dexter Fowler leads off with a walk

The third-year Cardinals outfielder nearly struck out to begin the game, barely fouling off a 1-2 pitch.

"Did I?" Fowler said with a smile while pulling down his champagne goggles. "That was so long ago, I don't even remember."

"Dex just fouled it off," Braves manager Brian Snitker said. "He had a heck of an at-bat to open the game."

Kolten Wong sacrifice bunts on his own

Out of respect to Foltynewicz, Wong and the Cardinals began thinking about scratching across a single run -- something they couldn't do against him across seven innings in their Game 2 loss.

Surprise in the Cardinals dugout, and at first base, turned into applause when Wong got the bunt down easily, moving Fowler to second base. 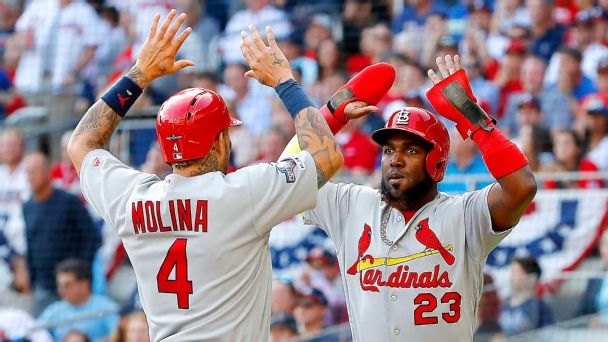 Records set in the Cardinals' 10-run first inning on Wednesday:

• Most runs in a first inning in postseason history

• Tied for most runs in any inning in postseason history

• First team with 0 HR in a 10-run postseason inning

• The Cardinals became the third team ever to have 9 different players score a run in a winner-take-all game (Pirates in 1960 World Series, Cardinals in 1934 World Series) -- and they did it in the first inning.

• The Cardinals scored 10 runs in their first trip to the plate Wednesday. The Twins scored seven runs across their 27 trips to the plate in the ALDS against the Yankees.

"I was on first and saw him square around and was like, 'OK, that's fine,'" Fowler said. "We knew we had to put some runs up to get the crowd out of it early."

St. Louis manager Mike Shildt was as surprised as anyone. "That's not a called play," the Cardinals manager said. "He has a chance to get him over and maybe get a hit. ... You play the game right, good things happen."

Said pitcher Adam Wainwright: "We were thinking, all right, now he's in scoring position. We got 3, 4 [hitters] coming up, a couple guys who have been swinging the bat well. Let's get that run across for Jack [Flaherty]. That might be enough for him."

Flaherty, the Cardinals' 23-year-old ace, would end up getting more than enough. The out Wong made on the sacrifice bunt would be the only one Foltynewicz would get and the last one St. Louis made for quite some time. The floodgates were not quite open yet -- but the Braves had begun taking on water.

After first baseman Paul Goldschmidt reached on an infield single, the Cardinals had men on first and third with one out. It was still a scoreless game.

"We know what kind of a pitcher Foltynewicz is and what he did to us last time and the way this series has been," Goldschmidt said. "We wanted to get on the board early."

"That was an unbelievable hit," teammate Jose Martinez said.

Next, catcher Yadier Molina hit a hard ground ball to Freddie Freeman at first base. Freeman booted it for just his seventh error in his 163rd game played this season.

"I hit the ball hard," Molina said. "I got lucky that Freeman missed it."

From the wild-card game through the World Series, we've got it all covered. Complete coverage

"I knew we might have him on the ropes," Carpenter said. "I'm just trying to take a good AB and extend the inning. It felt like we blinked and it was 10. It happened so fast."

The runs would come fast and furious after that walk, thanks to three extra-base hits to come, as the inning really began to get away from Foltynewicz and the Braves.

"I was just trying to get him over the plate," Edman said. "I didn't want to chase him."

Foltynewicz would end his season by intentionally walking the No. 8 hitter, Paul DeJong, before Snitker came out to get him. The Braves' skipper called on Fried to end the onslaught, but it was far from over.

"I think it was more just shocked than anything," Braves third baseman Josh Donaldson said. "You don't expect something like that to happen, especially with how well we've been playing all season."

Fried had been so key for the Braves in the first three games, but he started his outing off on the wrong foot by walking his former high school teammate and St. Louis' starting pitcher.

"I'm laughing because Max is up there," Flaherty recalls of walking to the plate. "I'm trying to keep a straight face. I looked up into the stands and saw my mom, which was great. She was smiling and all excited. I didn't expect [to face] Max.

"I saw our buddy was talking about it on Twitter. It'll be brought up in the offseason for sure."

"One out, bases loaded, I'm just trying to put something into the outfield," Fowler said.

You often hear people in the game talk about how it all slows down on the field, but in the opposing dugout, it was now feeling as if things were going way too fast.

"I don't know that I've seen that many guys hit in the first inning that quick in my entire life," Snitker said. "I don't know. It wasn't how we drew it up. I know that. I don't know. That thing just kept rolling and we couldn't stop it."

After Goldschmidt lined out, this last run was just for good measure, perhaps to underscore how awful an inning it was for Atlanta. Molina then mercifully grounded out to third to end the frame.

The Cardinals -- ready for a close game and willing to play small ball -- were left just as stunned as the Braves.

Said Goldschmidt: "That's not something you expect, but you're trying to stay in the moment to get more. Keep going, keep going."

And that's what the Cardinals did, silencing a sellout crowd with a historic inning and sending home the second seed in the National League before the sun could set for the night -- or Flaherty could even take the mound. It was the first 10-run first inning in postseason history, tied for the most runs ever in any postseason inning.

"I had to come inside and get a cup of coffee because I said this is going to be a long night for them," Martinez said. "They played a good series. We had a great inning."

The next 8½ innings were simply about getting ready for that champagne celebration.

The Cardinals earned one almost as soon as the national anthem had ended.