Lotte Giants pitcher Dan Straily can't think of anything comparable from his eight years in the major leagues to the past couple of months playing in front of no fans. The worst days for attendance in both Baltimore and Miami, where Straily most recently called home while playing stateside, had far more energy than today's empty ballparks of the Korea Baseball Organization. Even the least-attended games in the minor leagues had more than zero fans in the stands.

"You can talk to the dugout from the mound," Straily said by phone between games this week against the Kiwoom Heroes at the Gocheok Sky Dome in Seoul. "You can hear everything. It was so quiet tonight inside the dome. When the home team's pitching, there's no music going. Because it's a dome, there's not even any traffic noise from outside the stadium. It's just dead silence.

"It's just awkward how quiet it gets."

While we still don't know if we'll see Major League Baseball in 2020, the KBO -- one of the few pro leagues in the world currently playing games -- tells us a lot about what it will be like for athletes when sports make their return here sans fans amid the coronavirus pandemic.

In an effort to bring at least a sense of normalcy, some Korean teams have put stuffed animals in seats, while others have used cardboard cutouts of people wearing masks. During a typical KBO game, the cheers and singing from the stands -- famously enthusiastic and tailored to individual players -- serve as colorful background noise for those on the field. In a pandemic, those same cheers and songs are left to the cheerleaders, who are streamed online for fans watching at home.

"Now at least we have, albeit it gets annoying, but we have the drums [played by the cheerleaders or piped over the PA] that don't stop usually. I'm sure that you don't even really hear those drums when you have so much crowd noise," Straily said. "Right now that's all you have sometimes."

'If there's a big situation, you almost don't realize it'

The last time LG Twins right-hander Casey Kelly played in an environment even remotely close to KBO games during this pandemic came in the early days of his professional baseball career, in minor league backfields, where audiences usually consisted entirely of players' parents and significant others. But Kelly said that walking out to the mound in Seoul's Jamsil Stadium, with its more than 25,000 empty seats, is surreal.

Kelly spent 2019 pitching for LG, so he saw first hand the rowdiness and jubilation that define KBO games. His experience in 2020 has been the opposite.

"Usually, it's the whole stadium's singing, and [now] you just hear these five women dancers screaming, and so it's a little bit different," Kelly said. "And then pitching at home, the other team doesn't have their dancers there, so they're not having any chants. When you pitch at home, it's just completely quiet."

From the North Pole to South Korea 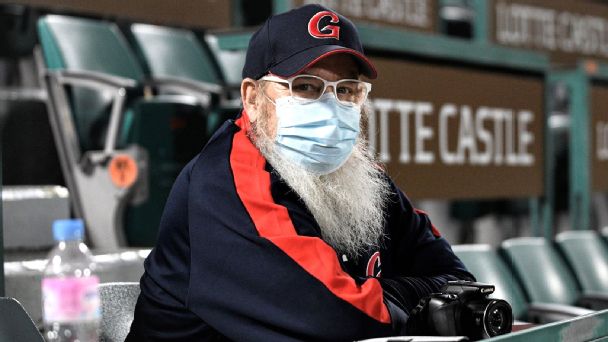 How American KBO superfan "Santa Grandfather" became one of the only people on the planet attending live baseball games. Joon Lee »

The silence makes the small things stand out. Teammates and opponents can be heard chattering from the dugouts. There's the pop and echo of the catcher's mitt after a pitch, and the crack of the bat against the ball. Some teams funnel in crowd noise to react to the play on the field, but that just isn't the same.

"I feel when the guys hit balls, it sounds so loud off the bat; and I feel like they crush every ball, because I'm not used to hearing it," Kelly said. "Usually, when there's fans in the stands, you don't really hear the balls, the bat, really that well. And here, it's usually so loud."

For a hitter such as Preston Tucker of the Kia Tigers, crowd noise often serves as an indicator of situational importance. The 29-year-old outfielder, who played for the Houston Astros, Atlanta Braves and Cincinnati Reds from 2015 to 2018 before signing with Kia in 2019, sometimes found himself losing focus during at-bats early in the season because he wasn't used to hitting without the noise.

"If there's a big situation, you almost don't realize it, it's so quiet," Tucker said. "You could be up with the bases loaded and two outs late in the game, and you don't realize the situation until you walk up and you look at the scoreboard, and you're like, 'OK, this is really important,' because you can't tell the difference without a crowd."

'You don't have anything to feed off of'

Before signing with Lotte, Straily did some research on YouTube about what it was like to play in the KBO. The league's fan culture helped sell him on making the leap to play baseball halfway around the world. It hasn't gone as he expected.

As much as the fans might miss attending games, Straily knows just how much he misses them, only now fully appreciating the symbiotic relationship between the people in the stands and the ones on the field, no matter how small or large the crowd.

"You got to find your own focus. You got to find your own will, adrenaline at times. But it's still baseball, and you're still fighting for your job and trying to provide for your family and all that kind of stuff," Straily said. "There's other motivations other than just loud crowds. But I'll tell you what, being here and playing in front of nobody really showed me how much I appreciate fans in the stands."

Kelly misses the feedback from the crowd that comes after a big strikeout. Even in preparing for games, Kelly said he has been searching for new sources of the adrenaline rush he usually gets before stepping onto the mound.

"You feed off of their energy; you feed off their excitement," Kelly said. "And to not have that this year, you had to psych yourself up in different ways, because you're not getting that feedback from the fans that are giving you that energy. It's definitely been tough. It's been noticeable. You strike the guy out, nobody's cheering. You don't have anything to feed off of."

As the temperature ticks up in South Korea, known for exceptionally humid summers, it can become even harder to maintain focus without the crowd, Tucker said.

"It keeps your adrenaline going, it keeps your attention, so that's what's making it so hard to really get locked in, especially later in the game when you're tired and it's starting to get pretty hot out too," Tucker said. "So everything's just kind of starting to drag out a little bit."

'Fans are the reason we are able to have jobs'

When he walks out of Sajik Stadium in Busan after home games, Straily encounters passionate KBO fans who simply want a taste of baseball. In some stadiums, players notice fans setting up in adjacent parking lots trying to catch a glimpse of the live action.

Recently, as the Hanwha Eagles ended their record 18-game losing streak, fans even trekked up a nearby mountain to watch and wave banners.

These die hard flag waving #HanwhaEagles fans went up to nearby Bo-moon mountain just to get a field view as the Eagles ended 18 game losing skid. These fans reminded me that it's not always about W or L and how we treasure game of ⚾️. Hope #MLB realizes that and comes back soon pic.twitter.com/8VRlD0Py1c

"Without a doubt, never realized, never thought it was even a possibility to play a game without people there," Straily said. "It just makes you realize how important they actually are for the whole experience. And not just to the viewing experience, to the playing experience, the experience for everyone at that address on any given day. The more people the merrier."

Like Straily, Tucker comes across fans after games -- and notices them during games, too.

"We get fans outside the stadium at games, behind the bleachers and everything in left and the right field, trying to cheer us on as best they can," Tucker said. "They're almost across the street. We got a couple hundred people to watch the game every night. So I know the fans are eager to come and watch, and we know they're going to be bringing their best when they finally get a chance to come in."

The unprecedented circumstances cemented for Straily what he has sometimes taken for granted during his professional career.

"It's reminded me so much that fans are the reason we are able to have jobs," Straily said. "We're able to play this game that we love in front of people that love the game just like we do."