The battle for the BMF belt and UFC 244 ended with the surprising result of a doctor's stoppage due to cuts around Nate Diaz's eye. Jorge Masvidal might have won the bout, but fans and fighters alike were left unsatisfied. Before the main event, the Johnny Walker hype train was derailed, Stephen Thompson looked like the "Wonderboy" of old, and Darren Till found a way to get back on track.

Ending robs Masvidal of his moment

Right before the beginning of Saturday night's main event, as he brought Nathan Diaz and Jorge Masvidal to the center of the Octagon, referee Dan Miragliotta said this fight would determine who is the BMF.

When I heard that, I turned to Chael Sonnen and said, "That seemed odd, right?"

I mean, at the very least, shouldn't the commission be above this BMF stuff? Of course it should.

Why do I bring this up now? Because it seems awfully deflating to see a "BMF" title fight end via doctor's stoppage. If you're going to treat this BMF gimmick as if it's a real thing, should the same rules apply? That seems confusing, right?

Of course, I'm being somewhat facetious, but could you imagine a less BMF ending than that?

I'm not suggesting the call was bad, but it sure as heck was a downer end to what was a really fun night. The truth is we've seen way worse than that cut in MMA and boxing. Heck, just recently Tyson Fury suffered what appeared to be a much deeper cut in his fight against Otto Wallin, and he went a full 12 rounds.

The decision to stop the fight was unfortunate on many levels:

1) It was anticlimactic, pure and simple.

2) It led to the fans' booing Masvidal, which didn't feel right.

3) It leaves us wondering whether Diaz, as he suggested afterward, could have turned it around.

4) It overshadowed what was a great performance from Masvidal.

Therein lies the biggest issue: Historically, Masvidal has lost the big one. He was the king of the split-decision loss. But this year, everything changed. He was on the verge of going 3-0 in one of the greatest career turnarounds in MMA history.

That was a phenomenal performance out of Masvidal. Yes, he's still 3-0, but it seems like he isn't going to get the respect he deserves for this performance, and that is really not fair.

While we're talking about reputations, how about this cruel turn of events: The week started with us celebrating the fact that the usually overly cautious New York commission didn't pull this main event after last week's drug testing drama, but in the end, it was the same overly cautious commission that put a stop to a fight that was just getting competitive.

Look, I'm no doctor. Health and safety are paramount. We can all agree on that. But questionable calls have happened in New York (see Chandler, Michael for example), and at the moment, this feels like another one of those.

Where does the BMF belt go from here -- other than into Jorge Masvidal's trophy case? I suspect I'm not alone in being keen to watch Masvidal and Diaz continue their fisticuffs once Nate's eye heals. If not, there is a group of "contenders" lurking in the alleyway, mean-mugging the world and looking ready to start something.

The UFC would have no problem booking rough-and-tumble tussles worthy of the Masvidal vs. Diaz treatment.

Dana White said this was going to be a one-off, though. If that's the way the UFC president wants to play it, fine. But let's at least allow this alternate belt to be a jumping off point for creative matchmaking outside the traditional meritocracy of the chase for championship belts. Forget about those faux interim belts, which cheapen the real ones. Next time the UFC needs a main event, and there is no champion ready to defend, look to the BMFs or some other pairing of fighters who defy conventions.

If Saturday night's main event taught us anything, it's that title fights are not the only bouts that get the blood boiling and the money flowing.

Cautiously optimistic, the Darren Till train is back on track

Eighteen months ago, when Darren Till defeated Stephen Thompson in a five-round decision in Liverpool, I wrote a story describing him as the UFC's next big star. I have to admit, watching his performance on Saturday really reminded me of that night in May 2018 against Wonderboy.

For the record, this was not Till's best performance. Not even close. I sensed some hesitation in him, and I think he's still adjusting to a new weight class. There's also, of course, the fact that he didn't make it to New York until Thursday afternoon because of visa issues. I've seen better versions of Till. But when you take all the circumstances together, I consider this one of the more important performances of his career. 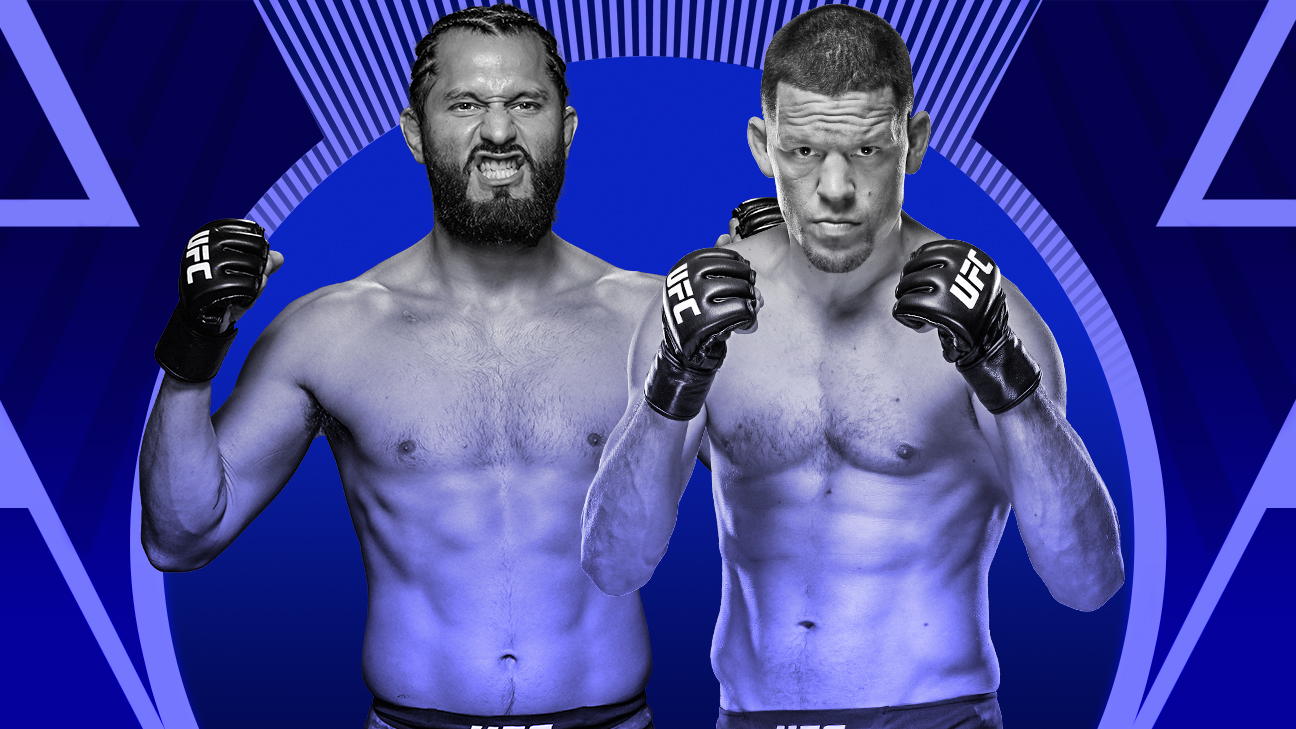 Every fight from UFC 244: Masvidal vs. Diaz is available to watch on ESPN+. Note: You must have purchased the UFC 244 PPV in order to watch replays from that portion of the night.

His coach, Colin Heron, told me that Till admitted to being slightly nervous in the locker room. One can imagine why. He was finished in his past two fights. He went from "the next big thing" to, potentially, "the latest example of a fighter flaming out." He was fighting a very difficult opponent, and his fight week had gone askew due to problems with his travel. Yet Till found a way to defeat Kelvin Gastelum, a 185-pound killer, who took the undefeated Israel Adesanya to the brink of defeat just six months ago.

I thought Till showed maturity and resilience, on a night when he might not have had his best stuff, against an opponent we already know is elite. I'm not saying he's a guarantee to win a UFC championship, but I think after the personal and professional challenges he has had recently, this was a return to the Till I saw in 2018. That guy is still a potential star.

Coming into UFC 244, Thompson had lost two in a row and three of his past five. At 36 years old, there was a sentiment that "Wonderboy" might have been on the wrong side of his prime. Not so by any measure, we found out Saturday.

Thompson looked brilliant in beating Vicente Luque by unanimous decision. He dominated from start to finish, looked as precise with his striking as ever, and he did a ton of damage to Luque, a pretty darn good striker in his own right. This could have been a classic "up-and-comer versus aging veteran" bout, but Thompson looked like the fresh, young face in the welterweight division. He flat-out beat up Luque, especially in the second and third rounds.

A closer look at Thompson's résumé tells a different story overall. He was beating Anthony Pettis before he got caught in his previous fight. Before that, Darren Till eked out a close decision. Thompson's most recent win before Saturday was in 2017 -- against the BMF himself, Jorge Masvidal. In two title fights with Tyron Woodley, Thompson fought the champion extremely close.

Thompson is currently ranked No. 10 among welterweights by ESPN and will likely climb those rankings. He said at the postfight news conference Saturday night that Masvidal is his inspiration because of a late-career turnaround. Perhaps "Wonderboy" will be the comeback fighter of the year in 2020, like Masvidal likely is in 2019.

Johnny Walker danced to the Octagon as though he were just following his destiny. Corey Anderson stormed the cage on a mission to let the UFC know he's still here.

Anderson, No. 6 in the ESPN light heavyweight rankings, had expressed irritation at not being in the conversation about who'll next challenge Jon Jones. On the other hand, Walker, with just three previous UFC fights, was being talked about -- by everyone. The Brazilian had made a big splash by knocking out his first three UFC foes in mere seconds.

Anderson went out on Saturday and made a bigger splash, derailing the Walker hype train in a violent way. Although known for his strong wrestling, Anderson went right at Walker's strength, hurting him early in a standup exchange. From there, he never let up, battering the Brazilian around the cage before finishing him with a thunderous right hand.

Did Anderson leave a stronger impression than fellow contender Dominick Reyes did two weeks ago with his KO of former middleweight champ Chris Weidman? That's in the eye of the beholder. I think Anderson is the guy, but Reyes is not undeserving. The UFC has a couple of appealing options.

The promotion will have a promising future contender in Walker if he takes a lesson away from this night. When he was hurt, he didn't have the savvy to tie up Anderson and give himself time to recover. He hadn't faced that dire circumstance in the UFC. Now he has. Let's see if he can do what it takes to bring back the worm.