Draft talk has been red hot, and now that we have an NBA champ, it will get even more blistering. And one theme of draft chatter around the league is the Finals, and especially the Finals MVP. 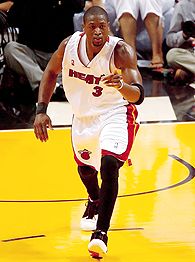 As you may have noticed, the NBA is all about trends, and that's especially true in the draft.

In last year's draft, the search was for the next athletic big man -- the next Amare Stoudemire. The year before, it was the next LeBron James. Teams have been looking for the next Shaq for over a decade. And the quest for the next MJ is akin to the search for the Holy Grail.

The theme this spring: Who's the next Dwyane Wade?

"The NBA has a bit of a herd mentality," one NBA GM told Insider. "When something works for a team, everyone tries to copy it. With the way the rules have changed, I think more and more of us are trying to find the next super guard who can take over a game with his athleticism, quickness and toughness. There is no Dwyane Wade in this draft. But there are one or two guys who can play that way."

Bill Simmons isn't happy about the trend, but NBA GMs and coaches love superstars they can trust with the ball at the end of the game. Whether it's Tim Duncan, Shaq, Kobe, Hakeem, Michael or Magic, stars still make the NBA world go 'round.

Here are the four contenders in the 2006 NBA draft. Though they are not considered to be in Wade's stratosphere, who predicted superstardom for Wade when Miami drafted him at No. 5 just three years ago?

Randy Foye, Villanova: Foye gets compared to Wade more than any other player in the draft. They are both athletic combo guards who possess a quick first step, finish strong around the basket and have a good midrange game. Both players are very tough, with a fast-running motor.

Foye is actually a little more explosive vertically, but he doesn't have the end-to-end speed of Wade. Compared to Wade at the same stage, Foye is a better 3-point shooter and appears to have a little bit better handle.