The World Championship is over, and despite all the hand-wringing over the U.S.'s third-place finish, it wasn't a bad showing. Once you consider the different rules, different ball and lack of familiarity with teammates, the U.S. did fairly well. The Americans just ran into the wrong team on the wrong night. 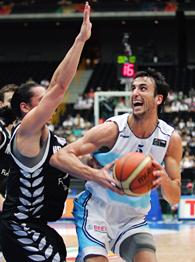 And if you think Mike Krzyzewski did a bad job, just be glad the U.S. didn't have Argentina's coach, Sergio Hernandez. With a tie game in the final seconds of the semifinal match against Spain, Hernandez decided to foul Spain's Jose Calderon -- an 84.8-percent foul shooter for Toronto last season -- rather than take his chances defending against a Spain team that had Pau Gasol on the sideline. It basically cost the Argentineans the World Championship. As an encore, Hernandez sat Manu Ginobili for the entire third quarter in the bronze medal game against the U.S.