Then 23 years old, the point guard had been a bit player in the deciding seventh game, as Parker's inability to connect from outside against the Pistons' mighty defense limited him to a 3-for-11, eight-point performance. The Spurs periodically sat Parker and used a combo of Brent Barry and Manu Ginobili to play the point in that series, and after Game 7, writers debated whether the Spurs would even bring Parker back the next year. 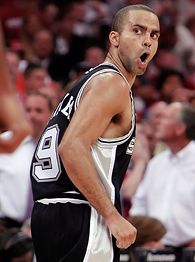