Members of our #NBArank panel are recounting the greatest NBA Finals games. First we asked five NBA writers to share their favorites. Then, Kevin Pelton started ranking his top 25 Finals games of all time, unveiling five per day.

What makes Game 6 of the 2013 NBA Finals stand out among all the Finals games I've watched since 1979 or covered since 1993 is that there wasn't just one singular moment, there wasn't just one stellar performer. There was incredible competitive drive from both the Miami Heat and the San Antonio Spurs, a throwback 30-point, 17-rebound outing by Tim Duncan matched by the 32-11-10 triple-double by LeBron James, the emotional swings of the Heat overcoming a 10-point deficit at the start of the fourth quarter to take a three-point lead with two minutes remaining, only to see the Spurs surge ahead in the final minute. 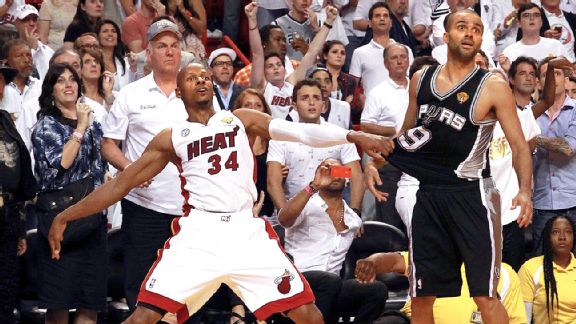 And it all led to that epic sequence near the end of regulation, which was framed by that yellow rope around the court.

The rope is what lends a surreal element to my memory of that game. I can't recall exactly when I noticed the rope. Watching the final minute on YouTube, there's a timeout with the Spurs leading by five points with 28.2 seconds left. The broadcast shows both teams' huddles, then when play resumes there are a bunch of security people in yellow shirts around the edges of the court, holding that yellow rope. It's as if they just materialized, like the Grim Reaper showing up in a cartoon when things look bleak.

The rope is the NBA's way of keeping fans and media away from the oncourt stage used to present the trophies to the champions. Because the Spurs led the series 3-2 the rope was only necessary if they won. Players on both teams noticed the rope -- at one point the holders had to scoot back to give Duncan room to inbound the ball -- and they recognized its significance.

"When they brought out the yellow rope and you know you're the one that's not going to celebrate, it hurts," Dwyane Wade told reporters afterward. "So we just kept fighting."

The rope wasn't disrespectful; it was practical. Had to be ready. The same went for Tim Frank, the NBA's senior vice president of communications, tallying media members' votes for the Finals' Most Valuable Player. He couldn't afford to wait for the game to end. Frank had just finished counting when he looked up from his seat at the scorer's table and saw Chris Bosh grab the rebound, then pass out to Ray Allen in the far corner for the 3-pointer.

Those are the moments seared in our minds, ones we've watched replayed from every angle. It's easy to forget what happened from there, the fact that the Spurs actually had the last shot of regulation (Tony Parker missed a running shot) or that Kawhi Leonard shook off the missed free throw that opened the door for Allen and scored the Spurs' first two baskets of overtime to give them the early lead. But Allen had four more points in him, Manu Ginobili made a couple of turnovers that led to that ashen look he wore at the postgame podium, and the Heat prevailed then won the series in Game 7.

Our #NBArank panel is recounting the greatest Finals games ever, culminating in Kevin Pelton's list of the all-time top 25.

And somewhere in between the rope-holders left the court. Just as I didn't see them coming, I didn't notice the moment they were gone.

A game that great doesn't end that night. At the following year's Finals, I reminisced with Bosh as he leaned against a giant photo of the rebound outside the Heat locker room. I also once got Wade going in an animated discussion about his thoughts when he saw that rope. And I always wondered whose name showed up on the most ballots that Frank counted, who would have been the Finals Most Valuable Player if Allen had missed that shot and the ropes had been lifted and Bill Russell had handed over the trophy that bears his name.

I finally learned the answer this week.

It would have been Tim Duncan.

If you want to get involved in the discussion or just follow along, #NBArank is the Twitter hashtag to use. You also can follow along with @ESPNNBA as we count down the greatest Finals games ever.