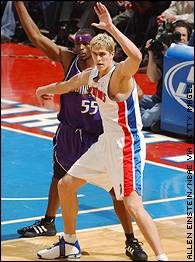 The Pistons have seen all of the above from the 2003 No. 2 overall pick in the first two weeks of the season. After two years of inactivity (and worse) under Larry Brown, Darko is finally getting a chance to contribute from Flip Saunders.

No one in Detroit, mind you, is getting too carried away. Milicic remains No. 4 in the Pistons' power rotation behind Ben Wallace, Rasheed Wallace and Antonio McDyess.

Saunders has Darko facing the basket and playing out on the floor more, whereas Brown saw the long lefty as a post prospect only. The difference is noticeable already.