Do shoes count? If not -- if you can be considered fully clothed without them -- then it's official: Santana Moss gets the strangest massage this side of Thailand. He always keeps his clothes on, minus the shoes. After he kicks the kicks, his socks, shirt and shorts all stay. As he collapses onto a massage table on this late-October evening, which he does five days a week for the magic thumbs of athletic trainer Melvyn Williams, Moss looks less like he's prepping for a rubdown and more like he's falling on the couch for a nap.

It's not that he doesn't like massages; Moss pays Williams thousands for them. And it's not that he's embarrassed about his body, the upper portion of which is perfectly sculpted and well-inked. Moss just lays facedown on the table with his basketball shorts hiked up, wedgie-like, and his legs exposed. Williams digs in, aided by a goop that hits your nose like walking into a glass wall. What's really weird? Moss' shoulders aren't touched, or even considered. Neither are his arms or neck. Moss pays Williams for one reason: To get his legs loose and jumpy so he can play receiver for the Redskins on Sundays. Moss needs his legs. So Williams kneads his legs. 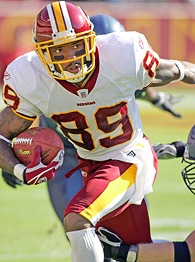 He could have used this sort of treatment with the Jets last season, when he was a walking charley horse. But for the first time in five NFL seasons, Moss is getting his body worked on every day. More to the point, after four years in New York, where he rarely lived up to the promise of his speed, Moss is working the kinks out of his career. Along with the right masseur, he's found the right team, the right schemes and the right quarterback for his laid-back personality. All at the right time.