During the playoffs, we here at numberFire have been projecting the upset odds and likely winners for each contest. Two weeks in a row, the Baltimore Ravens pulled off extraordinary upsets over the No. 1 and No. 2 seeds in the AFC, allowing LB Ray Lewis to play his final game in New Orleans in Super Bowl XLVII. The San Francisco 49ers won the NFC, as we predicted, and should have the upper hand in the Harbaugh Bowl.

Let's dive into the matchup and look at some always entertaining props for Super Bowl Sunday.

On Sunday, QB Joe Flacco and the Ravens' offense outplayed the No. 1 offense in the league -- and by a good margin. Flacco did an excellent job of taking care of the ball, throwing three touchdowns to zero interceptions on top of 240 yards passing. Heading into New Orleans, the Ravens' offense will need to play keep up once again. 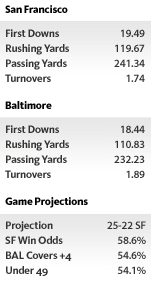 The Ravens own a league-average offense, ranking No. 13 in the NFL after adjusting for strength of opposing defenses. Flacco and the passing attack add 5.2 points per game above what a league-average offense would be expected to score. And while Ray Rice and Bernard Pierce make up the No. 5 opponent-adjusted running game in the AFC, they still cost the Ravens 22 points this season due to the fact that passing is far more efficient than running in today's NFL.