Rod Brind'Amour was the first player in NHL history to hoist the Stanley Cup in a Carolina Hurricanes jersey. He was the captain of the team's 2006 championship squad and an undisputed leader whose ferocious, competitive nature served as a catalyst.

It was that ferocity, that refusal to accept anything less than the best effort, that made Brind'Amour an appealing choice to new Hurricanes owner Tom Dundon for his coaching vacancy.

"Everything I think about the way the world should be, how people should treat other people, how they should lead, this man does it," Dundon said in announcing Brind'Amour as the franchise's 14th head coach. "He's probably the best asset we had here, and I didn't realize that when we started."

It was a surprising choice in that it was a safer choice than expected. Dundon, who purchased the Hurricanes from Peter Karmanos Jr. earlier this year, talked about outside-the-box thinking and a different approach to finding both his next general manager and head coach. In the end, he hired team president Don Waddell as GM and Brind'Amour, who had been an assistant coach with the team for seven years, as the new coach.

We spoke with Brind'Amour about that, his influences, his approach with players and how to make the Hurricanes Stanley Cup contenders again.

ESPN: Are you surprised at all that Tom went in a direction such as this? He comes in, talks about disrupting the system and ends up hiring a long-serving executive as GM and a long-serving assistant coach as head coach?

Brind'Amour: Not really. Tom's been here, like, every day. He's involved in everything. I give him credit for that. It's his money. He bought the team. A lot of guys would just walk away and let it run, in the conventional way or in the way it should be done. Who knows? I don't know if there is a right or wrong way.

But I just keep thinking that if it was me, and I had that much money, I'd want to be involved in everything too. That's his mentality. And you could see the relationship he was building with Don Waddell. A lot of great back-and-forth. And that's what it's all about, right? We put a lot of emphasis on who knows what and résumés, but at the end, it's about people. If you got good people that can work together, you got a chance.

ESPN: Do you work well with Tom?

Brind'Amour: Well, I do now, obviously. [laughs] We'll see how it goes. I come into this, and I know what's going to happen: Tom's going to want to be involved in everything. He's going to be down in the coach's office every day that he's around. And that's OK. We talked about it. I get this is how it's going to work. I think we'll be able to work together well. I'm just going to have to show him why [we shouldn't] do what he wants to do. He wants to put a guy in and play him here, and everyone knows it's not the best decision, I gotta show him why. I gotta let him know, and then he's fine. 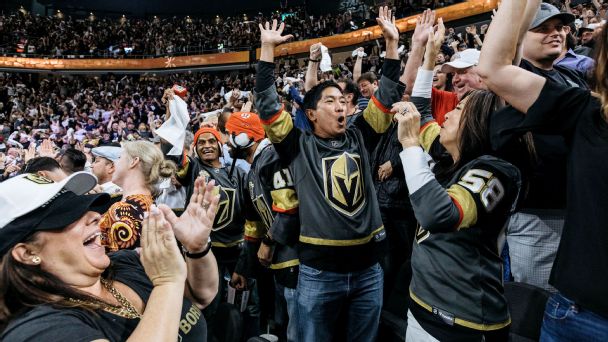 Greg Wyshynski and Emily Kaplan discuss the Capitals finally taking out the Penguins and the Golden Knights' push for the Stanley Cup. Plus, ESPN's Victoria Matiash stops by to give her view on the postseason thus far, and we hear from Patriots kicker Stephen Gostkowski about his Bruins fandom. Plus, all of your favorite segments of the week! Listen »

It's going to be fine. I know what I gotta do. And if it isn't [fine], well, we know how the story ends with every coach anyway. Obviously, we're hoping that doesn't happen soon, that I get a longer say before the inevitable.

ESPN: He said in the news conference that you were the best guy they interviewed in explaining specifics about things. That makes it seem like you'd be better than others at communicating to him the "why" of bad decisions.

Brind'Amour: This is why I appreciate what he's done. I've been on this side of the fence for seven years. I've never been involved in decisions. He comes in, and right away he wants everyone's input. So now everyone gets a say, even if he makes the final decision. Or him and Donny. I don't really know how that's going to work. But it's actually working right now. I think that's how you get better. I just enjoy being involved in it. This is going to be a team I'd like to have a voice [about]."

ESPN: Dundon said this wasn't a job you needed, even if it was a job you wanted. What made you want to become a head coach?

Brind'Amour: I've been doing this for a while now, in the assistant role for close to seven years and the last four years full-time. I just felt like in putting in the time, and the energy, and the effort, why not give it a shot? I've been in the game a long time. I feel pretty confident that I can do it. I didn't want to have regrets.

ESPN: You played for some really different head coaches: Terry Murray, Roger Neilson, Paul Maurice, Peter Laviolette. Is there one you'd most like to emulate or one who had the biggest influence on you?

Brind'Amour: It's obvious. There's really one that stands way above the rest, and that's Peter Laviolette -- without a doubt. But another guy that had an influence on me was Paul Holmgren in Philadelphia, and I only had him for a half a year when I first got there. I was a young guy, just got traded from St. Louis. He was the first guy to give me the opportunity to just play the game, and he taught me to play that way every day.

But Peter Laviolette gave me the reins as a player in Carolina, and we had a lot of success. Why would you not try to emulate that? He had a knack for getting his teams together and playing as a team. You watch it. That's the sense you get: It's not really one guy. They play together and for each other.

ESPN: He found a way to fold P.K. Subban into a homogenous team concept in Nashville.

Brind'Amour: You're reading between the lines, so there you go.

ESPN: There was a lot of talk at the news conference about changing the culture on this team, and two things you said stuck out: First, that the expectations for the franchise needed to be higher than they've been. Did you mean the target in the past was "let's try and compete for the playoffs" rather than "let's win the Cup?"

Brind'Amour: That's exactly it. This is no knock on the way it was before. They were just trying to be realistic and not set the expectations too high because if it didn't work, it would be seen as a failure. I didn't quite understand it. But I will tell you this: I don't care who you are or what you do, but if the bar is raised too high ... you might not get to it, but you're going to get close. That's just human nature. If you set it for "just make the playoffs," then you're not going to get it. Take a look where we've been every year. That's no way to go. Set the bar high. Push the guys. Expect more out of them.

ESPN: The second thing was talking about how you can notice when players cheat a little, like when they "get in the shot lane and duck out of the lane quick." Am I reading this right that you think there haven't been enough consequences for guys? That there wasn't accountability?

Brind'Amour: For sure. That's not to blame [former coach Bill Peters] because I don't think he had the power to do anything about it, you know what I mean? The difference is that Tom wants accountability. Any coach is going to love that. If you get the green light from management to do what should be done and have accountability or dependability on your team and have to make some tough decisions, and you have the backing of ownership, that's easy to do.

I played. I've been there. I know when you short-armed a pass or didn't get there for your defenseman. Those are the things I see all the time. And that won't be tolerated.

ESPN: But when you played, wasn't accountability something that needed to come from the leadership group, rather than from the coach or owner?

Brind'Amour: At some point, in a perfect world, the team does it so you don't have to do it. You don't want to let your teammate down. You're not doing it for your coach. You're doing it for each other. How do you do it? That's the million-dollar question. That's what I gotta figure out is how to tap into that and figure out how to make these guys tick. That's the art of coaching in a nutshell.

ESPN: Finally, you won a Cup in Carolina. You played more games there than anywhere else in the NHL. I know it meant a lot for Joe Sakic to go back to Colorado and try to lead the team back to glory. What does it mean for you to be able to do the same here?

Brind'Amour: Again, it's not really a job that I needed, but a job that I wanted. This organization means something to me, being here a long time and having success as a player here. I guess I owe it to this organization to do everything I can to get it back to respectability, relevancy and all that. I want to get them back on the map. We haven't been there in a long time.