Thanksgiving traditionally carries some weight for NHL teams. And not just because of the food.

During a regular 82-game schedule, consensus says that where a club sits by the final Thursday in November (essentially the quarter mark of the season) is where it will be come spring. Meaning, teams that are struggling often don't claw their way back into contention and ones that are in playoff position tend to stay there.

It's not a hard science, of course. And this season did open in mid-October, which is a little later than usual. The Thanksgiving threshold is still a good mile marker though, when the "but it's early!" argument evaporates and teams have mostly revealed what they are.

Who is happiest with what they see? We're going to find out.

A full slate of can't-miss NHL matchups awaits on Thanksgiving weekend, starting Friday afternoon across ABC, ESPN+ and Hulu. In total, there will be 27 games available on ESPN+ from Friday through Sunday (blackout restrictions apply).

Get set for puck drops with our in-depth look at standout players, intriguing storylines and even some games-within-the-game you won't want to miss.

The Rangers have already exceeded expectations this season. Boston? Not so much. The Bruins have had a halting, inconsistent start, and the absence of Tuukka Rask to hip surgery has challenged their goaltending depth considerably. New York's high-flying offense will try to take advantage. But will the bruising Bruins push back? It's the perfect Original Six matchup for your post-Thanksgiving leftovers.

What to watch for the Rangers

Artemi Panarin. New York's most electrifying playmaker is just now hitting his stride. That's good news if you're the Rangers; bad news for opponents. Panarin recently collected 11 points in nine games and rocketed back into the top 20 for league scoring. The winger has pledged to keep shooting the puck more, instead of always looking for the assist (Panarin has a team-leading 15 of those), so keep an eye out for him around the net. 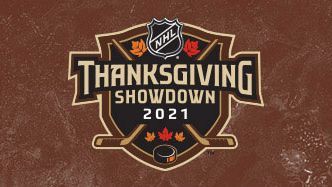 The NHL returns to ABC on Friday, plus two games on ESPN+/Hulu. In addition, from Friday through Sunday, 27 total games will be on ESPN+ (blackout restrictions apply).
Friday's schedule:
• Rangers-Bruins, 1 ET, ABC/ESPN+
• Blues-Blackhawks, 3:30 ET ESPN+/Hulu
• Devils-Predators, 6 ET, ESPN+/Hulu
• How to watch

Adam Fox. It's a good time to be Fox. He won the Norris Trophy last season at the NHL's top defenseman and on Nov. 1 signed a seven-year, $66.5 million extension to become one of the highest-paid defensemen in the league. There's no resting on his laurels for Fox though -- he's been a dominant presence on New York's blue line, while chipping in 18 points.

Igor Shesterkin. If anyone's been the Rangers' MVP this season, it's goaltender Shesterkin. He's stolen New York more than a few wins, covered all manner of defensive sins and posted a save percentage below .900 only three times in his first 13 starts. Shesterkin has been top five in every major goalie category throughout the season, continuously making his case as New York's undisputed backbone.

What to watch for the Bruins

Top-line trio. For years, it's been Brad Marchand, Patrice Bergeron and David Pastrnak attacking defenses as one of the NHL's best lines. This season has been less consistent for that trio, but it hasn't totally lost an edge.

Charlie McAvoy. It's all but certain McAvoy will earn a place in the top four on Team USA's Olympic squad for the 2022 Games in Beijing (along with Fox, coincidentally). He's been that good for a long time, and this season has required even more out of the Bruins' best defender. McAvoy's up to the task though, stabilizing Boston's blue line in a roller-coaster season while adding 12 points in 15 games. And his chemistry with partner Matt Grzelcyk is helping McAvoy blossom even more.

Power-play prowess. The Rangers' penalty kill has struggled recently, giving up seven power-play goals in the first nine games of November. That could be good news for Boston. The Bruins' own power play has been fairly effective all season, sitting top 10 in the NHL, near 20%. On a tight-checking afternoon, special teams battles can ultimately decide a winner.

There is a long history between these Central Division rivals. The Blues and Blackhawks have met 383 times and clashed in some memorable playoff series as well. The 2010s saw waves of success on both sides, including three Stanley Cup wins for Chicago and one for St. Louis.

The Blues have won the past five head-to-head matchups, most recently a hard-fought 1-0 victory earlier this season. Regardless of stats or streaks, there's always potential for fireworks when Chicago and St. Louis get down to it. Who marches out a winner? A few key performers could decide it.

What to watch for the Blues

Jordan Kyrou. If you're not familiar with Kyrou, it's time to get acquainted. He's fun to watch. The Blues center is having a breakout season offensively, with eight goals and 18 points in his first 18 games, and he's stayed consistent when the rest of St. Louis has not. In his second full NHL season, Kyrou's fit right in beside veterans like Ryan O'Reilly and David Perron as a talented playmaker only continuing to get better.

Robert Thomas. St. Louis' first-round pick (20th overall) in 2017 has been coming into his own this season after some stops and starts along the way. Thomas has been right behind Kyrou in team scoring (17 points in 18 games) and is especially strong in the faceoff dot (51.2%). It's another sign of how the 22-year-old is emerging after a long wait for fans desperate to see him flourish. At long last, Thomas looks ready to show off.

Are the Blues back? St. Louis is a little more fragile now than when it last faced Chicago. Somehow, the Blues went from earning a point in eight of their first 10 games to losing six of their next eight, hitting bottom in a 3-2 defeat against the lowly Arizona Coyotes. St. Louis has been wobbly all around, but who doesn't love a comeback? The Blues recently bested Vegas in commanding fashion, and seemed to recapture some of that early-season swagger. With a crowded field atop the Central standings -- as few as four points have been separating the top five teams -- can the Blues really waste time figuring themselves out?

What to watch for the Blackhawks

Patrick Kane and Seth Jones. They're first-time teammates in Chicago this season and Kane and Jones have already been named (along with Auston Matthews) to the U.S. Olympic team in Beijing. They've also been sitting one-two in scoring for the Blackhawks (17 points for Kane, 15 for Jones) in what's been a difficult season, to say the least. But big stages and big games bring out the best in players like them. A marquee holiday matchup is exactly where they're bound to shine.

Alex DeBrincat. It's hard to miss DeBrincat. He's usually the one putting a puck in the net. Riding shotgun with Kane on Chicago's top line, DeBrincat scored 11 goals through 19 games (nearly double what Kane and Brandon Hagel, tied as the Blackhawks second-highest goal scorers, have managed) and he shows no signs of slowing. DeBrincat has continuously dispelled any myth that smaller players (he's 5-foot-7) can't thrive in the NHL by being absolutely electrifying on the ice.

King of Chicago. The Blackhawks have undergone serious change this season already. Stan Bowman resigned as GM following an investigation into Kyle Beach's sexual misconduct allegations against the Blackhawks. Then, amid a 1-9-2 start, Jeremy Colliton was fired as head coach. Chicago promoted Derek King from behind the bench, and the Blackhawks got a much-needed boost. Under King's leadership, Chicago is 5-2-0 and winning tight games that could previously throw them off balance. Now is the time to keep it going and see if they can't salvage something positive in the season remaining.

The Devils and Predators don't share an Original Six pedigree. There's no long-standing rivalry; this game will be only the 20th time they've ever played one another.

What these teams do have in common though are exciting rosters. The star players in each lineup are clicking, whether through dominant scoring runs, great goaltending, or a showcase of top-tier defense. In short, it's the perfect time to see New Jersey and Nashville under the lights.

What to watch for the Devils

Dawson Mercer. Say hello to the Devils' newest star. Mercer is the 20-year-old rookie who led the team in scoring through 16 games, with six goals and 12 points to firmly position himself near the front of this season's Calder Trophy race. Mercer produces with a confidence far beyond his years, allowing him to drive play and show off the high-end skill set that is captivating fans. It's hard to take your eyes off him.

This season will include 103 exclusive regular-season games across ESPN, ESPN+, Hulu and ABC, and more than 1,000 out-of-market games will be available on ESPN+.
• How to watch
• Subscribe to ESPN+
• Stream the NHL on ESPN

Blue-line battle: Dougie Hamilton. When Hamilton was the big fish of free agency last summer, he had a pick of where to land. It was the Devils who reeled him in, with the promise of bright young talent and a squad motivated to compete. Hamilton has only gotten New Jersey closer to realizing its potential. He's a true offensive defenseman (five goals and 10 points in 13 games), reliable in every situation and he chews up big minutes (22 minutes of ice time per game on average). Hamilton has been as good as advertised in elevating the Devils' blue line.

Glowing goalie tandem. There's a reason Mackenzie Blackwood is on the long list of goaltenders being considered for Canada's Olympic team. So, when the Devils lost their starter to a month-long heel injury, understandable concern set in over the team's netminding. Enter veteran Jonathan Bernier. He's compiled a 4-2-1 record and .916 save percentage filling in for Blackwood, keeping the Devils at a manageable goals-against average on the season. When Blackwood returned, he was off and running through the next five games at 3-1-1 with a .921 save percentage. There's no doubt that the Predators will have to work for their goals, regardless of who's in net for New Jersey.

What to watch for the Predators

Matt Duchene. It's been years since Duchene played this well. Seriously. The Predators' leading scorer already had 12 goals through 18 games and recorded three-point nights on three different occasions in that span. One of those outings was a hat trick for Duchene -- his first in a decade -- and he tallied all three goals in less than 10 minutes. So, yes, Duchene is having a moment, and it's everything Nashville has needed in its strong start.

Blue-line battle: Roman Josi. Few defensemen can generate offense like Josi. Unless, of course, you're Dougie Hamilton. It makes for a compelling game-within-the-game, to see which of these two elite defenders come out with the upper hand. Josi is having another terrific individual season of his own, notching six goals and 17 points through 18 games, while averaging over 25 minutes of ice time per game. He's always a factor for Nashville, but this season feels quite like the 2019-20 campaign that earned Josi his Norris Trophy. Can he rise even higher now?

Special teams slant. Some words of advice for the Devils: Stay out of the penalty box. If not, the Predators' power play will make you pay. Nashville has been top five on the man advantage this season and recently tallied four power-play goals in as many games. And while we're at it, Nashville is best advised to play it safe, too. As good as their power play is, the Predators' penalty kill is equally poor and sitting in the bottom third in the NHL. That could make for some heart-pounding hockey -- at both ends -- if penalties add up. Because even with goaltender Juuse Saros standing tall for Nashville this season (.920 save percentage, 2.43 goals-against average through 18 games), the Predators have been abysmal short-handed. Whether that lasts, we'll watch and see.