There's only one more frontier left for distance runner Shalane Flanagan, and, like any intelligent explorer, she knows the map she's drawn in her mind will take her only so far.

"I already have an arsenal of tough talks to give myself, because I know I'm going to need them,'' said Flanagan, the 2008 Olympic bronze medalist in the 10,000-meter event, who will make her much-anticipated marathon debut Sunday in New York City. 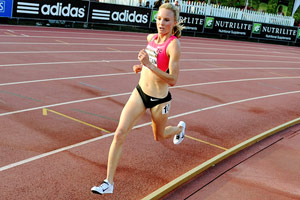 "I've got so much to learn. There are so many things I probably won't do right, but hopefully I'll get the jitters out.''

Flanagan, 29, can draw some inspiration from recent history. The top three times logged by an American woman racing in her first marathon have been set in New York: Kara Goucher (2 hours, 25 minutes, 53 seconds in 2008); Deena Kastor (2:26:58 in 2001) and Marla Runyan (2:27:10 in 2002). This despite the fact that the course is not fast compared to other crown jewels of the circuit, like London or Chicago, and favors tacticians, which would in turn seem to favor experienced runners.

That's precisely why Flanagan chose this venue -- to "take the clock out of the equation,'' as she put it, and calibrate her own routinely high expectations in a different way. "I want to focus on beating the people ahead of me,'' she said. "It's all about trying to make the podium.''

Several top Americans, including Kastor and Goucher, and three-time winner Paula Radcliffe of Great Britain aren't running in New York, but the field remains deep with competitors from Africa and Europe. If anyone has a shot to challenge out of the box, it could be Flanagan, who currently holds U.S. indoor records in the 3,000- and 5,000-meter events, as well as the outdoor 10,000. Her strong psyche and sunny appearance have made her a burgeoning star and landed her on magazine covers, including the most recent Runner's World.

"Making the transition from the track to the marathon isn't automatic, but it's not unprecedented, either,'' Runner's World editor-in-chief David Willey said. "She has the pedigree. She has the speed and the fortitude.

"She had food poisoning the night before the finals of the 10,000 and was deathly ill. Her coach encouraged her to back out and save her strength for the 5,000, but she went out and won the bronze medal. She's tough -- really a battler.''

Flanagan, a native of Marblehead, Mass., starred at the University of North Carolina and now is based in Portland, Ore., with coach Jerry Schumacher and training partners Tim Nelson of the U.S. and Simon Bairu of Canada, both of whom also are running in New York.

Flanagan prepared for this weekend by running two half-marathons in 2010. After the second one, in June in Philadelphia, she took the train to New York and previewed the course with the help of the New York Road Runners, which owns and organizes the race.

NYRR president and CEO Mary Wittenberg said Flanagan has been earmarked for greatness since her high school days. Like many others, she is keenly interested in how Flanagan will handle decision-making in the latter part of the race, especially if an aggressive contender like Kenya's Mary Keitany were to try to break away from the lead pack.

"She knows that on a good day, she can win this race,'' Wittenberg said of Flanagan. "She also knows that no debutante has won since '94 [Tegla Loroupe of Kenya] … but success for her in this race goes beyond winning.''

Indeed, Flanagan hopes her experience in New York will help her decide whether she should train for the marathon leading into the 2012 Summer Games, stick with the 10,000 or, in what she said is the least likely scenario, go for both. "I'll see where the marathon takes me -- I'll see if I enjoy it,'' Flanagan said.