Joe Papp, the former cyclist whose online marketing of performance-enhancing substances enmeshed several professional and amateur riders in doping cases, had his own sentencing on federal drug charges delayed a third time. 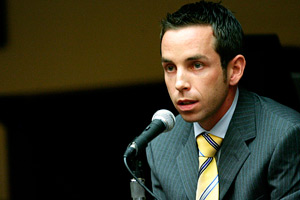 Originally scheduled for June 2010, Papp's sentencing was postponed until last September and then until Jan. 21 in U.S. District Court in Pittsburgh. A new date has been set for May 20, which would be 15 months after Papp pleaded guilty to two counts of conspiracy to sell human growth hormone and erythropoietin. He faces up to 10 years in prison.

The facts of Papp's case and the plea agreement are sealed. He has cooperated with the U.S. Anti-Doping Agency's investigation of several of his former clients, the majority of whom were amateurs. Several riders have been suspended for their illicit purchases and some cases are yet to be resolved.

Papp was unknown to most U.S. cycling fans until he testified about the use of testosterone in the peloton at Floyd Landis' May 2007 arbitration hearing in which Landis unsuccessfully sought to overturn the results of the positive drug test that cost him his 2006 Tour de France title. Several months later, federal agents seized evidence indicating that Papp acted as a middleman for a Chinese supplier of EPO, selling it to more than 180 customers via a website called eposino.com from September 2006 to September 2007.