Young cyclists will rule roads in 2011

When last year's cycling season opened, we were eagerly looking toward Lance Armstrong's final Tour de France, wondering how his rivalry with Alberto Contador would work out. As the 2011 season begins, we're still wondering a bit about exactly how the 2010 season worked out.

For one thing, we still don't know who is the official winner of last year's Tour because Contador tested positive for very low levels of clenbuterol. The positive test wasn't revealed until weeks after the Tour. Contador claimed it was the result of eating tainted meat (hasn't that happened to all of us?), and we still don't know whether he will keep his title or receive a two-year ban. Meanwhile, Armstrong had a terrible Tour de France, and just how rough a year it was off the bike depends on the continuing federal doping investigation. (I loved the Cycle Sport magazine line about Armstrong retiring to spend more time with his lawyers.) 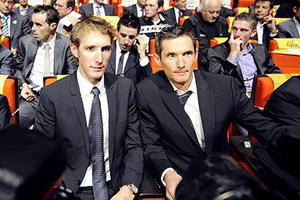 Lionel Bonaventure/AFP/Getty ImagesBrothers Andy and Frank Schleck will ride for the new Luxembourg-based Leopard-Trek team in 2011.

This week's season-opening Tour Down Under in Australia is Armstrong's final scheduled international race, and May's Tour of California is his last planned professional road race. With Armstrong's career ending and Contador's up in the air, this will be the year to focus attention on other riders, specifically the ones 25 years old and under.

"It will be a clash of the youngsters, that's for sure," Versus announcer Phil Liggett said of this season. "We'll see the arrival of Andy Schleck."

Schleck, 25, won the best young rider jersey at the Tour in 2008, 2009 and 2010, and depending on the Contador case he could find himself with the 2010 yellow jersey. Schleck finished second to Contador for the second consecutive Tour last year. He lost the jersey after his chain slipped off during an attack on Stage 15. That won him a lot of sympathy and fans, though Liggett fails to see what the fuss is about.

"It's a bike race; we're getting silly about this," Liggett said from Australia. "Talking to a lot of the riders, they feel the same way. It was pilot error. He dropped the chain. It fell off. It's his fault. Contador didn't know what was happening at the time. If you look back at it, Schleck lost the Tour in the prologue when he lost 42 seconds to Contador."

Since then, Andy Schleck and older brother, Frank, have formed the Luxembourg-based Leopard-Trek team with some of the sport's biggest names (including Fabian Cancellara and Jens Voigt). The team's performance will be one of 2011's biggest stories.

Neither Schleck is at the Tour Down Under this week, but HTC-Highroad's Mark Cavendish is. The top sprinter in the world, Cavendish, 25, has won 15 Tour stages and won the 2009 Milan San Remo. He'll be challenged in the sprints in Australia by former HTC teammate Andre Greipel (now with Omega Pharma-Lotto) and Garmin-Cervelo's Tyler Farrar, 26, from Washington State.

Other young riders to watch include a familiar name -- 20-year-old Taylor Phinney, the kid with the great DNA who will be riding for BMC. He is the son of former pro Davis Phinney and gold medal-winning cyclist/speedskater Connie Carpenter.

"He'll be a superstar, as well," Liggett said. "He'll be better than his dad. There's a lot of great young talent all over the world."

That isn't surprising. Armstrong may be leaving, but he helped build cycling's popularity in America, with the rest of the world (especially Australia) keeping pace with its own stars.

"It's amazing the popularity of the sport now," Liggett said. "Everyone wants to ride a bike. Maybe as you get older, you believe you'll die if you don't stay fit, so we're getting on bikes."