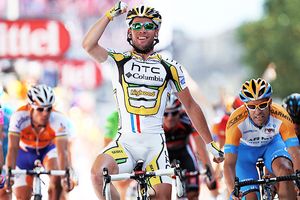 Used to be we had to wait until much later in the year to find out which cycling teams were getting invited to the Big Spin in July, but ASO, the sports conglomerate that owns the Tour de France, got it out of the way today. Eighteen teams received slots owing to the elite status conferred on them by the UCI, cycling's international governing body. Four lower-tier Pro Continental teams drew wild cards.

French cycling has been in decline for a quarter-century, but it's still startling to see just one home team in the first 18 -- a percentage remedied by the organizers, who gave all of the wild cards to French squads. Four American teams will start to equal last year's record.

There are always odd teams out for various reasons, and this year's Most Disgruntled Award goes to Spain's new Geox-TMC team. Geox's exclusion is due to the fact that the UCI denied the team elite status due to doping episodes during a previous management incarnation sponsored by Saunier-Duval. It also leaves 2008 Tour champion Carlos Sastre out in the cold.

With the beleaguered Lance Armstrong saying he'll watch from the sidelines and triple Tour winner Alberto Contador facing suspension for his positive clenbuterol test (a decision is due within the next week), there may be no former Tour winner in the 2011 field.