You've understood the rules of the tournament, you've got the squads and the format... now it's time for the matches. Welcome to Matchday One of ESPN's Battle of the Soccer Leagues in which the banter stops and the teams do the talking instead.

In Group A, the Premier League take on Liga MX and Major League Soccer face Serie A, while in Group B, Ligue 1 and La Liga square off while the Bundesliga get to tackle the Campeonato do Brasil.

Click here to see all the rules, squads, tactics and formations as well as how we pulled this competition together.

Could this be the toughest game right off the bat for the Mexican league? It might well be, as they take on the overwhelming pre-tournament favorites.

MARSHALL: Ever seen Burnley play? Nobody likes facing Sean Dyche's team, and the Premier League won't enjoy playing this Liga MX XI given that our style is comparable.

It can't be all about defending here, but there does need to be a solidity at the back. The partnership of Guido Pizarro and Rafael Carioca in central midfield will be key in shielding the defense, although I will admit that the back four isn't the strongest section of the team. However, if it does get to the point where the Premier League side is creating chances, "San" Memo Ochoa will be there to perform miracles. The Club America keeper will wear the armband for this opener, and everyone knows he rises to the occasion (see the 2014 and 2018 World Cups). 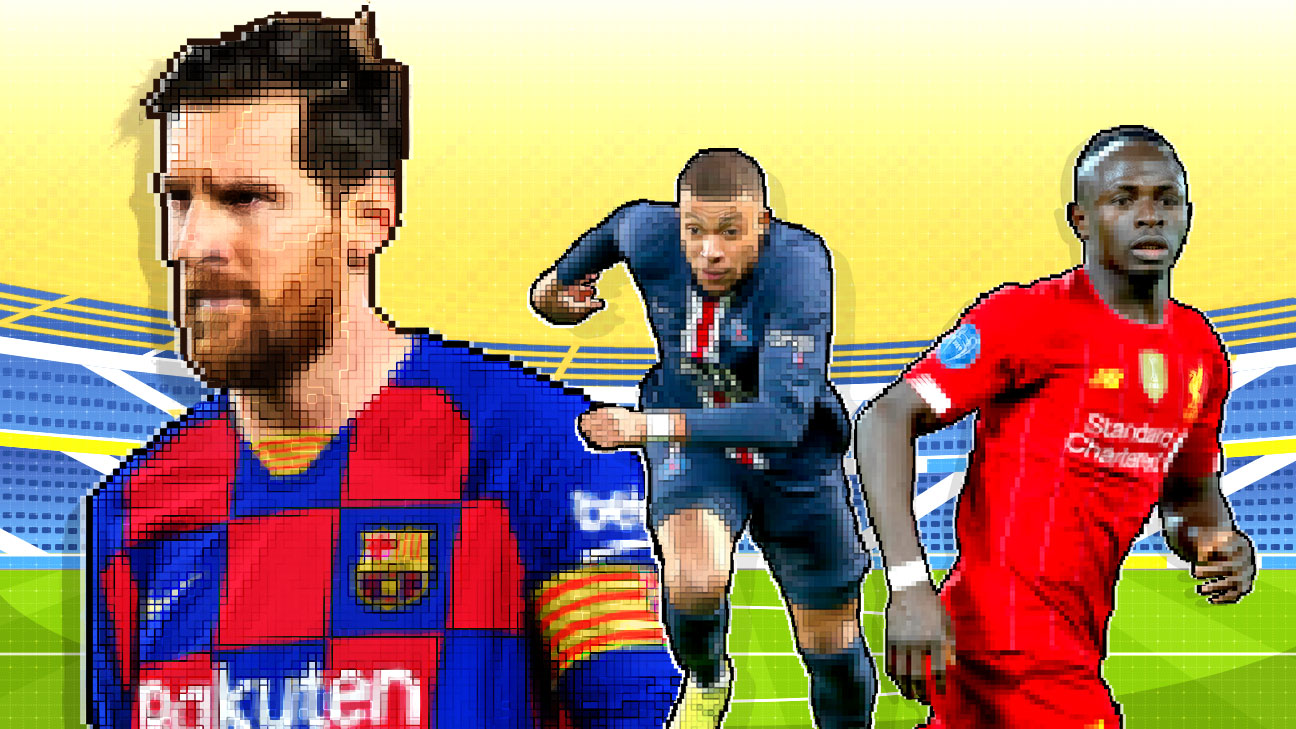 At the other end, Liga MX will get the ball forward as quickly as possible, hopefully via wingers Roberto Alvarado and Enner Valencia, the latter who is being given a shot at revenge after failing in the Premier League at West Ham and Everton. If we can get the ball into the box early as planned, the strike-partnership of Andre-Pierre Gignac and Rogelio Funes Mori can cause problems for any defense. Also, keep an eye out for those set pieces: Pablo Aguilar, Oscar Murillo, Valencia, Gignac and Funes Mori are all good in the air.

OGDEN: I picked the best players in my squad and then worried about the formation. Tactics don't win games, players do; if you have the best players, they usually negate the tactics of less able opponents. So this team speaks for itself in terms of personnel.

N'Golo Kante may be slightly overworked at the base of midfield, but with Virgil van Dijk and Aymeric Laporte behind him, Kante should even be able to break forward and assist Kevin De Bruyne and Bruno Fernandes.

As for strikers, who else would you pick?

Battle of the Soccer Leagues: Will Prem be too much for Liga MX?

SERIE A vs. MAJOR LEAGUE SOCCER

The other two teams in Group A seem mismatched given the power of Italian calcio against the top American professional league, but as they say, this is why they play the games.

BANDINI: Call it a statement of intent... or possibly an ill-advised folly. Either way, I could not resist the temptation to give the Ronaldo/Lukaku front two a whirl. The sheer physicality of that pairing would be difficult for any defence to handle, and my perception is that the MLS will be weaker at the back than they are going forward. If those two can bully the central defenders as I expect, "Papu" Gomez and Josip Ilicic ought to find plenty of space to work their magic in behind. I like the established club connection here, with each player cutting inside onto their stronger foot.

My expectation is that our opponents will sit deep and play on the counter. We have to be wary of that, because our midfield is not the fastest, so we won't risk an excessively high line. When we have the ball, I want us to be as direct as possible: the sooner we can get the ball forward, the sooner we can put those over-matched defenders back under pressure. I'm feeling good about our options from set pieces, with Miralem Pjanic and Aleksandar Kolarov on the pitch. Sorry, Ronnie: brilliant as you are, there are some things you really don't do best.

DAVIS: The lesson of Malcolm Gladwell's "David and Goliath: Underdogs, Misfits, and the Art of Battling Giants" was that the best chance an underdog has is to make things weird. At least I think that was his point; I didn't read the book, only a couple of tweets about it. Anyway. MLS will trot out a 3-4-3, heavily skewed towards aggressive pressing and scoring goals. Surprise Serie A's finest. Outrun, outlast, hit 'em quick, get out fast. Three center-backs should do the trick on the backline. Trade Moneyball for Calvinball. Victory shall be ours, or we'll go down swinging.

Battle of the Soccer Leagues: Ronaldo leads Serie A vs. MLS

Noah Davis' MLS XI aim to begin with a flying start vs. Nicky Bandini's Serie A XI in Matchday 1.

The Spanish league has to be another of the pre-tournament favorites, but Ligue 1 has a sneaky array of talent (and we don't just mean at Paris Saint-Germain).

LAURENS: This is a tough game to start the competition with, taking on the might of La Liga. And so, we've decided to play with a narrow and quite deep 4-2-3-1 formation. The idea is to leave the ball to the Spaniards and hit them on the counter with the pace of Gelson Martins, Kylian Mbappe and Neymar, as well as Youcef Atal at right-back and Juan Bernat at left-back.

When it comes to Neymar, the Brazilian superstar will be keen to show La Liga players that he is still one of the best in the world. My team will rely heavily on him to generate attacks. With Thiago Mendes and Tiemoue Bakayoko, we will have a strong pair of defensive midfielders, capable of stopping Lionel Messi & Co. in the centre of the pitch.

Wissam Ben Yedder, playing off Mbappe, will have a key role playing between the lines and making clever runs in behind on the counter attacks. Finally, with Ruffier in goal and Marquinhos and Denayer as centre-backs, we have a very solid foundation.

LOWE: The mister has been asked to explain his team, but what's to explain? Just look at that: class. A 4-3-3 formation, talent everywhere, touch and technique to dominate League Urgh.

There were a couple of doubts, mind you. And I have taken a slight defensive risk by leaving out Casemiro and going for a bit more of a ball player from deep with Dani Parejo (who is also excellent on set plays), with Santi Cazorla and Luka Modric alongside: just try getting the ball off hem. At full-back I went for Kieran Trippier (who said country bias, ahem?) and Yuri Berchiche, despite the temptation to use Marc Cucurella and the speed of Jesus Navas.

BRAZILIAN SERIE A vs. GERMAN BUNDESLIGA

Another David vs. Goliath match rounds out Matchday 1 as the Bundesliga takes on the Brazilian league.

HOFMAN: Bundesliga is clearly the favorite, so we must be 100% focused for this match. It will demand no mistakes in defense and we'll have to take advantage of every opportunity we get in attack. We have three excellent forwards, and the ball must go for them quickly to try and create one-on-one situations around goal.

Our game plan? High tempo and quality with the ball in our 4-3-3, and pressing to recover when we lose it. We'll use a compact block and fast recovery when shifting into a 4-1-4-1 in the defensive third. This will be one of the toughest matches for us given the talent on the other side.

MARCOTTI: I want to concede as little as possible to the Brazilian league, hence Joshua Kimmich and Axel Witsel shielding the back four. I figure they can hold them at bay and we'll grab a goal, hopefully early, at the other end, through the quickness of Jadon Sancho and Timo Werner.

The toughest call for me was deciding between Marco Reus and Kai Havertz. I like the latter's ability to serve up through-balls for Robert Lewandowski, but I think set-pieces could be key here, and Reus is better at that.

I was also unsure between Witsel and Denis Zakaria, but I figured the former gives you more going forward if we need it and, on paper, this is the most straightforward opponent we'll face. If they opt to sit deep, I have no problem letting David Alaba and Kimmich build play from deep, and I think we'll be dangerous on set pieces when Lukas Klostermann and Niklas Sule come up. Plus, of course, I can always unleash red-hot Erling Haaland from the bench.

We won't press high, but the likes of Werner, Lewandowski, Reus and Sancho will capitalise on any mistake in the opposition's build-up.

Battle of the Soccer Leagues: Bundesliga & Brasileirao square off

So there you have it: the first round of fixtures is in the books for ESPN's Battle of the Leagues!

We have some decisive results in Group A -- Premier League beating Liga MX, MLS sneaking past Serie A -- while Group B is finely poised after a pair of draws, with the Bundesliga held scoreless by the Brazilian Serie A while La Liga had to settle for a 1-1 draw with Ligue 1.

Matchday 2, releasing Wednesday, sees Noah Davis and MLS look to continue their form against Mark Ogden's Premier League in Group A, while both Nicky Bandini's Serie A and Tom Marshall's Liga MX fight to get points on the board having lost their opening-round matches.

In Group B, the Bundesliga (led by Gab Marcotti) take on Julien Laurens' Ligue 1 and Sid Lowe's La Liga side hope to get a victory against Gustavo Hofman and the Brazilian Serie A select XI.

Visit ESPN FC on Wednesday for all the highlights and analysis as we continue Battle of the Leagues!