Liverpool fans have been able to enjoy the international break, basking in the glory of an eight-point lead over Chelsea and Leicester City.

But boy are they lucky to be so far in front!

ESPN and the team led by Dr. Thomas Curran, at the London School of Economics, compile the Luck Index to examine how the Premier League would be if luck were not a factor through this season. And our latest update shows that Liverpool's lead would be slashed if they weren't so lucky, and Manchester City so unlucky.

Arsenal must have broken a mirror and walked under a ladder as they are by far the unluckiest team -- so much so they should be in the hunt for a Champions League spot. Poor Unai Emery.

The November Luck Index shows that Liverpool would have two fewer points, while Manchester City would have an extra three, and the title race would be back ON!

Rather than a gap of nine points between the two championship favourites, it would be just FOUR. 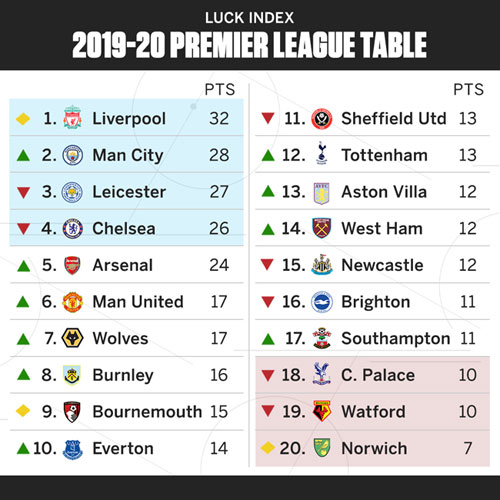 Let's start by taking the huge slice of luck Liverpool had against City in the last game before the break, when referee Michael Oliver did not give a penalty with the score at 0-0. Had Trent Alexander-Arnold been penalised for that handball, the Luck Index says that the game would have finished as a draw, rather than a Liverpool win.

City get a win for the home draw against Tottenham, when the champions did not get a penalty for a foul by Erik Lamela on Rodri.

Liverpool also lose two points from the controversial, late penalty win at home to Leicester, but are credited with a win at Manchester United after Marcus Rashford scored despite an alleged foul in the build-up by Victor Lindelof.

The unluckiest team this season have, without any doubt, been Arsenal -- costing them four more points (7) than the next unluckiest teams City and Southampton (3). The Index shows that the Gunners have lost SEVEN POINTS this season due to bad luck. And while that may only move them up one place, they would be just two behind Chelsea and four behind City. Maybe the fans are being a bit harsh on beleaguered boss Emery...

The most-recent incident for Arsenal came at home to Crystal Palace, when Sokratis' late winner was mysteriously ruled out by the VAR. And they were also denied a penalty in the loss at Sheffield United when the score was goalless.

The luckiest team this season has been Crystal Palace, benefitting to the tune of five points and six places. Without Lady Luck, the Eagles would plummet down the table into the relegation zone, below Southampton once they have had three points added to their tally.

The only team to fall as many places are Sheffield United. Chris Wilder's side sit fifth in the table, but the four points they are stripped of from the Arsenal game and the home win over Burnley (which becomes a draw) sees them tumble to 11th with a net loss of four points.

Just as lucky have been Brighton & Hove Albion. They probably feel safe, sitting up there in 11th place in the table. But that does tell their tale of luck, with a loss of four points forcing them down five places into 16th. And Newcastle are three points better off, as they should have lost at home to Wolves and drawn at Tottenham.

All in, it really does make for a thrilling relegation battle. In the real life standings, there are seven points between 11th and 19th. But that's cut to just three in the Luck Index.