With the Bundesliga and Serie A returning after short winter breaks (stream games LIVE on ESPN+ in the U.S.), New Year's weekend is a good time to soak in a bunch of storylines. So let's set the table for the days ahead, with a look at several intriguing matchups, from Manchester United vs. Aston Villa on Friday to Huesca vs. Barcelona on Sunday.

Jump to: Surprising contenders | Clash of styles | Are Leverkusen for real? | Green-apalooza| Sexiest game of the weekend | Dortmund's redemption | Challengers close in on Liverpool | Barca as Not-Barca

The general aura of Manchester United's 2020-21 season to date is one of slight disappointment. The Red Devils lost three of their first seven league matches, and despite looking spectacular in wins over both Paris Saint-Germain and RB Leipzig, they lost three of their last four Champions League group-stage matches and parachuted in to the Europa League. Despite ongoing defensive issues, however, they've gone unbeaten in their past nine Premier League matches, and they're second in the table behind Liverpool.

Villa, meanwhile, are back in the top five. Dean Smith's squad suffered through a miserable November, but racked up 11 points in five December matches. Early January offers a massive test -- at United on Friday then hosting Liverpool in the FA Cup a week later, followed by matches against Tottenham Hotspur and Everton on the 13th and 16th. Smith has used the smallest rotation in the league to date, but it'll be refreshed at the right time.

FiveThirtyEight's club ratings give Villa a 23% chance of reaching the Champions League -- up from 2% at the start of the season and 8% at the end of November -- and their statistical profile is sound. But these next three matches are enormous. 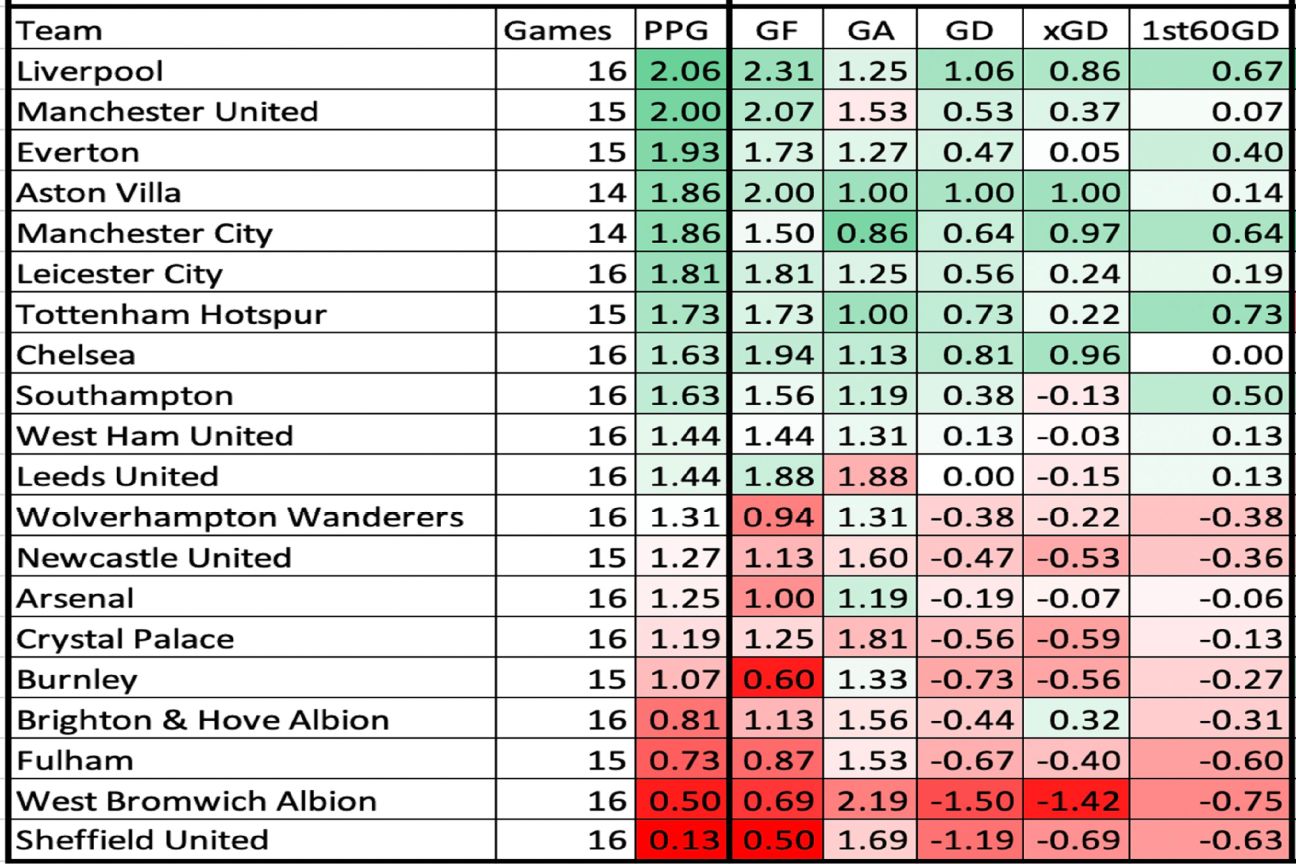 A clash of styles

It's a testament to the depth of the Premier League that even midtable teams are unique, tough outs at the moment, and it gets no more unique or tough than Marcelo Bielsa's Leeds.

Leeds force you to play their game: up-tempo (most possessions in the league), pressure-heavy and somehow both vertically minded and friendly to high possession rates. Basically, they really want to stress you out. Bielsa's side are going to take a ton of shots and risk you doing the same. When it works, it's gorgeous, as recent 5-0 and 5-2 wins over West Bromwich Albion and Newcastle United respectively can attest. But when it doesn't, it really doesn't -- they lost 6-2 to Man United recently and fell 4-1 to both Leicester City and Crystal Palace in November.

What happens when Leeds plays the team with maybe the second-strongest identity?

Jose Mourinho's Spurs have established fully Mourinho-ian ideals at this point, sacrificing possession for defensive solidity and, through Harry Kane and Son Heung-Min, some of the most potent counterattacking the league has seen in quite some time. They aren't in amazing form at the moment -- two points from their past four matches -- but they know what they are. They will have plenty of countering opportunities, but Leeds will also test their defensive structure as well as anyone can.

Like a lot of other European heavyweights, Bayern Munich have leaked a few more points than usual early this season. The eight-time defending German champs are on pace for 78.5 points in 34 matches; only twice in their title streak have they finished with fewer than 82. Two seasons ago, they managed just 78 and almost lost the title to Borussia Dortmund.

It would surprise no one if the champs found fifth gear after a short break and with Champions League play on the back burner for a while. But until they do, we will treat the Bundesliga race like an honest-to-god title fight.

Two teams in particular have stood out as contenders in this fight: RB Leipzig and Bayer Leverkusen. 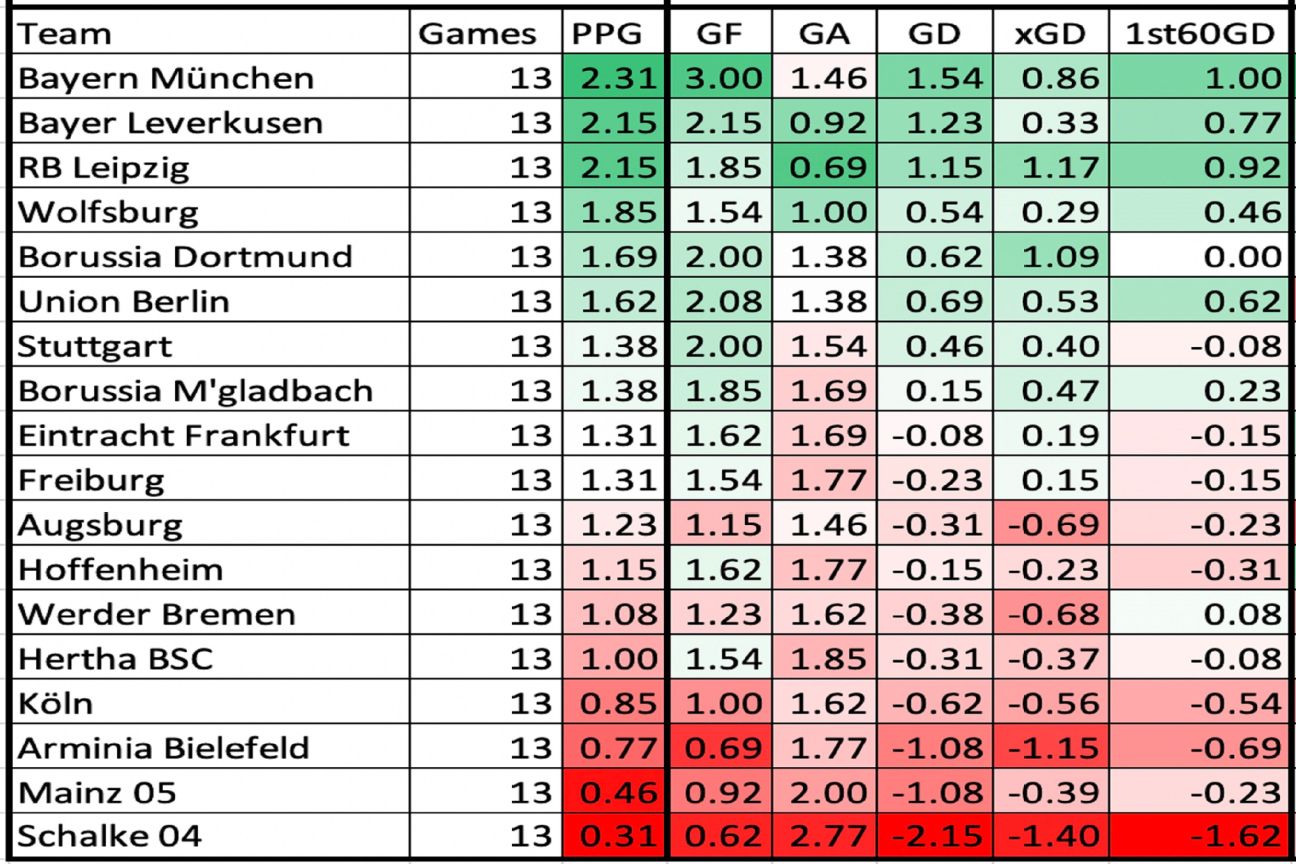 Bayern seized the league lead just before the break, prevailing 2-1 in Leverkusen with a stoppage-time winner from Robert Lewandowski. Without it, Leverkusen would have topped the table by one point.

Bayern will likely earn three points against Mainz on Sunday (11:50 a.m. ET/4:50 p.m. GMT, stream live on ESPN+), but both Leverkusen and Leipzig have tricky challenges, with the latter playing at seventh-place Stuttgart on Saturday (2:20 p.m. ET/7:20 p.m. GMT, stream live on ESPN+) and the former playing against an Eintracht Frankfurt team that has been nearly awesome, losing just twice but suffering eight draws.

This is another fun contrast-in-styles matchup, with Leverkusen playing a slower, possession-heavy match and Eintracht wanting to get the hell up the pitch when possible. Leverkusen allow few shots, but grant you some good counterattacking opportunities, while Eintracht take few shots but generate high-quality chances when they do. They will test Leverkusen's transition defense.

When ESPN+ acquired Bundesliga rights, it also acquired rights to a select number of 2. Bundesliga matches, and this week's marquee game in Germany's second tier could be of particular interest in the States.

Greuther Furth hosts a struggling St. Pauli, hoping to keep up in the race for one of two auto-promotion spots atop the league. Furth have their own brand of Moneyball going on, stocking their midfield with former big-club academy players and boasting maybe the sturdiest, most creative midfield in the league. Sturdiest and most creative of all: Julian Green. The 25-year old United States international and former World Cup goal scorer has combined 14 shots on goal with 15 chances created, and fellow midfielders Paul Seguin and Sebastian Ernst are thriving, too.

Furth beat top-division Hoffenheim last week in the DFB-Pokal: they are both dangerous and fun.

The sexiest game of the weekend

If you enjoy things like "shots" and "goals," Serie A has been an awfully attractive league of late, and not just because of the high number of penalties. The teams move pragmatically, and only a few press with any major intensity, so lots of clubs have figured out ways to create high-quality opportunities. 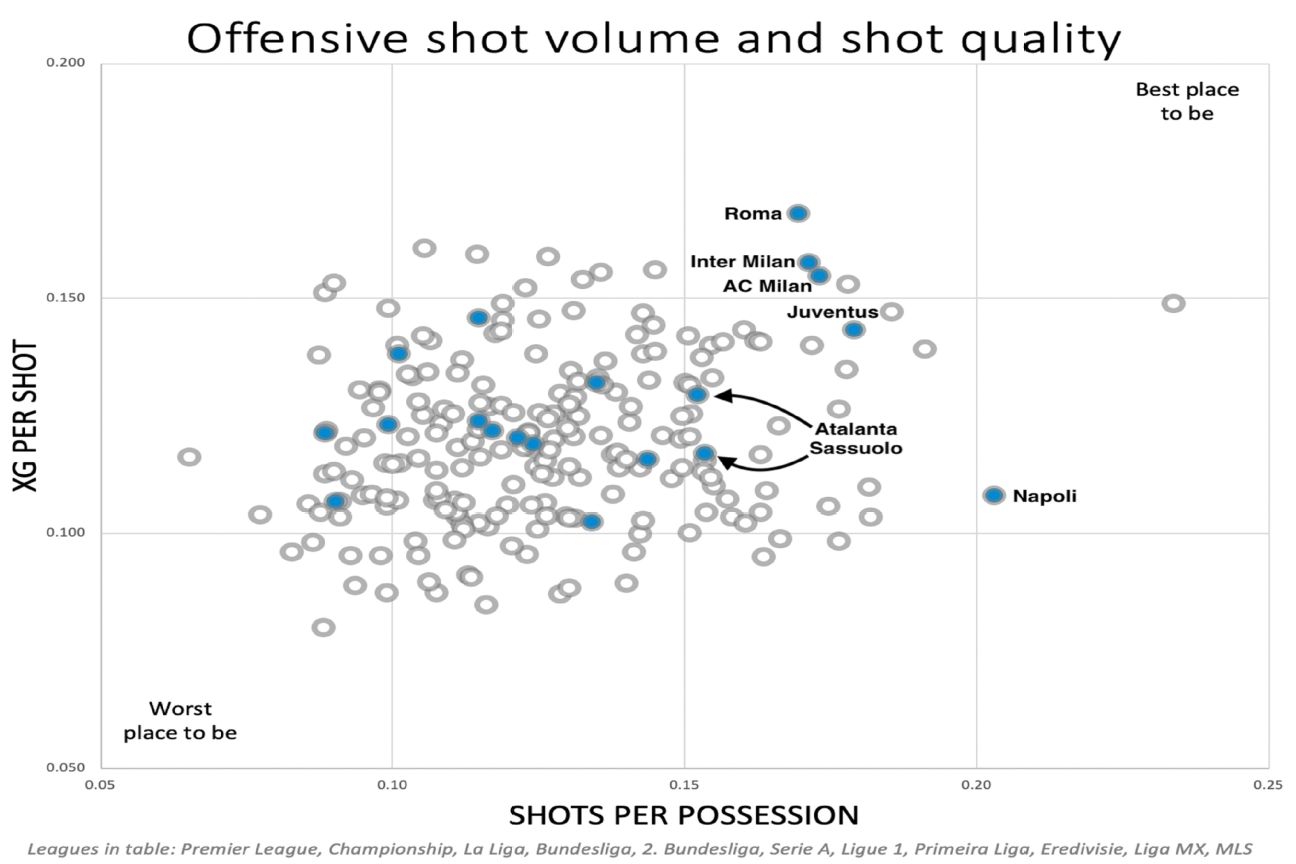 For Atalanta, that has meant a high tempo and a tilted pitch: they rank second in the league with 102.6 possessions per 90, and 55% of opponents' passes have come in their own half of the field, most in the league.

For Sassuolo, it's meant playing keep-away. Led by manager Roberto De Zerbi, the Neroverdi have the highest possession rate in the league at 59.9%. They hog the ball and create decent opportunities, and while they allow a ton of shot attempts themselves -- only Cagliari allow more shots per possession -- they don't allow any good ones (only Udinese allow lower xG/shot). Their defensive base is sound.

As they did in 2019-20, Atalanta appeared to sacrifice some points in league play while focusing on Champions League advancement, but they took eight points from their final four matches before the festive break, stomping AS Roma and drawing at Juventus in the process. They're back to within four points of the top four. Sassuolo? In the top four. They've lost only to the Milan clubs thus far. Their xG differential suggests that keeping up this pace might be awfully difficult, but De Zerbi uses all of his subs and lots of different players, and his resourcefulness has paid off so far. 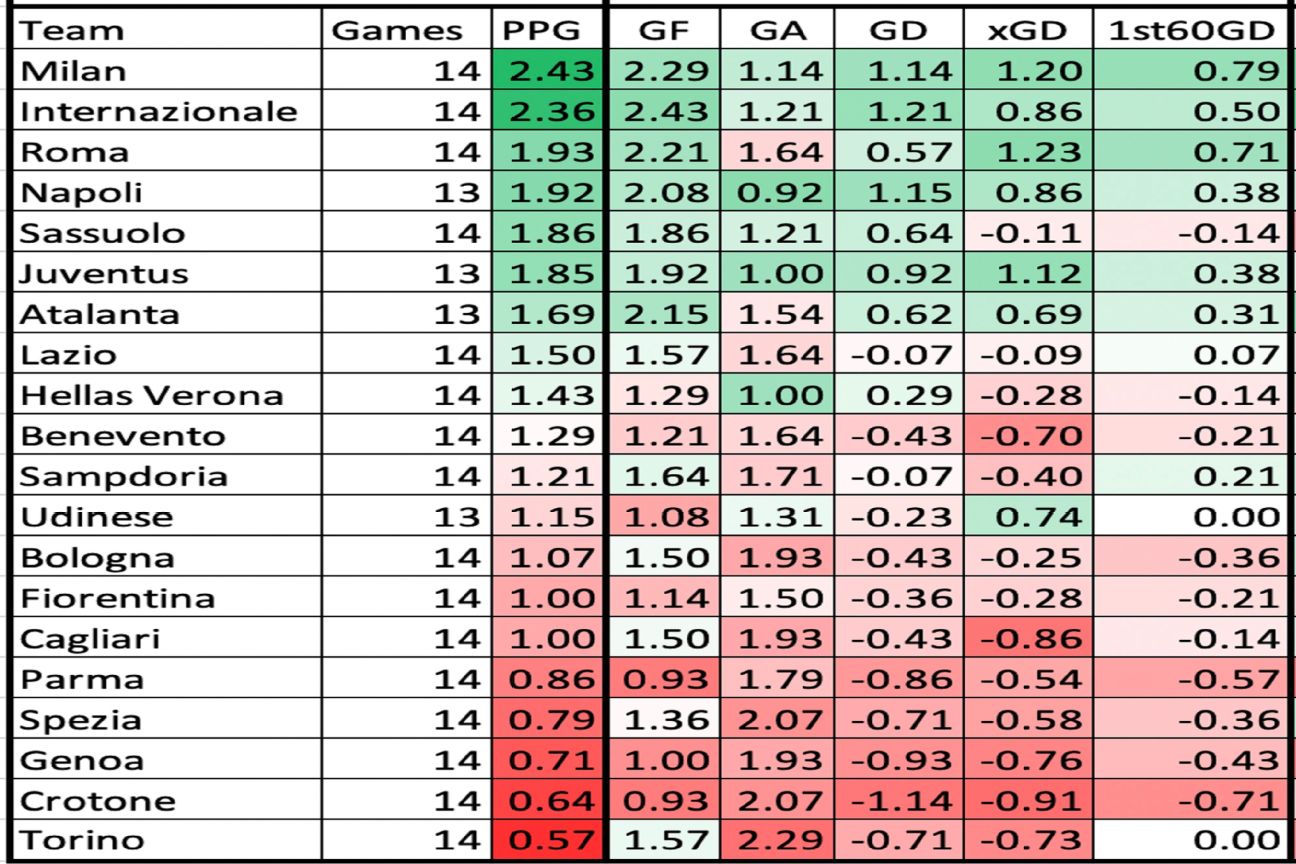 So far in 2020-21, Borussia Dortmund have done the big things right. They won their Champions League group, dropping the opener to Lazio, but taking 13 of the remaining 15 available points. In league play, meanwhile, they've generated the second-best xG differential to date (+1.09), ahead of Bayern's (+0.86) by a decent amount and behind only RB Leipzig's (+1.17). They are the most possession-heavy team in Germany at 63.7%, and they allow opponents to finish only 29% of their possessions in the attacking third (again, only Leipzig are better).

Why Jesse Marsch is 'a perfect fit' for Dortmund

Yet you have to turn expected goals into actual goals and points. In their last seven league matches of 2020, they lost four times and drew once. In four of those five blemishes, they held the xG advantage, but on Dec. 12, BVB lost to Stuttgart, 5-1 in Dortmund, and manager Lucien Favre -- upon whom the xG gods smiled in previous seasons -- got canned. Assistant Edin Terzic was named interim manager for the rest of the season.

It didn't help Favre's cause that striker Erling Haaland was on the sideline, sitting for six matches with a muscle injury. He is a one-man xG breaker -- he's scored 17 times for BVB, on just 11.3 xG, in all competitions this year. He'll supposedly be ready to roll on Sunday, and not a moment too soon: fifth-place BVB face fourth-place Wolfsburg at Signal Iduna Park. Wolfsburg are an up-tempo team that can sometimes get stretched thin on defense and give up high-quality opportunities. Haaland is a walking high-quality opportunity.

Somewhere around the fourth or fifth goal of their 7-0 pounding of Crystal Palace in mid-December, it very much felt like Liverpool were about to run away with the Premier League. The Reds had slogged through a series of injuries and setbacks and were forced to field much younger and more varied lineups, but they'd pulled ahead of the pack regardless and looked spectacular. Meanwhile, the teams that looked like their biggest challengers heading into the season -- Pep Guardiola's Manchester City and Frank Lampard's Chelsea -- were habitually dropping points. City forgot how to score goals for a month, and Chelsea combined an early run of draws with three losses in four December matches.

Will there finally be a proper title race in England?

With wins over lowly West Brom and Newcastle, Liverpool could have headed into this weekend up seven points on second-place Manchester United and up 11 on City and Chelsea. Two baffling draws later, however, they're only three up on United -- who could draw even with a win over Liverpool -- and they could be only four up on the winner of this one. (If there is a winner, or even a game, of course: the game is still hanging in the balance following a COVID-19 breakout at Man City that forced their Dec. 28 game to be postponed.)

City are increasingly scary -- the Sky Blues have pulled seven wins and three draws from their past 10 matches. They won their Champions League group with ease, and after a dreadful start are now a narrow second in Premier League xG differential. Chelsea are third, by the way, and the only reason they're seven points back is that they've averaged a dreadful and totally unsustainable 0.7 points in matches decided by 0-1 goals (five draws, two losses). That won't last.