Winning the right to host the World Cup must have been the only way this team, arguably the poorest in the history of Russian football, would get a chance to play at this tournament. The 2017 Confederations Cup at home, therefore, acted as the only real test for Russia, who stopped at a group stage after beating New Zealand but losing to Portugal and Mexico.

In total, Russia have played 19 matches since Euro 2016 and won just six (against Ghana, Romania, Hungary, New Zealand, Dinamo Moscow and Korea Republic). They haven't won since October 2017, and conceded 10 goals in four friendlies against Argentina, Spain, Brazil and France.

Is there one? That's really a tough call to make. Igor Akinfeev can still do wonders between the sticks, although he's prone to unthinkable blunders now and then. A triangle of Alan Dzagoev, Aleksandr Golovin and Fedor Smolov could produce something non-trivial in attack. Besides, Cherchesov has been trying to make his team work hard, pressing with quick transitions between defense and attack. It rarely works, but when it does it could be called this team's biggest strength.

Defence has been considered the weak link of the Russian national team for many years. When the CSKA trio of Sergey Ignashevich and the Berezutski brothers (who are still considered the best despite being 38 and 35 years old, respectively) decided to quit international football, things only got worse. After his appointment, Cherchesov started playing five at the back, but since the start of 2018 he's lost two of the regular three centre-backs (Viktor Vasin and Georgi Dzhikiya) to long-term injuries. The coach had to start looking for new partnerships all over again, but six conceded goals and a huge amount of goal-scoring opportunities for opponents in this year's two friendlies show that it hasn't been an easy task.

Fedor Smolov is probably the biggest Russian star at the moment. The 28-year-old striker took a while to transform from a talent to becoming the country's main striker. Giving up on the posh life and breaking up with a former model (Viktoriya Lopyreva, who's now one of the official World Cup ambassadors) coincided with his rise. He became the top Russian Premier League scorer in two successive seasons (20 goals in 2015-16, 18 goals in 2016-17) with FC Krasnodar, and he's currently on par with Spartak's Quincy Promes (14 goals scored each) in the hunt for a third straight golden boot in Russia.

The skillful striker, who's equally good at finishing and passing, has a dream to play for one of Europe's big clubs and may use the World Cup to convince them to take a gamble on him.

"Something needs to be done about the way Russia defend, but nearly all of the defenders Cherchesov has tested after Vasin and Dzhikiya's injuries have failed to prove their level. What we saw in the March friendlies showed that there's no light at the end of the tunnel." -- Igor Rabiner, Sport Express 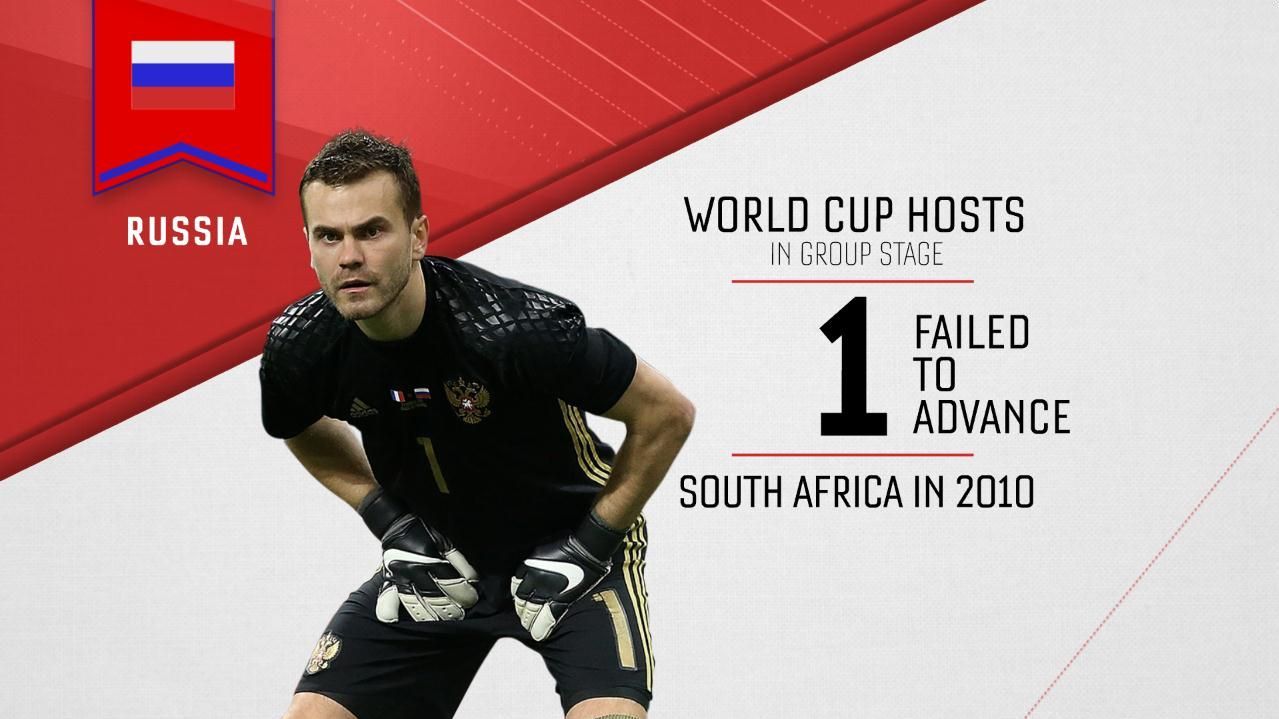 Russia were extremely lucky with the draw. So even arguably the poorest team in the country's history could still qualify for the knockout stages, which will be a first for Russia. Assuming the hosts beat Saudi Arabia in the tournament opener, much will depend on the next match against Egypt (and Mo Salah's form, obviously) and the motivation (or lack of it, if they've already qualified by that time) that Uruguay will have in the last group match.

If Russia do manage to reach last 16, playing Spain, Portugal or even Iran (Russia were lucky to avoid defeat from them in last October's home friendly) would likely be their last game of the tournament