Editor's Note: This is the third in a series of essays profiling all of the cities set to host World Cup games this summer. Eliot Rothwell visited every venue to get a sense of how preparations were going and what the mood was like ahead of the tournament.

KAZAN, Russia -- Crouched in little kiosks, street vendors offer Chak-Chak to passersby. Everywhere in the city people sit in cafes, after lunch or dinner, chomping on the little golden hazelnut and honey dish. Usually, they take it with black tea and little cubes of sugar.

It's a moment of calm used to wind down an evening out, or a brief window of tranquility in the middle of the work day. In recent years, it has become a hallmark of Kazan, one of the symbols of the city in an era of commercialized heritage and tourist boards. In Kazan's souvenir shops, you can buy themed key rings, fridge magnets and T-shirts to take home. There's even a Chak-Chak museum.

The dish is traditional in the Republic of Tatarstan, perfected over generations by Tatar families. Today, throughout Russia, it is thought of as a totem of Tatar culture. Lots of people try it on visits to the area, filling out their Instagram feeds with pictures of the dish. But in Tatarstan in general and in Kazan, the Republic's capital, Chak-Chak is a small part of local culture.

On street signs in Kazan, the Tatar language sits alongside Russian, with its adaption of the Cyrillic alphabet. Streets named after Vladimir Lenin and Karl Marx run into those dedicated to Tatar poets and literary figures like Alexander Pushkin and Hadi Taqtas. Bars, with speakers outside as well as in, blast Tatar pop and Russian rap. At the top end of Bauman Ulitsa, the long, pedestrianized street running north-west to south-east, the blue and white domes of the Kul-Sharif Mosque, high above surrounding buildings, announce the presence of Islam, the dominant religion among Tatars.

The mosque sits on a hill overlooking central Kazan. From its vantage point, you can see the river Volga. In front, brick walls encase the mosque within Kazan's Kremlin, just a couple of steps away from an Orthodox cathedral. The city is shared by ethnic Tatars and ethnic Russians, by Islam and Orthodoxy, by the Tatar language and the Russian language, by two different sets of traditions.

They coexist, without conflict, in a modern, globalized 21st-century city.

Kazan is a city at peace with itself. Ivan the Terrible, massacres, and forced "Russification" are left for grandparents -- and historians -- to debate. The old customs survive but today's young people were raised in the "New Russia." They are united by their interest in sneakers, fast food chains and rap music. 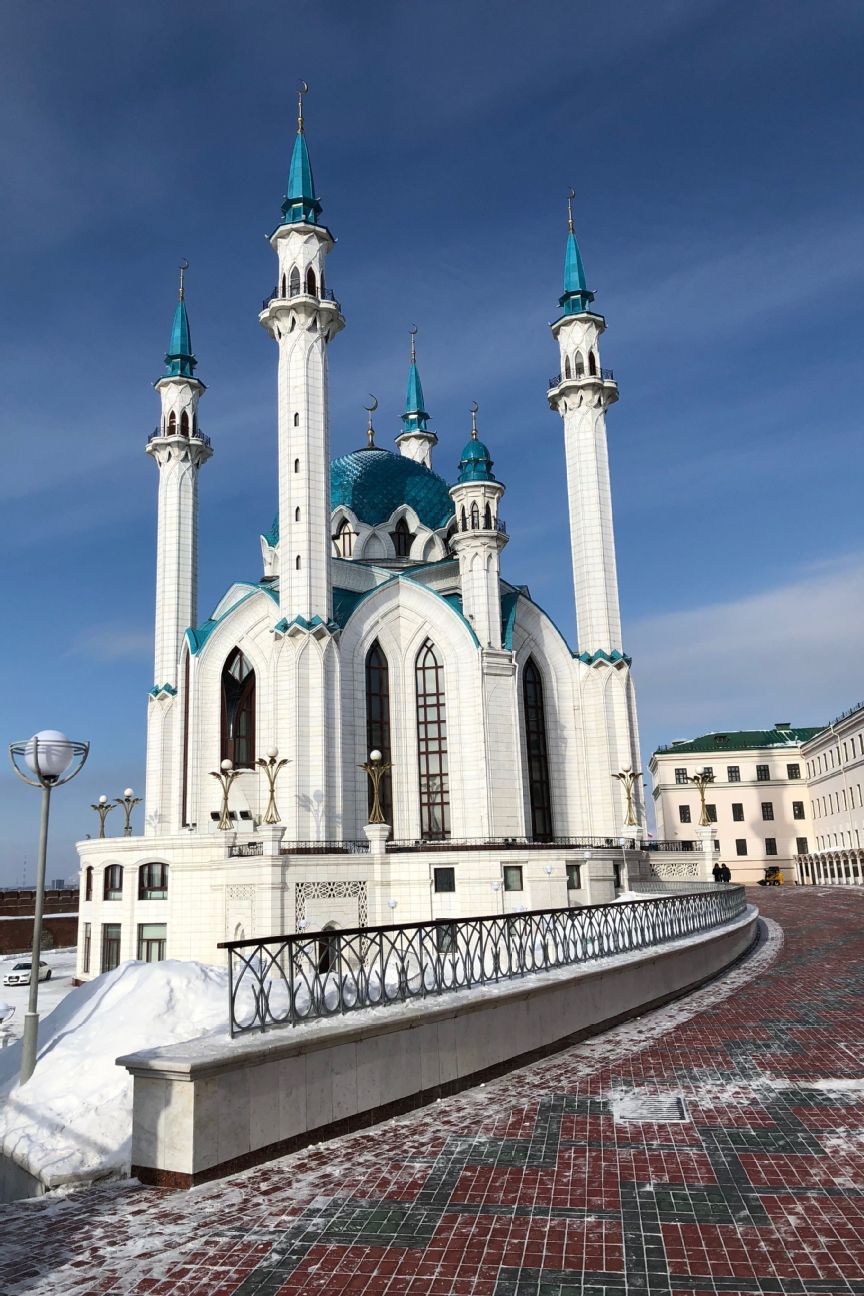 In the 1990s, Tatarstan's leaders pushed and pulled the levers of power in Moscow. They wanted more autonomy for the Republic and greater prominence for the Tatar language in schools. But there was no serious urge for independence. Today, the city's cosmopolitanism is a source of pride.

As Airat Shamilov, a journalist with the Kazan-based online newspaper Biznes Online, told ESPN, ethnic unity "is the main strength of Tatarstan," a refreshing antidote to the divisive nature of modern Western culture.

"In Tatarstan," he said, "there are many Chuvash people, Maris and Udmurts" [ethnic groups common in the region] as well as ethnic Tatars and ethnic Russians. Yuri Nurmeev, an aide to the rector of Kazan Federal University, agreed. Multiculturalism, he told ESPN, "is definitely something that makes our city special and interesting for newcomers. It is famous for its multicultural atmosphere, with Orthodox and Muslim culture and, of course, Russian and Tatar culture. There are no problems here. I don't think there has been one particular period in the Soviet or post-Soviet history that you could call a period of conflict."

During the World Cup, Kazan's multicultural atmosphere will extend to visitors from around the world. Fans of France, Australia, Iran, Spain, Poland, Colombia, South Korea and Germany will pass through, ready for a party.

In the city, they will be directed across the river from the Kul Sharif Mosque to a little patch of land jutting out into the Volga. Here, in the city's fan zone, big screens will show the football. In the middle of it, local authorities constructed a huge, bow-like installation. It was inspired by one of the theories about the origins of the word "Kazan." According to folklore, the city's name refers to a traditional melting pot used in Tatar cooking, but in the fan zone it stands as a guiding metaphor for the city and its diversity.

Down the highway from the fan zone, a short bus ride east, the Kazan Arena soon becomes visible. A huge screen on the side of the stadium advertises local events while a nearby bus stop gives information about the World Cup schedule in Russian and Tatar.

Six games will be played at the stadium: four group stage matches, one in the round of 16 and then a quarterfinal. Unlike other venues in 2018, the Kazan Arena has been ready for years, built for the 2013 World Youth Games.

As Nurmeev suggests, the games prompted the local authorities to embark on "an especially sizable development program with investment in roads, renovations, construction and general infrastructure." Since then, Kazan has become a destination for international sporting events, hosting the water sports World Cup in 2015 and the Confederations Cup in 2017. But the World Cup is the crowning achievement, the culmination of Kazan's development in the years following the Soviet Union.

The trouble, though, is what's left behind.

Kazan is a hockey town; the big event each year is when the local side, Ak Bars Kazan, reach the playoffs. In recent years, interest in Rubin Kazan has declined along with the club's fortunes. Now, they're a fairly average mid-table Russian Premier League side. Each season, they put in some impressive performances but their brand of football is largely stodgy and uninspiring. As a result, fans have turned away. The 45,000-capacity Kazan Arena is often only a third full. Even against Spartak Moscow, then league champions, the attendance was less than 15,000.

The figure of Kurban Berdyev, Rubin manager, offers some hope. He returned at the beginning of last season, from Rostov, where he'd guided the team into the Champions League for the first time in club history. Before that, he made Rubin the envy of Russia. They were Russian champions in 2008 and 2009 with a squad of unheralded Russian players and a string of smart signings from the world's lesser leagues. And, in the 2009-10 Champions League campaign, they defeated Pep Guardiola's Barcelona at the Camp Nou.

After their triumph, things stagnated. The local authorities who had sponsored the club soon lost interest. Players were spirited away, making their name at Rubin before moving onto bigger clubs and higher salaries. Berdyev grew increasingly hostile, criticising journalists and battling with the club's board. Eventually, he was sacked at a board meeting headed by the president of the Republic of Tatarstan.

Since then, relations improved and Berdyev returned. But a second miracle has yet to emerge. The teams of 2008 and 2009 remain a memory. "At the moment, Rubin are going through a complicated period and there are problems with attendances," said Shamilov, though he is hopeful that the future is brighter than the present.

"As the results get better," said Shamilov, "people will return to the stadium."

Rubin's difficulties are mirrored throughout Russia's regions. Boring, losing football often fails to persuade locals to turn out. In the cycle of decline, attendances wither as the local team falls down the table. Match-day income dries up and sponsors lose interest. For most, though, the promise of the World Cup and its commensurate stadiums point towards a brighter future.

In some of Russia's cities, even having a roof over the stadium is an advance. In Kazan, though, sport always carries a wider significance. It is tied to Tatarstan and the Tatar nation. Sporting events give voice to the region. The World Cup, the largest of them all, renders this unique corner of Russia a global destination. As Nurmeev says, the World Cup "will be the biggest chance to showcase the city's strengths to the world that has come our way so far."