In this edition, there's the latest on Arsenal and Manchester City scrapping for the signature of Lyon's Champions League star Houssem Aouar. Plus: Frank Lampard wants Chelsea to get a move on in the Kai Havertz saga.

Manchester City approached Lyon about midfielder Houssem Aouar days after he shone as Pep Guardiola's men were stunned 3-1 in the Champions League quarterfinals, sources have told ESPN, but face competition from Arsenal, who have already held talks with Lyon's sporting director Juninho.

Arsenal's sporting director, Edu, called his Brazilian compatriot to enquire about Aouar, and mentioned midfielder Matteo Guendouzi as part of a potential swap deal, plus cash. Sources have told ESPN the meeting did not include details about a fee, though Lyon and Arsenal are due to talk more for a player valued around €50 million.

City are also keen, with Guardiola a long-term admirer, and the 22-year-old's name is on a list of creative midfielders the former Premier League champions are looking to recruit this summer. 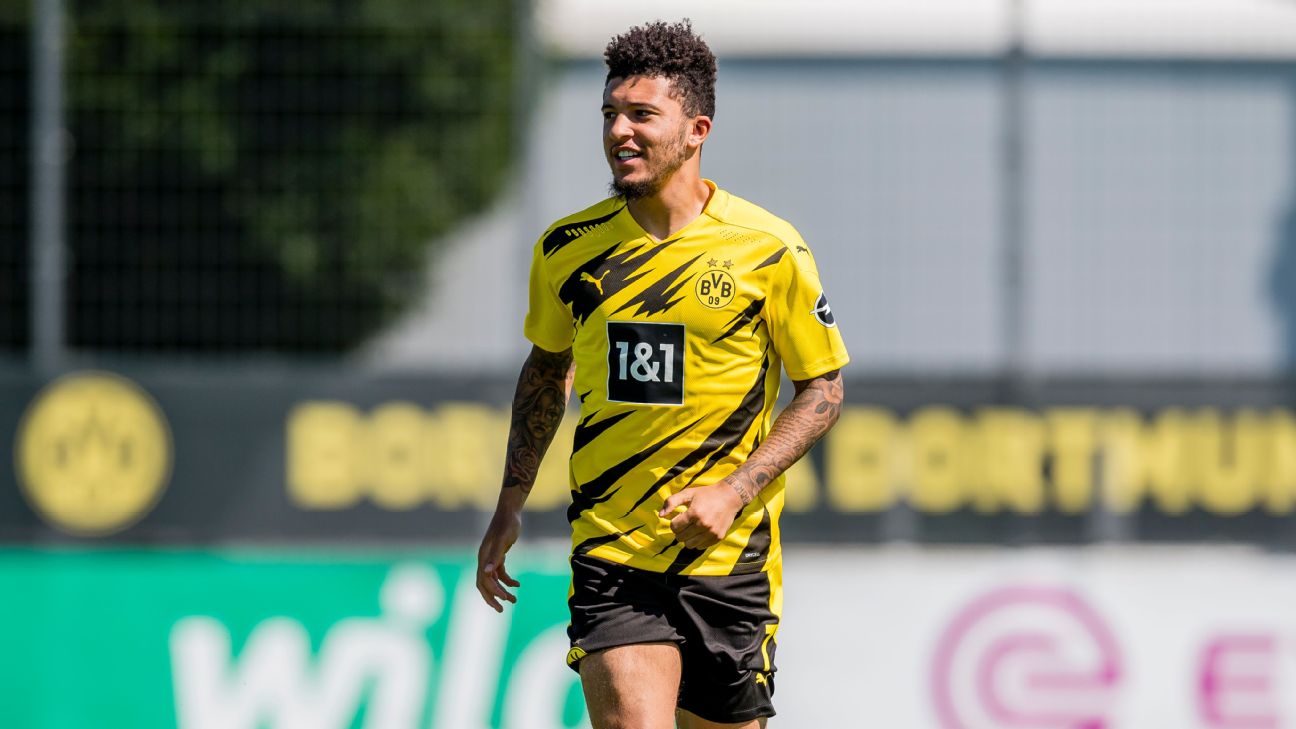 Lyon have told Aouar that they would let him go this summer despite his contract expiring in June 2023. The France under-21 international -- he has been called up to the senior squad by coach Didier Deschamps but is not capped yet -- is ready for a big move abroad and has impressed with his displays in the Champions League this month.

Juventus have also been linked with him, according to Italian media, and sources have told ESPN that Leonardo, the PSG sporting director, has also met the player's agents to register his interest.

Aouar is now on a break following Lyon's exploits in the Champions League and will spend the time making a decision on his future. -- Julien Laurens

Bayer Leverkusen have reportedly set a deadline of Aug. 28 to resolve Kai Havertz's future but Chelsea boss Frank Lampard wants the situation to be resolved sooner, so the 21-year-old can start preseason at the club, sources have told ESPN.

The first-team squad are due to return next week and sources have told ESPN that the Chelsea coaching staff left for their summer holidays believing Havertz would have signed for the club by the time preparations for the 2020-21 campaign began.

Negotiations are ongoing between the two clubs, with Leverkusen finally showing signs of budging from their £90m valuation. Chelsea have submitted two offers and while they had initially hoped to land the Germany international for £70-75m, the end figure will now be slightly higher as they edge closer to a compromise.

Havertz is set on a move to Stamford Bridge with personal terms already agreed in principle. Lampard, who is not actively involved in negotiations with director Marina Granovskaia and technical advisor Petr Cech leading the chase, is keen to develop an understanding between Havertz, Timo Werner and Hakim Ziyech -- three new signings that he hopes will revolutionise Chelsea's attack.

Werner and Ziyech already began integrating with the group by taking part in first-team sessions prior to the summer break and while Leverkusen are trying to force Chelsea's hand by suggesting talks will end when their own preseason camp begins in a week, Lampard already believes the quicker Havertz can join them, the better. -- James Olley

Julien Laurens thinks it will be difficult for a swap deal including Alexandre Lacazette and Thomas Partey.

Atletico Madrid are desperate to keep their squad together this summer but Diego Simeone fears losing top stars Thomas Partey or Jan Oblak if their attractive buyout clauses are met, sources have told ESPN.

The club are in a more delicate financial situation than most amid the coronavirus pandemic, with the coach and his team taking a temporary 70% pay cut in April, and CEO Miguel Angel Gil Marin said this week they'll "make three or four changes at most" this summer.

Atletico's real worry, though, is having to replace, or cope without, Partey -- available for €50m and heavily linked with Arsenal -- or Oblak, whose €120m clause hasn't stopped Chelsea from taking an interest after losing faith in Kepa Arrizabalaga.

Atletico have suffered in recent years after setting affordable buyout clauses which big clubs have been happy to meet. A year ago, they lost the spine of the team -- Antoine Griezmann to Barcelona for €120m, Rodri to Manchester City for €70m and Lucas Hernandez to Bayern for €80m -- in one transfer window.

Their stance this summer is that no key player will be sold for less than his release clause, although that would be tested by a serious cash offer or a reasonable player exchange. -- Alex Kirkland and Rodrigo Faez

There's growing concern at Real Madrid at a lack of offers for Gareth Bale and James Rodriguez, with the club eager to move on both out-of-favour stars before the squad returns for preseason training.

The pair were both left out entirely for Madrid's Champions League round-of-16 defeat to Manchester City earlier this month and barely featured before that when La Liga restarted.

Sources close to Bale told ESPN he asked not to travel to Manchester, knowing he wouldn't play. That situation is untenable but finding a new club for the Wales forward is difficult given his high wages and Madrid's reluctance to let him go without receiving a substantial fee.

There has been interest in James this summer, with the Premier League and Serie A both touted as potential destinations, but a formal offer is yet to arrive at the Bernabeu. The club are optimistic that will change before the end of the transfer window.

"I'd like to know where I'm going too. It could be days or weeks until I know," the Colombia international said this week. "When you see you don't get the same opportunities as your teammates it's difficult... [last season] is one of the biggest disappointments of my career."

The relationship between coach Zinedine Zidane and both players is strained, hence the desire to find a resolution in both cases before the end of the summer break, with the squad due back in Madrid the last weekend of August. -- Alex Kirkland and Rodrigo Faez

Manchester City's decision to honour recently departed midfielder David Silva with a statue at the Etihad Stadium is unlikely to be the last such tribute in English football, with sources telling ESPN that Manchester United have been in talks with supporters' groups in recent months over the formation of a "Legacy and Commemoration" committee to assess proposals for recognition of the club's greats at Old Trafford.

United have statues around their stadium honouring Sir Alex Ferguson, Sir Matt Busby and legends Denis Law, George Best and Sir Bobby Charlton. And there have been long-standing efforts by supporters to persuade the club to deliver a permanent tribute to Jimmy Murphy, Busby's assistant manager, who helped guide United through the aftermath of the Munich air tragedy in 1958.

The push for a Murphy statue prompted United to propose a committee to consider similar ideas due to the number of requests for other former players and prominent figures.

A source told ESPN that it is not a straightforward process as the club have already named two stands after Sir Alex and Sir Bobby and there are statues outside the ground. With plenty of great names in the club's history, United want to ensure that every one is given due consideration when tributes are proposed. -- Mark Ogden

Manchester United's summer signing Marc Jurado will not be allowed to train with his new club for two weeks because of UK quarantine rules, sources have told ESPN.

United have received international clearance for the defender, who will join from Barcelona, but Jurado will have to isolate for 14 days before meeting his teammates with COVID-19 restrictions still in place for arrivals from Spain.

The 16-year-old turned down a contract offer from Barcelona to move to Old Trafford -- the same move made by former Spain international Pique in 2004. Jurado is expected to join Neil Ryan's under-18s once he is allowed to train at United's Carrington training base. Neil Wood's U23s, who are also back in training, have been notified that they have been promoted into Premier League 2 Division 1 after the last season's final table was decided by points per game. -- Rob Dawson

It could be a special few days for Bayern Munich's Alphonso Davies. The revelation of the season can win the Champions League with Bayern against PSG on Sunday night in Lisbon at only 19 years old, after an incredible breakthrough campaign.

Then, in Bilbao next Sunday, a week after the men's final, it could be his girlfriend's turn to do the same. The star left-back is dating fellow Canadian Jordyn Huitema, the 19-year old prodigy, who plays for ... PSG. Huitema and her teammates face Arsenal in the quarterfinals this Saturday. In the semifinals, she could then face Bayern, who take on Lyon in the last eight.

Davies and Huitema, both from Vancouver, have been together for three years, way before they both became famous. They would become the first couple to win the Champions League. -- Julien Laurens

Choupo-Moting the new hero of Paris as shirts sell out

If you like Hollywood-style stories in football, you would have loved the finale of PSG vs. Atalanta in the Champions League and the unlikely hero role played by Eric Maxim Choupo-Moting, coming on late to win the quarterfinal in the final minutes. If the Stoke "legend" is now your favourite player, however, good luck if you want to buy his shirt.

Following his exploits from last week, the PSG stores in the French capital have sold out all their Choupo-Moting shirts. You can't find one anywhere. The club had anticipated a Choupo-mania wave by ordering a big stock straight after the Atalanta win just in case and they all went in the space of a few hours. On the other hand, Neymar and Kylian Mbappe's shirts are still available in their droves.

A new stock of Choupo-Moting shirts is due ahead of Sunday's final against Bayern Munich, where the club expect sales to be big. PSG sold over one million shirts worldwide last year with Neymar and Mbappe the two most popular players.

But that was before Choupo-Moting took centre stage against Atalanta... -- Julien Laurens