The legendary professional wrestling announcer never misses a game. Home or away. Day or night. Rain or shine.

Ross loves the Sooners. So much so that his WWE entrance music was “Boomer Sooner.”

But that isn’t the only reason Ross' favorite place to be on fall Saturdays is Owen Field. It’s not even the biggest.

Every time he goes to a game, Ross feels his father beside him.

And it was through his dad that Ross’ love for football first began.

“It runs a lot deeper for me than I like the game,” Ross said. “I really believe my dad is there tagging along.” 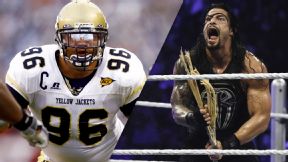 Low: The leglocks that tie college football and wrestling
From Ric Flair to the Rock and Ron Simmons to Roman Reigns, the common thread between many of pro wrestling's legends is the time they spent on the college football field.

Ross grew up an only child on a 160-acre cattle ranch in Westville, Oklahoma, a town of a little more than 1,000 tucked near the Arkansas border. On top of working the farm, J.D. Ross had a day job with the highway patrol.

“When your parents work out of the house, you become a latchkey kid, and you subconsciously gravitate to your parents, to find something you know they’re interested in that you can have in common,” Ross said. “Other than just being their son.”

For Ross and his dad, that commonality was John Wayne movies and college football.

Like most Okies, J.D. Ross loved football, whether it was Westville High on Friday nights or the Sooners on Saturday afternoons. Before long, Jim Ross grew infatuated with the game, too.

“Anything I could to ingratiate myself to my father -- who was bigger than life to me -- he was my Bear Bryant,” Ross said. “I never met Bear Bryant, but I gather he was a lot like my dad.”

Like the Alabama coach, J.D. Ross was a large man who had a deep voice and smoked cigarettes. And Ross and his son were never closer than when they’d listen to or watch football together.

Jim Ross can vividly recite the conversations he had with his dad about Joe Don Looney, Bud Wilkinson’s first junior college player, who defeated Syracuse with a game-winning touchdown in his debut with the Sooners.

Ross recalls he and his father watching Notre Dame and Michigan State slug it out to a 10-10 tie on ABC in 1966, and his dad pointing out any time Bubba Smith would smash an Irish running play.

And to this day, Ross can remember how he and his dad were both in awe of seeing Alabama linebacker Lee Roy Jordan make 31 tackles, as Bryant’s Crimson Tide downed Oklahoma 17-0 in the 1963 Orange Bowl.

“I wanted to be Lee Roy Jordan after that,” Ross said.

“Football was part of my upbringing,” Ross said. “And all of my favorite memories of my dad included us talking about football.

“It linked us together.”

Like his father, Ross later became a standout football player for Westville before going on to a hall of fame broadcasting career in wrestling. His dad died of pneumonia at age 62, not long after retiring.

That’s one reason why Ross won’t retire, though he also enjoys his busy life. At the moment, he’s writing another book, he hosts a wresting podcast, and he commentates on boxing, mixed martial arts and, of course, wrestling.

But nothing tied Ross to his dad like football. And football is what keeps him still close now.

In 2003, when Oklahoma played at Alabama, Ross found the goal post that Bryant used to always lean against, and leaned on it himself.

“But he was there in spirit.”