ST. LOUIS -- The day after Aaron Judge won the Home Run Derby, Joey Votto -- who is to the art of hitting a baseball what Einstein is to physics -- took his turns in batting practice, and in between, he chatted about the degree of difficulty in Judge’s feat. Votto gestured with awe to that far-away area in right-center field where Judge had clubbed the ball repeatedly and noted where Judge had bashed the ball and how consistently. The feat was incredible; the exhibition of hitting was incredible.

Judge will not be part of this year's Home Run Derby, as he told reporters back in February. Neither will Shohei Ohtani, who is on the disabled list with an elbow injury. The powers that be presumably would love for Mike Trout to say yes, but he has never participated in the Derby.

If those omissions hold, then what would be the best field for what has been one of baseball’s highest-rated events on July 16 in Washington?

Conditions are absolutely perfect for a Davids versus Goliaths Derby, the Little Guys versus the Big Guys.

At this writing, players among the MLB leaders in home runs include Jose Ramirez, who is listed at 5-foot-9, 165 pounds. He is probably a little heavier than that, but he is no taller than 5-foot-9. And there's Khris Davis, the prolific Oakland slugger, listed at 5-foot-10 and 195 pounds. Mookie Betts checks in at 5-foot-9, 180 pounds.

Atlanta’s Ozzie Albies has 16 homers already, at 5-foot-9 and 165 pounds. Javier Baez, who leads the Cubs with 14 homers, is reportedly 6-foot tall. On Saturday, Baez chatted about the concept of participating in the Home Run Derby, smiled and said he'd like to do it. Gleyber Torres has stunned the Yankees with his power since he was promoted to the big leagues, with 13 homers in his first 159 at-bats. He is supposedly 6-foot-1, but again, I’d take the under.

You get the picture. This season has underscored the reality that unlike in the NBA or the NFL, players of just about any size can thrive in MLB. You don’t have to be of Aaron Judge stature, 6-foot-7 and 282 pounds; you can be like Willie Mays, a 5-foot-10, 170-pound outfielder who mashed 660 homers, or Henry Aaron, who was listed at 6-foot tall as he passed Babe Ruth and became baseball’s home run king in 1974.

In that spirit, it could be interesting to develop two sides of a bracket, with four Little Guys on one side and four Big Guys on the other, with a David vs. Goliath final.

On the Big Guys side of the bracket, you could have Bryce Harper, who has indicated in the past that he planned to do the Derby this year. And Giancarlo Stanton, a past winner and someone who has greatly enjoyed the event. Plus J.D. Martinez, the Boston slugger who has conquered Fenway Park and just about every other ballpark in which he has played this year. And George Springer, the World Series MVP. Then there's the Braves’ Freddie Freeman, who is fully capable of putting on a big-time batting practice show. And Manny Machado, who is having a strong first half and will be the most talked about player in baseball leading up to the July 31 trade deadline.

If Votto put his mind to it, he might really enjoy the technical and strategic aspect of the Derby.

By the way: If Judge changes his mind and decides at the last-minute that he’d like to do the Derby, I’m sure Major League Baseball would be thrilled to fit him in.

The Yankees and Red Sox are destined for a summer-long steel cage match for the American League East title, with more at stake for the archrivals than at any time since the epic 1978 race that ended with Bucky Dent’s homer. The October path for the loser will be incredibly stark. The team that finishes second will have to survive the one-game wild-card playoff, facing perhaps the Mariners’ James Paxton or Houston’s Justin Verlander, and if the other wild-card team is Seattle, that will probably mean a division series against the defending champion Astros. This is why some executives believe both teams will be all-in during the trade deadline bidding wars -- trying to find the one or two players who could be difference-making.

• Miguel Sano was regarded as a superstar prospect, he made the 2017 All-Star team, and he was part of the Home Run Derby. Less than a year later, his career hangs on the edge of relevance. Amid concerns about his conditioning, Sano has not established himself at any position, and in recent winters, analysts have bypassed big slugger DH types because of the attached roster inflexibility. Sano is in jeopardy of following the same path as Jesus Montero, the once-touted Yankees prospect who was out of the big leagues by his 27th birthday. 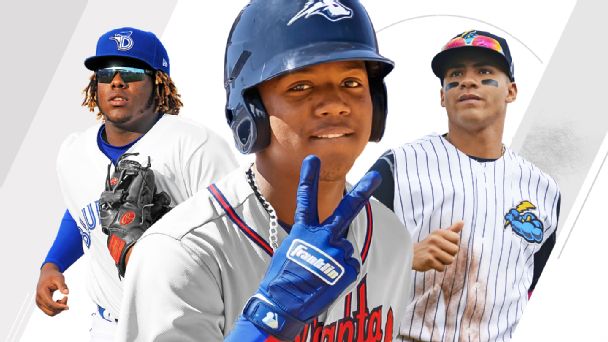 • Yes, the St. Louis Cardinals came the closest to arranging a deal for the Orioles’ Manny Machado last winter before pulling back, and Baltimore hopes that the Cardinals re-engage this summer and create an offer from their stockpile of arms, which includes Jack Flaherty, who pitches on Sunday Night Baseball tonight. But it might be that the Cardinals’ focus in the trade market will be augmenting their bullpen. Someone such as the Royals’ Kelvin Herrera might be more valuable to St. Louis than Machado.

• Flaherty makes his start on Father’s Day, and on Saturday, he talked about being raised by Eileen Flaherty, a single mom. Jack Flaherty was adopted and says Eileen made incredible sacrifices for him and his brother, Grady.

• Jose Quintana starts for the Cubs against Flaherty. His father was a civil engineer, and when Jose was a teenager, he encouraged him to pursue a secondary education in accounting. When Jose chose to play baseball instead, Abel Quintana supported that choice, encouraging him to focus on the work. Jose Quintana bounced from organization to organization early in his professional career, from the Mets to the Yankees and eventually to the White Sox, and he said his father’s advice during those tough times was to enjoy the games. “He’s my hero,” Jose Quintana said of his father.

• Trevor Hoffman will be inducted into the Hall of Fame this summer, and before that event, he is greatly looking forward to spending time with the legendary Nolan Ryan on the back porch at the Otesaga Hotel. Trevor’s father, Ed, was known as the singing usher at The Big A and got to know the Angels’ best pitcher at the time: Ryan. But in Trevor Hoffman’s baseball travels, he has never met the pitcher known as The Express to share stories about his dad.

Hoffman told this story, among many, many others, on our Call To The Legends podcast from Thursday.

Friday: Karl Ravech on the young players emerging in MLB, the injury to Evan Longoria and the Sano demotion; Jessica Mendoza on the Cubs and the Cardinals; a poll of which movie fail is greater.

Thursday: Adnan Virk unveils his top 10 baseball movies of all time; Keith Law on the remarkable emergence of the Nationals’ Juan Soto; Kyler Murray’s unusual decision (that we hope he changes, for his sake); Sarah Langs plays the Numbers Game; Baseball Tonight’s Power 10.

Wednesday: The Brewers’ Josh Hader joins the podcast to discuss his unusual delivery and its unusual impact on hitters; Boog Sciambi on Mike Rizzo’s defense of Bryce Harper and Miguel Cabrera’s injury, as well as a Gleyber Torres trade he would make; Paul Hembekides on Max Scherzer’s MVP chances; Hank Aaron tells stories.

Tuesday: Jerry Crasnick on how the Pirates were hurt by the enforcement of an unwritten rule while violating another unwritten rule; Roch Kubatko with a deep dive into the Orioles’ plans for Manny Machado, Zach Britton, Buck Showalter and Dan Duquette; Sarah Langs and The Numbers Game.

Monday: Tim Kurkjian on a call reversal he has never seen before, from the Astros and Rangers; conversations with Brandon Nimmo and Seth Lugo of the Mets; Todd Radom’s weekly quiz.